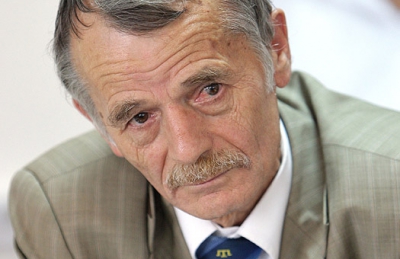 Almost two years after Russia banned world-renowned Crimean Tatar leader Mustafa Dzhemilev from his native Crimea, a court in Simferopol has ordered his arrest.  In applying for the detention order, the prosecutor argued not only that there were three charges against the Ukrainian national under Russia’s Criminal Code, but that Mustafa Dzhemiliev « is hiding from the investigators and the court »

News of this ‘arrest warrant’ was announced by lawyer Dzemil Temishev who was clearly present in the Simferopol court on Jan 20.  It was he who reported the grotesque grounds given for the order, with the investigators and prosecutor also claiming that Dzhemiliev does not have a permanent place of residence in Crimea.  This is a particularly cynical lie since there is no problem with place of residence, but with the aggressor nation which seized control and exiled Dzhemiliev from his homeland.

Temishev reports also that Russia has declared Dzhemiliev on the federal wanted list.  It can be safely assumed that Moscow would not succeed in getting the 72-year-old Ukrainian MP, Parliamentary Assembly of the Council of Europe representative, former Soviet political prisoner and laureate of numerous international awards on the international wanted list.

Temishev does not report what the three articles of the Russian Criminal Code refer to, but Radio Svoboda’s Crimean Service writes that Mustafa Dzhemiliev is accused of illegally crossing the border and of unlawfully holding weapons and ammunition.

Russia and the leaders it installed in Crimea reacted with aggression and repressive measures to the civic blockade first of goods, then also of electricity, which began on September 20, 2015.  They have particularly gone for anybody linked with Mustafa Dzhemiliev, Refat Chubarov and the third initiator of the blockade Lemur Islamov.  Dzhemiliev’s wife Safinar was summoned for interrogation, and Russia recently refused, in clear breach of a bilateral agreement, to return Dzhemiliev’s son Khaiser to Ukraine from a prison inside Russia.

Instead of responding to the legitimate human rights demands put forward as conditions for removal of the blockade, including the release of all political prisoners, Russia has resorted to absurd accusations and smear campaigns.  There have even been hysterical claims that Dzhemiliev and Chubarov are recruiting fighters for ISIS and threats to prohibit the Mejlis or Crimean Tatar representative body as an ‘extremist’ body.

Mustafa Dzhemiliev was just 6 months old when the entire Crimean Tatar people were deported from their native Crimea.  He devoted decades of his life to the peaceful struggle for his people’s right to return to their homeland.  He spent 15 years in Soviet labour camps.  There and later he gained world renown for his unwavering commitment to his people and to peaceful methods of defending fundamental rights.  He has been nominated for the Nobel Peace Prize at least twice, and has received countless honours throughout the world.

It was just months before the seventieth anniversary of the Deportation that Russia invaded and annexed Crimea.  When attempts to convince Crimean Tatar leaders that this was not a catastrophe failed, Russia banned first Mustafa Dzhemiliev, and then Refat Chubarov from Crimea.  There have since been systematic attempts to crush the Mejlis and intimidate Crimean Tatars, and the highest-ranking Mejlis leader remaining in Crimea, Akhtem Chiygoz has been in detention for a year on absurd charges.

Mustafa Dzhemiliev has yet to respond to this latest move, however Refat Chubarov writes on his Facebook page that Dzhemiliev laughed when Chubarov was declared on the same wanted list, saying this was not right that he had been ignored.  Unfortunately, no longer.

The arrest warrant against Chubarov was issued in October 2015, some 15 months after Russia had banned him from the territory covered by the federal wanted list.  He was accused of “encroaching on Russia’s territorial integrity” by insisting that Crimea is Ukraine.

The thugs who invaded and annexed the men’s homeland have now ordered the arrest of Mustafa Dzhemiliev whom they wish to charge with seeking to enter his native Crimea.