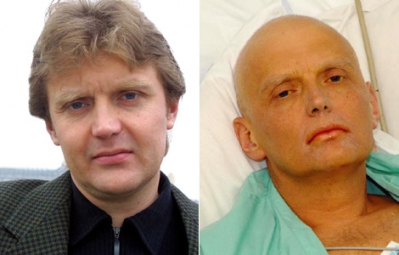 While observers around the world were sharing Marina Litvinenko’s relief that the likely role of Russian President Vladimir Putin’s role in her husband’s murder had finally been clearly stated, pro-Kremlin media were in overdrive trying to undermine the report.  Plausibility was difficult, but clearly seen as expendable given a sufficient number of ‘experts’ and outrageous lies.  It had been tried before after the downing by a Russian-made Buk Missile of the MH17 passenger plane, so this one, about a person few know about and some obscure poison was easy.

NTV, for example, interviews Sergei Sokolov, described as the former head of Boris Berezovsky’s security guards.  He claims that Alexander Litvinenko poisoned himself through careless treatment of radioactive polonium that Litvinenko himself stole from a base in Kazakhstan.

This story appears to have first been plugged by Edward Jay Epstein back in 2008.  This was reported at the time by Mary Dejevsky, a British journalist who very often takes a line many of us would view as sympathetic to the current regime in Russia. In this case, both suggest ‘illicit nuclear trading’, with Berezovsky playing a leading role.

The version does not explain why the polonium trail was left by Andrei Lugovoi and Alexei Kovtun, not by Litvinenko, nor a huge amount of other evidence available to Scotland Yard from the beginning.

Both NTV and Life News have come up with ‘experts’ stating that polonium didn’t make sense.

Igor Korotchenko, Chief Editor of the journal National Defence tells NTV viewers that modern security services don’t use such methods as polonium because they can’t be hidden, and they cause a huge international scandal.  ‘Therefore’ it was obviously done to both remove Litvinenko and to try to point the finger at Russia.

Life News found an ‘expert’ to confirm that polonium was too expensive to be used as a murder weapon.  Boris Myasoyedov, identified as a member of the Russian Academy of Science, explained that using polonium would be economically inexpedient since there are numerous compounds which are more effective and difficult to discover.   He asserts that for the first 138 days  the poison is very easy to discover, unlike a huge number of other substances.  “Polonium is simply last century”, he says.

Assiduous attempts to prove that polonium cannot be concealed ignore the fact that those who ordered the killing doubtless wanted Litvinenko himself and others to know that he had been poisoned.  Those who chose to kill Boris Nemtsov so close to the Kremlin also had their reasons.

Certainly in the case of Litvinenko, they would not have wanted the culprits to have been so easily identified, but that, according to one of the experts who testified at the inquiry, was a fatal mistake that the perpetrators could probably not have foreseen.  Norman Dombey, emeritus professor of theoretical physics at the University of Sussex, told the inquiry that the poison might not have been identified had they not carried out the murder in London where there happened to be the doctors and medical infrastructure to know who to turn to.  Samples were sent to the UK Atomic Weapons Establishment, where experts recognized the signs that polonium 210 had been used.

“Virtually all the world’s supply of that particular isotope is made at the nuclear weapons assembly plant at Avangard in Russia, ” added Dombey. “That points a finger directly at Russia. However, had it not been for the experts on hand in London, that link would never had been made.”

The media viewed avoided mention of the allegations against Putin and the FSB.  Life News, for example, mentions only the long-known accusations against Lugovoi and Kovtun.  It ends that short report by asserting that “the British court was unable to prove Russia’s interest in Litvinenko’s death”.  While Russian officials dismissed the report as of no interest, Moscow is reported to have signed a contract with the UK law firm Harbottle & Lewis for £2 million.  The money – from the rapidly dwindling state coffers – is in fees for legal consultation provided to Russia’s Investigative Committee regarding the UK Crown Coroner’s Inquiry into Litvinenko’s murder in 2006.   The payments agreed are from 2013 through 2016, with over half (£1, 171 million) due in 2016.   There is no information as to what the fees are for.

There is one other detail that not only pro-Kremlin media prefer not to mention too loudly or distort.  Scotland Yard wanted to question Lugovoi as chief suspect from shortly after Litvinenko’s death, and there was initial indignation over Russia’s refusal to cooperate, yet other factors took over and successive UK governments preferred not to annoy Moscow by bringing up the subject.  Marina Litvinenko had to fight for years to get this independent inquiry. A BBC correspondent talked of “audible gasps” on Thursday when Sir Robert Owen stated so very clearly that Putin had probably approved the killing.

The report is available to the public, and despite the lies told by Russian officials and media, all but the most vulnerable information appears to have been open.

The UK Government’s statement was read out to parliament by the Home Secretary Theresa May.  It states among other things that “There is a strong probability that they were acting under the direction of the Russian domestic security service – the Federal Security Service or FSB. And the Inquiry has found that the FSB operation to kill Mr Litvinenko was probably approved by Mr Patrushev, the then head of the FSB, and by President Putin.

The Government takes these findings extremely seriously – as I am sure does every member of this House. We are carefully considering the report’s findings in detail, and their implications. In particular, the conclusion that the Russian state was probably involved in the murder of Mr Litvinenko is deeply disturbing. It goes without saying that this was a blatant and unacceptable breach of the most fundamental tenets of international law and of civilised behaviour. But we have to accept this does not come as a surprise. The Inquiry confirms the assessment of successive governments that this was a state sponsored act.”

Russia has blocked a UN tribunal on the Russian-made missile attack on MH17.  It is continuing its occupation and persecution of opponents in Crimea, as well as its undeclared war in Donbas.

Russia’s Investigative Committee is currently pushing a version for the murder of Boris Nemtsov that claims no political motive and deflects attention from people close to Ramsan Kadyrov, Putin’s protégé in Chechnya

Putin made his position clear in March 2015 when soon after Nemtsov’s murder and outrageous remarks from Kadyrov, he bestowed state awards on Ramsan Kadyrov who had justified the killing and on Lugovoi “for courage and daring demonstrated in carrying out work duties in conditions linked with risk to life”.

So how many more crimes will be tolerated?