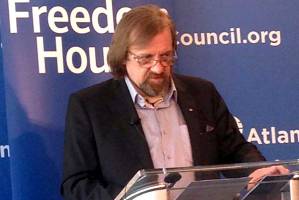 All post offices in Russian-occupied Crimea have been sent a list of Crimeans supposedly suspected of or sentenced for ‘extremism or terrorism’, and told to inform Russia’s FSB if any correspondence arrives for them or anybody asks for it.  The list includes recognized political prisoners Oleg Sentsov and Oleksandr Kolchenko, as well as Crimeans forced out of Crimea because of their opposition to Russian occupation.

Russia’s Sova Centre which monitors ‘extremism’ and xenophobia considers that the FSB is clearly exceeding its powers.

Radio Svoboda’s Crimean Service has revealed pages of the document which it says was sent at the beginning of 2016 to all post officers in Crimea.

The list includes Crimean filmmaker Oleg Sentsov; civic activist Oleksandr Kolchenko; Gennady Afanasyev and Oleksy Chirniy.  All four opponents of annexation were arrested in May 2014, tortured in Simferopol and then taken illegally to Russia and tried for supposed part in a ‘terrorist plot’.  There was no evidence of such ‘terrorism’ at all, only ‘confessions’ from Afanasyev and Chirniy, which as ‘cooperation’ with the FSB investigators got them minimum (7-year) sentences.

The FSB miscalculated catastrophically in this case which was very clearly meant to be a show trial of supposed ‘Right Sector’ terrorists.  Sentsov and Kolchenko denied all charges from the outset, and Afanasyev, brought into their trial on Aug 31, 2015, retracted all previous testimony, stating that it had been tortured out of him.

Sentsov, Kolchenko and Afanasyev have all been declared political prisoners by the Memorial Human Rights Centre and the release of all four men is demanded by Ukraine and required under the Minsk Agreement.

The nature of the ‘case’ was demonstrated in the fact that the men were all added to Russia’s notoriously long ‘list of terrorists and extremists’ before any verdicts had been passed.  The same list contains people like Alexander Byvshev, the Russian poet and now dismissed teacher who was prosecuted for writing a poem against Russia’s annexation of Crimea. 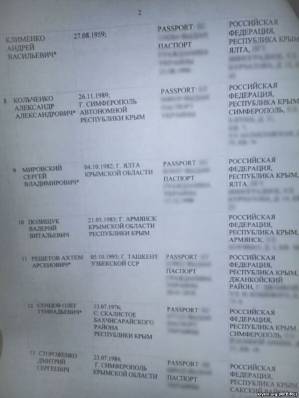 Crimean postal workers have also been instructed to report on people asking about mail for Andriy Klymenko, a well-known Crimean civic activist and journalist.  Klymenko is now in Kyiv, Head of the Supervisory Board for Maidan of Foreign Affairs and the author of ‘Human Rights Abuses in Russian-occupied Crimea’, an important report published by Freedom House and the Atlantic Council.

Any ‘extremism’ is clearly linked to Klymenko’s unwavering determination to expose Russia’s rights abuses in his native Crimea.

The list also contains the name of Mustafa Yagyaev, the imam of a village mosque in Crimea, who received a 2 year suspended sentence and was prohibited from “any activity involving the circulation of information” after three colleagues claimed that he had made comments about Crimea returning to Ukraine, Russians, etc.  Purely on the basis of an implausible denunciation, he was charged with inciting enmity with the use of force or threatening to use it.

Journalist Anna Andriyevska has also ended up on the list, with the FSB clearly wanting to snoop on her relatives and friends, since she herself is also in Kyiv.

There is little new about this, except that now the postal service has been drawn in since the FSB have already used heavy-handed measures against two journalists in Crimea because of their previous working relationship with Andriyevska, as well as the journalist’s parents.

On March 13, Natalya Kokorina, a journalist working for the Centre for Investigative Journalism  was detained and questioned for around 6 hours.   She had been taken to the FSB office after a 4-hour search was carried out of her parents’ home.  In April 2015 Anna Shaidurova, former editor and journalist of the same Centre, was taken away for questioning by the FSB.

The treatment of Kokorina coincided with a search carried out of the home of Anna Andrievska’s parents.  Andriyevska is the author of an article which the FSB has decided encroaches on Russia’s ‘territorial integrity’

The article “Volunteers of the Crimea [Krym] Battalion”  is about people providing support for the Krym [Crimea] volunteer battalion fighting in Donbas, and for other Crimean units fighting within other battalions. The article is largely about those civic groups and individuals who are helping  to provide Crimeans fighting with food and other assistance. It contains the following .

The criminal proceedings that Russia has brought against Andriyevska (in absentia) carry a possible sentence of 5 years.  Russian Tatar activist Rafis Kashapov is serving a 3-year sentence for criticizing Russia’s invasion and annexation of Crimea.

The FSB are certainly, as the Sova Centre says, exceeding their powers – in a way depressingly reminiscent of their KGB predecessors.