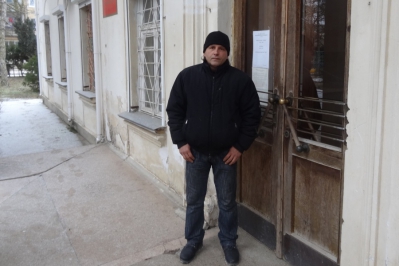 The trial is ending in Russian-occupied Crimea of a Ukrainian farmer accused of  ‘publicly insulting a police officer’.  The circumstances of this case, and previous run-ins over recent months give serious grounds for believing that Volodymyr Balukh is facing systematic persecution for taking an openly pro-Ukrainian stand.

44-year-old Balukh first raised the Ukrainian flag over the home he shares with his common-law wife in December 2013 during Euromaidan.  The flag remained after Russia’s annexation of Crimea.  In an interview given to Nadezhda Prusenkova from Novaya Gazeta, Balukh explained that he does not recognize the annexation and did not take Russian citizenship.  The problems began on April 30, 2015.

On that day he was at the other end of the village helping his mother with her stove when a car turned up with two men.  One was a police officer, the other, he later found out, from the FSB [Russian security service].  They demanded that he come with them, but he refused, saying that he would only if there was a warrant.

Unnerved by the visitation, he asked a friend to go over to his home and see what was happening.  After the friend returned and said that the house had been entered and that the people were saying they were from the FSB, Balukh decided to stay away, and only returned to his home on May 10.

By that time the FSB had turned up at his mother’s place 4 times.  Both his home and his mother’s had been turned upside down.  The Ukrainian flag had been ripped down.

There was relative peace for around 6 months from the FSB, however the Crimean Human Rights Group reports that in July 2015 police officers detained him for 72 hours, claimed that he had refused to comply with the legitimate demands of police officers’.  Balukh believes that he was detained to stop him attending a meeting with Vladimir Konstantinov, parliamentary speaker because of Balukh’s openly expressed opposition to Russia’s actions in Crimea.  After 72 hours, he was brought before a court which fined him for supposedly drinking alcohol in a public place.

The second visitation was on Nov 14, early in the morning.  Balukh says that first a man in plain clothes walked straight into his bedroom and demanded to know who he was.  Then a woman turned up, said “yes, it’s him”, at which point two men in masks and another man burst in and became beating him and then dragged him out of the bedroom and forced him into their car.

Once again the actions were claimed to be in connection with a theft, this time of a car.  The officers either suffer from acute lack of imagination or were intent on demonstrating lawlessness, since they came up with exactly the same story about a supposed drunken offer made in a café.

Having found nothing at all incriminating, they opted for Article 319 of the Criminal Code – ‘insulting a police officer’.  This has the advantage that it’s next to impossible to prove innocence.

The charges pertain to the events that morning when Balukh asserts that he was beaten by the police.  One of the officers – Yevgeny Baranov claims that Balukh tried to run away and they therefore used handcuffs, with Balukh supposedly using foul insulting language.  In the indictment this is presented as denigrating Baranov’s honour, infringing the normal activities of the police and undermining their authorities.

“It turns out, when they detain you, kick you around the kidneys and put their foot on your head, you’re supposed to express yourself solely using the language of Dostoyevsky, ” Balukh says drily.

The court debate was due on Jan 21, and the final court hearing and verdict can be expected soon.  Article 319 carries either a fine that Balukh would probably have difficulty paying, or compulsory labour.

There have been a number of court hearings on administrative charges linked with the Ukrainian flag, and four people received periods of community work last March literally for the Ukrainian flag and ribbons during a gathering marking the anniversary of the poet Taras Shevchenko’s birth.  The police claimed that the flag was a prohibited symbol and this was accepted by the court.

There have been similarly heavy-handed measures and unfounded administrative charges against Iryna Kopylova and Veldar Shukurdzhiyev for trying to photograph themselves with a Ukrainian flag near the monument to Vladimir Lenin on Simferopol’s square.  in that case, they were accused of holding an ‘unauthorized meeting’.  Three young people from Kerch were prosecuted back in August after marking Ukraine’s Independence Day by trying to photograph themselves with a Ukrainian flag on Mount Mitridat.  The police told them openly that they’d been detained because of the Ukrainian flag, and pro-Ukrainian words on a T-shirt, but they were charged with ‘obstruction of public order and bad language’.

It is particularly disturbing that this current trial is under criminal law, since the overtly implausible charges and other aspects of the case seem just as clearly linked with Balukh’s Ukrainian flag and his opposition to Russian occupation.