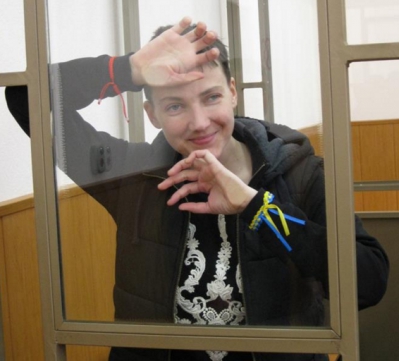 The Russian court in which Nadiya Savchenko, Ukrainian MP and delegate to the Parliamentary Assembly of the Council of Europe [PACE], is on trial is allowing verbal testimony, but consistently refusing to add documents to the case which prove Savchenko’s innocence.   With the trial hidden away in Russian Donetsk, the aim, as lawyer Mark Feygin points out, is clear.  The court appears to be allowing the defence to have its say, while in fact blocking material which exposes the cynical lies and lack of any substance to the charges against the former Ukrainian pilot.

Last week the defence questioned Andriy Ivanov, from MTC Ukraine who in 2014 installed and serviced the mobile communication towers in the Luhansk oblast.  Ivanov came vital testimony regarding Savchenko’s location when she made a call at 10.44 on June 17, 2014.

The court heard it, but refused to add the testimony to the case, claiming that this was because the evidence had been gathered on Ukrainian territory – the territory on which Savchenko was taken captive by Kremlin-backed militants before being abducted to Russia.

On Monday, the court also refused to add the letter received from the Lawyers’ Chamber of Moscow confirming that there are no geographical restrictions on where material can be obtained.

The court under presiding judge Leonid Stepanenko has also refused to allow testimony from a Ukrainian video specialist.  This provides the time when the video footage of Savchenko’s capture was shot, and is clearly also of critical importance.  Kremlin-backed militant leader Igor Plotnytsky, who was allowed to give secret testimony, claims, as does the prosecution, that Savchenko was captured around midday.  This is refuted by the mobile telephone evidence and the timing of the video.

The list of important documents, including from Ukraine’s Justice Ministry, which the court has refused to add to the case can be continued.  On Monday, Nadiya herself expressed outrage that the court is preventing her from defending herself.

Nadiya Savchenko is on her 39th day of hunger strike and is clearly weakened.