Donbas miners charged with ‘treason’ for going on strike 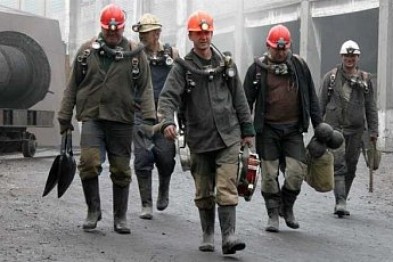 Miners in Kremlin-backed militant-controlled Makiyivka may face trial for ‘treason’ after going on strike earlier in January over unpaid wages.  According to a local newspaper, the ‘authorities’ of the so-called ‘Donetsk people’s republic’ [‘DNR’] have identified the organizers of what they call ‘sabotage’ and are carrying out a criminal investigation.

The strike at the Makiyivka mine ‘Kholodnaya Balka’ on Jan 13 was over wages arrears that had been mounting since Makiyivka and its mines came under militant control.   The first and second shifts both refused to go down into the mine.  The third shift also initially refused, but the miners were then ‘persuaded’  by the management, as in threatened with dismissal if they didn’t get down there.  Reports say that

Although some of the miners were paid a part of the outstanding wages, reports on social networks said that 132 of the strikers had been sacked.  There had also been a strike at the Chaikino Mine on Dec 29.  Although miners were paid something, many were reportedly also sacked after that strike.  The same social network reports suggest that an order was issued to not take the striking miners on at other mines.

There was initially silence about the strikes on the official website of the mining enterprise and on pro-militant media.

On Jan 23, the pro-militant ‘Makiyivka Worker’ reported the ‘DNR’ militants as calling strikes at the mines unacceptable.  The city administration’s official website reports the so-called ‘DNR energy ministry’ as saying that: “a war is waging and no sabotage is therefore acceptable and can only be viewed as treason”.  Both sources claim that the miners were “incited into mass riots and a strike” via social networks.  The same ‘ministry’ acknowledges that there are problems with wage arrears but asserts that these are temporary, and that most miners view this with understanding, but that some fall too easily under the influence of “provocateurs sent in”.

In an article entitled “How to destroy Donbas’ coal industry – instructions from ‘DNR’ and ‘LNR’ [the self-proclaimed ‘Luhansk people’s republic’], Yevhen Volchynnikov writes that after some of the state-owned mines in Donbas came under militant control, the situation at the mines affected radically deteriorated.

Volchynnikov interprets the statement from the Makeyevugol [Makiyivka Coal] enterprise that four mines are to be ‘restructured’ as meaning that the four mines are to be closed.  The enterprise owns 9 mines but there is no money for running them.  All were previously supported by the Ukrainian government.  Volchynnikov writes that the ‘occupier’ is not worried about the survival of the industry and simply wants to squeeze out as much profit as possible.

News of Donbas, which Volchynnikov is writing for, has learned  that at least one of the organizers of the Jan 13 strike was detained by the militants and badly beaten.  The website’s information about methods of force used against strikers is confirmed by Mykhailo Volynets, the head of the Independent Miners Union and another source who wished to remain unnamed.

The unnamed source, a mining specialist, believes that of the 33 mines in the area under militant control, 13 are working.  Not one of the five mines in Horlivka is working, while all six inYenakiyevo remain idle.

There is basically only one other enterprise in Horlivka.  Nobody is worried about finding jobs, the author writes.  They can go to Russia where cheap labour is needed, or go as volunteers to the front.   simply because there’s no work for them.

The specialist points out that the Makiyivka mines always worked at a loss, but before the militants seized control, around 90% of wages came from the Ukrainian state budget.  Now most of the mines will be forced to close, he says.

Volynets says that the situation with mines in the Luhansk oblast is also critical.  For December and January miners were paid a mere 20% of their wages – in Ukrainian currency 500 UAH, at a time when a kilogram of meat costs around 200.

The right to strike, to fight for their own existence has been taken away, Volynets says, with a so-called ‘law’ now in place which prohibits the creation of any other trade unions, aside from the one pocket union led my members of the occupation administrations.