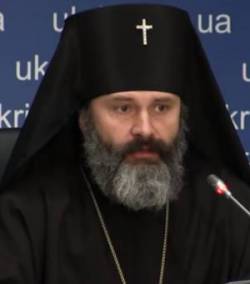 The Ukrainian Orthodox Church under the Kyiv Patriarchate is, as feared, being forced out of the Cathedral of Vladimir and Olga in Simferopol.  At a press conference in Kyiv on Jan 28,   Archbishop Kliment of Crimea and Simferopol warned that the Church is facing dissolution and destruction as the second anniversary approaches of Russia’s invasion and annexation of Crimea.

According to Archbishop Yevstratiy (Zorya) from the Kyiv Patriarchate, it is only the fear of international scandal that prevents Russia from totally driving the Church out of Crimea.  He stresses that the Church does not recognize Russia’s annexation, and will not re-register under Russian legislation.

The question of registration has, as warned back in October 2014, become one of the means by which the occupation regime is bringing all faiths, except the Orthodox Church under the Moscow Patriarchate, under serious pressure.  Up till the end of 2015, religious communities were still able to use documents under Ukrainian law to sign agreements with the electricity and water authorities.  This will now be impossible, and it is likely that the new restrictions will force a lot of remaining churches to close.

The battle to seize control of the Cathedral of Vladimir and Olga began soon after annexation.  On Jan 14, 2016 the Crimean Arbitration Court issued a ruling ordering the Church under the Kyiv Patriarchate [UOC KP] to vacate the building within the next 10 days, and to pay half a million roubles, supposedly for communal services.  Archbishop Kliment of Crimea and Simferopol has said that they will not move. At a meeting with one of the de facto leaders in Crimea, he says, he was told to go to Moscow to sort the situation out.  This he has no intention of doing, and he is blunt in suggesting that corruption is involved in the plans to remove him.  Radio Svoboda’s Crimean Service reports that the Archbishop stated back in 2014 that he had been offered 200 thousand dollars to vacate the premises.  Now a court order has been used.

Andriy Shchekun, a Ukrainian civic activist forced to flee Crimea with his family after being abducted and tortured by pro-Russian paramilitaries, believes that Ukraine’s government should formally transfer the Cathedral premises to the Kyiv Patriarchate in Crimea.  This will make it much easier for the Church to uphold its rights in international courts.

Archbishop Kliment says that the number of churches held by UOC KP has halved since Russia annexed Crimea, from 20 to 10.   One of the 10 remaining is a wooden church in Yevpatoria, the construction of which was completed in May 2014.  That church has already faced several arson attacks.   In an earlier appeal to the international community, the Archbishop mentioned the illegal seizures of the Church of the Holy Martyr Clement of Rome in Simferopol and the Church of the Intercession of the Holy Mother of God in the village of Perevalne.  The latter came after a frightening armed attack on the church and believers.  There have also been threats on businesspeople supporting the Kyiv Patriarchate that they could lose their business if they continue to provide premises for places of worship.

At the press conference, Archbishop Yevstratiy pointed out that in Crimea you can now face criminal prosecution with the charges potentially carrying a five year sentence for stating that Crimea is Ukrainian.  This is no exaggeration.  Russian Tatar activist Rafis Kashapov is now serving a three-year sentence for criticism of Russia’s occupation of Crimea, and Yury Ilchenko, a language teacher from Sevastopol, has been in detention since July 2015, almost certainly over blog posts expressing similar anti-occupation views.

Archbishop Kliment was, understandably, careful to stress that he was not making any political statements.  He recently spoke of how many of those who miss Ukraine come to their churches, although nobody speaks of politics in them.

“Russian-speakers also come here, and simply people who never went to church, but whose heart lies with Ukraine and who miss Ukraine.  They come, talk in Russian, or in Ukraine, and just communicate.  We don’t  talk about politics, that’s very dangerous.  There were occasions when people in plain clothes came to church and sat at the back. Later they made comments on what needed to be removed from the service so that it didn’t “jar”.  You mustn’t say, for example, that the good times will return”.

Archbishop Kliment responded with outrage, asking why Neofit had been “silent when Orthodox churches of the Crimean eparchy of the Ukrainian Orthodox Church under the Kyiv Patriarchate were seized in Crimea in 2014, when they abducted and tortured my parishioners Andrei Shchekun, Anatoly Kovalsky, Oleg Sentsov, Oleksandr Kolchenko and Oleksandr Kostenko?  When I asked and asked the international community, the hierarchs of Orthodox Churches of the world to defend believers of the Crimean eparchy of the UOC KP.  Where was your Christian love then, where were justice and sympathy?”   (See: Crimean Archbishop outraged by Patriarch’s call on Ukraine “to end ‘persecution of believers’”)

Four Crimean Tatar Muslims have been in custody for a year now and are facing long sentences for supposed ‘terrorism’ (See: Muslims labelled ‘terrorists’ under Russian occupation).  Crimean Tatar leader Mustafa Dzhemiliev spoke of FSB surveillance on mosques from soon after annexation, and there have been frequent armed searches of Crimean Tatar families, religious schools and mosques.

The situation with re-registration is also likely to be critical for many religious communities.  Russian legislation is more restrictive than Ukrainian with respect to believers, imposing far more onerous demands on bodies wishing to function as a legal entity.  One of the requirements is that the religious organization adds words to its association papers that Crimea is part of Russia which many are not prepared to do.  The lack of such registration means that the communities will lose the right to use and dispose of their churches, mosques, places of worship or other buildings, and will face numerous other restrictions.