Russian TV: ’Litvinenko poisoned himself’Russia pays UK law firm for ‘help’ in inquiry over murder of Kremlin criticSlain Kremlin whistle-blower’s book banned in Russia as ‘extremist’Putin Honours Chief Suspect in Kremlin Critic Litvinenko’s KillingThe Anti-Semitic Coding in Putin’s Telegram to Boris Nemtsov’s MotherBoris Nemtsov: Yes, I’m afraid that Putin will kill mePutin Cautions Kadyrov, But Gives Green Light For His ReelectionChechnya turns into terror zone as another Russian human rights defender attackedOpposition Calls Kadyrov ’Private Army’ Threat To RussiaAmnesty International’s 4 August statement. A response by the “Tribunal for Putin” initiativeRussia killed Inna’s husband, destroyed her home and give awards to the killers for ‘liberating’ MariupolRussia hides all details about soldiers killed in Ukraine as a ‘state secret’ Not Putin alone. Majority of Russians surveyed have no problem with Russia’s carnage and destruction in Ukraine Putin’s new Russian ‘citizenship’ decree demonstrates plans to annex much more Ukrainian territoryMonstrous sentences in Russia’s war against Crimean Tatar civic activists and their childrenRussia uses collaborators to ‘ask Putin’ for annexation of entire Kherson oblast Even in Russia, Putin’s ‘denazification’ claims prove no excuse for war against UkraineGlobal Initiative ‘Breaking the Vicious Circle of Russia’s Impunity for Its War Crimes’ (also known as ‘Tribunal for Putin’)Ukrainian survivors of the Holocaust demand Putin and Russia get out of Ukraine Putin miscalculated. Russia is fighting “an army of 40 million Ukrainians”
• Topics / News from the CIS countries 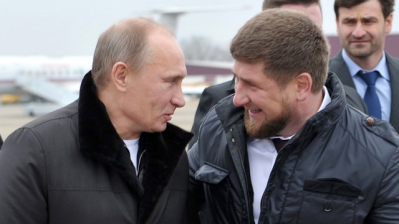 Ramzan Kadyrov, Chechnya leader and faithful ally of Russian President Vladimir Putin, has posted a video on Instagram showing opposition leader Mikhail Kasyanov directly under a sniper’s vision.  The chilling message reads: “Kasyanov has arrived in Strasbourg for money for the Russian opposition.  Who hasn’t understood, will understand”.    Kasyanov, leader of the Parnas Party, has responded by calling Kadyrov’s action “incitement to murder”.

This latest move comes after weeks in which Kadyrov has made one inflammatory remark after another about the opposition, only to be defended by Putin on Jan 25 for working “effectively”.  It also comes as Russia’s Investigative Committee has announced that it has concluded its investigation into the murder near the Kremlin on Feb 27, 2015 of opposition leader Boris Nemtsov.  The entire investigation, and the charges laid, are believed by Nemtsov’s family and associates to be aimed at deflecting attention from those who ordered the killing, with the trail widely assumed to lead directly to people very close to Kadyrov.  It is therefore of immense concern that the Investigative Committee, headed by Alexander Bastrykin, a close Putin ally, is pushing a version of the murder which accuses minions of murdering Nemtsov for condemning the Charlie Hebdo killings in Paris  version of the murder

The sniper sights aiming at Kasyanov, together with close Nemtsov associate Vladimir Kara-Murza, came in reaction to a scurrilous feature on Kasyanov by the pro-Kremlin Life News TV.  That also claims that Kasyanov’s main purpose for being in Strasbourg was to get money.  It is a standard form of anti-opposition propaganda used in the government-controlled media which never mentions the generous financial assistance almost certainly provided to Kremlin allies in the West like Marine Le Pen from the far-right National Front.

Over recent weeks Kadyrov has ranted, including in an Izvestia article, about those he calls “enemies and traitors of Russia”, promising that the “jackals” who he claims want to destroy Russia will be punished”.  In less murderous mode, he has also suggested that Putin’s opponents should be put in a psychiatric ward.

The Izvestia comments and others preceded Putin’s defence of Kadyrov.  So too did the publication of the British public inquiry into the murder of Alexander Litvinenko.  That found that the head of the Russian FSB and Vladimir Putin himself had “probably” played a role in the former FSB agent and Kremlin critic’s hideous murder through radioactive polonium.

There are other deaths of Putin critics abroad and in Russia which have come under scrutiny over recent weeks.  All murders in Russia have either remained ‘unsolved’ or have resulted only in arrests of those believed to have actually carried out the killing.

The images posted by Kadyrov are terrifying also because of the presence of Vladimir Kara-Murza, who almost died last year in what was recently confirmed to have been yet another mysterious poisoning.

Kadyrov had just defended one of the people named as a suspect in the Nemtsov killing.  Lugovoi, also a former FSB officer, was honoured “for courage and daring demonstrated in carrying out work duties in conditions linked with risk to life”.

The UK report and its direct accusation against Vladimir Putin was noted by the Home Secretary to confirm what successive governments had always known.  It resulted in a lot of statements of outrage.  No more.