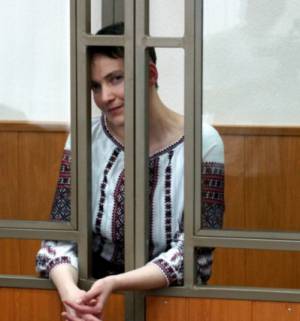 Nadiya Savchenko has recognized the driver of the car in which she was taken against her will into Russia as Pavel Karpov, a Russian who allegedly represented the Kremlin’s interests in the self-proclaimed ‘Luhansk people’s republic’ [‘LNR’].

Karpov was once the ‘right hand’ of Nikita Ivanov, a high-ranking official within President Vladimir Putin’s Administration and was himself in charge of dealings with right-wing movements.  According to Novaya Gazeta, Karpov had before that been the right hand for Alexander Dugin, the Russian fascist ideologue who has played a major role in the military conflict in Donbas.  Karpov arrived in Donbas together with Muscovite Alexander Borodai.  While Borodai remained in the Donetsk oblast, calling himself the ‘prime minister’ of the self-proclaimed ‘Donetsk people’s republic’, Karpov moved to the Luhansk oblast and was active in the creation of ‘LNR’.  He worked closely with the then leader Valery Bolotov and was reported to be part of the team overseen by Putin’s aide Vladislav Surkov.   Karpov is now a political consultant and part of Borodai’s team in Moscow.  Borodai and Igor Girkin were removed from Donbas soon after a Russian Buk missile downed the MH17 Malaysian airliner over militant-controlled territory in July 2014  and Karpov left Ukraine, together with Borodai.

Karpov’s name was heard in the trials of Ilya Goryachev and other members of the neo-Nazi organization BORN [Militant Organization of Russian Nationalists], responsible for at least 10 killings, including that of human rights lawyer Stanislav Markelov.  The trial of Goryachev which resulted in a life sentence highlighted longstanding links between Russian ultranationalists, the Kremlin-backed war in Donbas and the Kremlin.  These were brushed aside by Putin’s press secretary Dmitry Peskov and none of the figures persistently mentioned as important witnesses were summoned for questioning.

During questioning on Monday, Nadiya Savchenko described the events of June 23, 2014.   Russia’s Investigative Committee first claimed that Savchenko had escaped from the Kremlin-backed militants that day, but then later changed this.  Igor Plotnitsky and his fighters are now supposed to have released her, after which she ‘illegally crossed into Russia’. 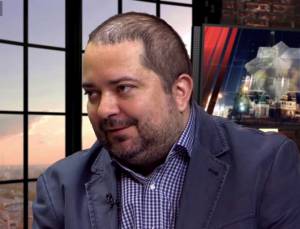 Karpov during an interview in 2015

Savchenko has been more consistent in relating how she was taken by force across the border into the Voronezh oblast in Russia.  On Monday, she explained that before being forced into the car, she had seen Plotnitsky go up to the driver and hand him a file and her mobile telephone.

She described the driver as thickset, bearded and “with a fat face”.  She said that he had a bulletproof vest on and camouflage gear, and had a machine gun.  He had been one of the men who came in to where prisoners were held.

Savchenko’s lawyer Ilya Novikov showed her a photo of a man in a jacket which she confirmed to be that of the man who drove the car.

In court, Novikov also presented a transcript which appears to be between Bolotov and Karpov.  The conversation was intercepted by the SBU or Ukrainian Security Service.

In it Karpov asks Bolotov what the nationality is of the “sniper” that they captured that day  - “he’s just interested”, he says.

Not he alone, it appears.  Both men talk about ‘Babushka’ [normally Grandmother, but Novikov believes they were referring to Russia’s FSB] who had already rung Bolotov and shown interest in the woman pilot who is clearly Savchenko.

Novikov says that he knows that the person calling was Karpov from the phone number.

Since the ‘trial’ of Nadiya Savchenko began in September 2015, the court under presiding judge Leonid Stepanenko has consistently rejected almost all applications from the defence, while allowing highly dubious requests such as that from Plotnitsky to give testimony totally in secret.  The defence was pleasantly surprised at first on Monday by the number of applications allowed, with this probably due to a much larger number of representatives of international bodies and foreign journalists present than usual.   That, however, ended when the defence asked for Bolotov and Karpov to be summoned for questioning.  The court allowed Karpov’s photograph to be added to the case file but turned down the request for their interrogation, claiming there to be no justification.  It also refused to add the part of the application with the absolutely critical transcript above, this time using the fact that some of the material was in Ukrainian as pretext.

The court has also refused to add material to the case which proves Savchenko’s alibi.

Nadiya Savchenko is charged with complicity in the death of two Russian journalists who were killed in mortar fire on June 17, 2014.   There is no evidence at all that Igor Kornelyuk and Anton Voloshin were deliberately targeted and they were in an area of heavy fighting, without even bulletproof vests.

Last week the defence questioned Andriy Ivanov, from MTC Ukraine who in 2014 installed and serviced the mobile communication towers in the Luhansk oblast.  Ivanov came vital testimony regarding Savchenko’s location when she made a call at 10.44 on June 17, 2014.  This confirms Savchenko’s alibi.

The court heard it, but refused to add the testimony to the case, claiming that this was because the evidence had been gathered on Ukrainian territory – the territory on which Savchenko was taken captive by Kremlin-backed militants before being abducted to Russia.  On Monday, the court also refused to add the letter received from the Lawyers’ Chamber of Moscow confirming that there are no geographical restrictions on where material can be obtained.

Nadiya Savchenko has been recognized by the Memorial Human Rights Centre as a political prisoner.  She is also a Ukrainian MP and delegate to the Parliamentary Assembly of the Council of Europe.  Her release and that of others whom Russia is holding illegally has been demanded by all democratic countries and international structures.  The Minsk Agreement also obliges all parties, including Russia, to release all persons illegally held.