French filmmaker adopts Putin’s ’Ukrainian fascist hordes’ line for Canal Plus"US guilty of genocide": Kremlin supports anti-Maidan festival with links to the German far rightOdesa 2 May Suspect: We were financed by MoscowVital Probe of Odesa May 2 Tragedy stymied because of questions answered?Movement at last on Odesa 2 May investigationRussia Today, or why Odesa May 2 is different from BaltimoreOdesa May 2 Investigation: A Failed Test for Ukrainian JusticeMore Evidence against Incendiary Lies about Odesa 2 MayContinuing Obstruction of Odessa May 2 InvestigationPropaganda that KillsOdessa May 2 trial turns into farce as Russia continues ‘massacre’ propagandaBad Start to Crucial Odessa May 2 TrialsRussia’s New Odessa FileOdesa "Massacre" Propaganda vs. the FactsDangerous silence over police role in Odessa May 2 eventsWithout Double StandardsWhat Russian TV won’t show about the events in OdessaCVU: Pro-Russian activists sold information about pro-Ukrainian activists in OdessaUHHRU condemns police role in Odessa tragedyRussia plans special propaganda ‘lesson’ explaining to children in occupied Ukraine why the bombing of their cities is ‘liberation’
• Topics / Freedom of expression 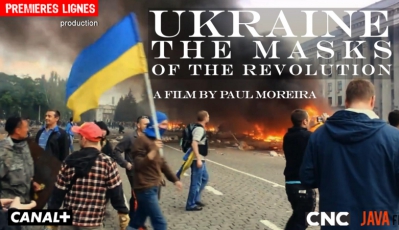 This is a personal opinion post published ahead of the screening of “Les Masques de la Révolution”, on French Canal +, on 01/02/2016

A few words on “Les Masques de la Révolution – The Masks of the Revolution”, by Paul Moreira, to be shown on French TV on Monday, 1st February.  The scandal has been brewing in France for the past week as I and a few people – press correspondents, researchers, activists, diplomats – got a hand on it. As we watched and discovered the 52-minute piece, we had to face a compilation of factual mistakes, exaggerations and misleading set-ups. Since then, those have been denounced extensively as a few samples show below:

To which Moreira responded here:

Follow both an endless debate and a game of naming and shaming and guessing who told the truth before anyone else and who is paid by who. And so on, and so forth. I refuse to enter such a game and I want here to salute Anna Colin Lebedev and Ioulia Shoukan who managed to raise the standards of the debate by asking real questions in their latest posts. No, there is no sense in asking for the screening of the documentary to be cancelled. Yes, the theses it underlines deserve consideration and pedagogy. A proper investigation into the Odessa tragedy is essential – so is a solid investigation on the Maïdan deaths, still unresolved. And yes, a debate on the new faces and actions of nationalism in Ukraine is essential to understand and analyse.

What I want to stress here is that I feel insulted as a French journalist. I have been living in Ukraine since 2011 and I have tried to understand the complexity of this country and of the region – and the challenges it faces. What we may see in Moreira’s piece is nothing new. Given the current context of a war of information, if not a “war ON information”, one may have seen such distortion of facts before. What is new is that it comes from a French journalist with an impressive record of brilliant investigations. He is to screen what he dubs “an investigation” in an investigative show – “Premières Lignes”, which is usually credited with a reputation of credibility and solid findings – on one of France’s major TV channels. His report will be viewed by millions – just because of his reputation.

This comes as a shock for me – a young French journalist who claims to represent and implement some standards of objective journalism. Western modern journalism, as we were taught. Hell, I even give lectures on that in Kyiv!

The most recent posts on the scandal were directed to the audience we, foreign correspondents, work FOR – our readership and viewership – to explain the fallacies of “The Masks of the Revolution”. Let me address the people we work WITH. Ukrainians, Russians, Donbass residents, DNR & LNR representatives, Crimean Tatars, nationalists, civic activists, drug users, HIV-AIDS patients, etc. People who trusted me with information and stories – first and foremost because of what I represented as a French journalist. After the movie screens tonight, I would understand if many of them would feel suspicious to see me coming in. I already know I will have to defend myself and my work. I will have to emphasise that I do not work like « this documentary you have seen on Canal + ».

And I don’t. I don’t pretend to have seen the flags of the Azov battalion over Maïdan – despite the fact that the battalion was created over two months after the end of the Revolution. I do not evoke the “Crimean referendum to join Russia” without mentioning the other component of the story, that is to say Russian troops deployed in Crimea ahead of the vote. I never come up with a theory, which would make the Ukrainian-Russian language issue as a symptom of an irreconcilable internal division. Provided I would, I would not pretend to ignore that many of the fiercest Ukrainian nationalists – Andriy Biletski first and foremost – are mainly Russian-speakers. When I need to ask questions on security and the impact of armed battalions in Ukraine, I do not go to the Minister of Economics to obtain answers. Those – and many more fallacies – literally glut Moreira’s report.

I live in Ukraine long enough to understand that here, as anywhere else, nothing and no one is all black or all white. The President, the government, the Parliament, Maïdan revolutionaries, Ukrainian nationalists, Donbass separatists, oligarchs, corrupt civil servants… No one is black or white. Nothing is that simple. I know it because I care enough to try to understand it. It’s exhausting. Yet I want to keep caring and be accountable for it. And I seriously hope I will keep enjoying people’s trust to do so. Trust is the most precious thing we have, as foreign correspondents. It cannot all go to dust, just because of a one journalist who decided to throw it all away.