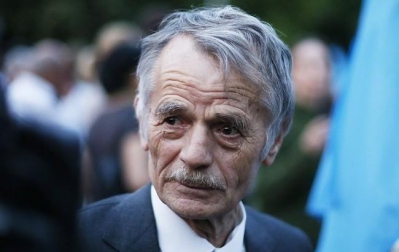 Men claiming to be from the Russian Migration Service have appeared at the home near Feodosiya of Mustafa Dzhemiliev’s daughter and tried to take her son Erol Abdulzhelilov away.

They left, however one of the cars soon returned.  A man who identified himself as police captain Ali Fazilov said that they needed to take Erol to the police station for “a talk”.  The second person refused to identify himself, the relatives told the Crimean Human Rights Group.

Erol and his family refused to go anyway without a formal summons and explanation.  The men were finally forced to leave but have threatened to “invite” Erol again.

This new move comes less than 2 weeks after an arrest warrant was issued in Russian-occupied Crimea against Mustafa Dzhemiliev.  Almost 2 years after Russia annexed Crimea and exiled the world-renowned Crimean Tatar leader and laureate of numerous international awards, the same ‘authorities’ decided to prosecute him for trying to enter his homeland.   They even placed Mustafa Dzhemiliev on the federal wanted list.

The following is unfortunately not a joke.   Mustafa Dzhemiliev is accused of having on May 3, 2014 tried to cross into Crimea from mainland Ukraine at the Armyansk border crossing.   The charge reads:

In short, he crossed the border into his own homeland which Russia, in violation of Ukrainian and international law had invaded and annexed a few months earlier.

Mustafa Dzhemiliev is also charged with possession of a weapon and ammunition (found locked up in a safe), as well, seemingly, as careless possession.

The charge pertaining to May 3, 2014 is of particular cynicism not only because Mustafa Dzhemiliev has gained world fame and respect for his lifelong commitment to peaceful struggle for the rights of the Crimean Tatar people, including their right to return to their homeland.  He spent 15 years in Soviet labour camp for his convictions, and two months after Russia’s invasion, was again exiled.

The whole situation with the ban, presented on a scrappy piece of paper, however, was also dishonest.  On that occasion, and two months later when the Head of the Mejlis of the Crimean Tatar People Refat Chubarov was also informed of a 5-year ban, important details enabling the ban to be challenged in court were missing.  With Dzhemiliev’s ban, there had been public pronouncements from people in Moscow, denying that any such move had been taken.

Following its enforcement on May 2, 2014, the Mejlis called on Crimean Tatars to come to the Armyansk crossing to meet Mustafa Dzhemiliev and escort him into Crimea, .  They were confronted by Russian OMON riot police and Crimean ‘police’, including, apparently, ‘Berkut’ special units.

It was decided that Dzhemiliev would return to Kyiv in order to avert bloodshed.  The only actual ‘offences’ reported at the time were that roads were blocked. Dzhemiliev has since noted that attempts by the Crimean prosecutor to charge people with illegally crossing the border fly in the face of international law, as well as Ukrainian, since the crossing is an administrative border between parts of Ukraine.

Around 200 people were later fined on administrative charges (an ‘unauthorized rally’ and ‘not obeying the police’).   The arrests began six months later over supposed violence against police officers – none of which had been reported at the time (more details here).

There have also been reports on Tuesday of mass searches being carried out of Crimean Tatar homes in the Dzhankoy district of Crimea.  No further information is currently available, however it is clear that the Russian occupation authorities are specifically targeting Crimean Tatars.