Open Letter: It is Not Minister Abromavichus Who Has to Resign 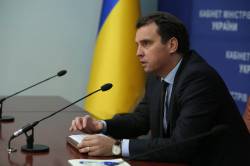 Today’s statement by the Minister for Economic Development and Trade can trigger a political crisis with unpredictable outcomes. It reduces trust in all branches of power. A consequence of this crisis can be the loss of actual legitimacy by the President, which will put on hold the reform efforts, corruption fighting, eliminate any opportunity for the constitutional reform and Minsk-2 format, and simplify the task for the Russian government to destroy the Ukrainian state.

We respect the openness of Minister Abromavichus and his courage to express publicly what has been voiced already by many Ukrainian citizens – that some high-level Ukrainian officials still think that they can continue to redistribute cash flows to the state for their own good.

The country is at a critical point and the responsibility of the legitimately elected political leadership is to stabilize the situation. The President’s refusal to provide clear answers to unprecedented accusations of turning a blind eye to corruption made by key reformist ministers will deepen the looming political crisis, which creates a threat to country’s national security.

There shall be no more room for corruption in Ukraine! In response to the Minister’s accusations, there should be a transparent and impartial investigation of all claims made in his statement.

Maidan-2014 was the direct result of irresponsible political behavior in 2005. The consequences of the same irresponsible behavior today can be not only the “Third Maidan” but the extinction of the Ukrainian state.

We believe that to stabilize the situation and to stop the rapidly deepening political crisis, several steps need to be taken:

An Immediate public reaction of the President to the Minister’s statement. The President should assume the responsibility for solving this crisis. The society has the right to know the leader’s position on these accusations;

An Immediate temporary suspension by the President of his subordinates mentioned in the statement from their positions, while requesting the Specialized Anti-Corruption Prosecution Office and National Anti-Corruption Bureau to investigate the facts mentioned by the Minister;

All persons mentioned in the Minister’s statement who are not directly subordinate to the President, should be suspended from their job in the government until the investigation is completed;

There should be an independent investigation concerning all personalities and facts mentioned in the Minister’s statement; the progress and results of this investigation should be made public;

Upon results of the investigation, an independent court should make a decision according to current legislation.