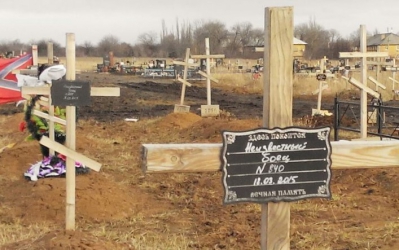 There are hundreds of unmarked graves in Donetsk cemeteries, most of them belonging to the Russian nationals killed in a war Russia unleashed and continues to deny any involvement in

In June 2014, while Russia was continuing to deny any involvement at all in the conflict in Donbas, a grotesque spectacle was carried out for the Russian media with 31 coffins, supposedly of ‘volunteers’, returned to Russia.

In February 2016, IV Vlast has posted harrowing photos of hundreds of unmarked graves in a Donetsk cemetery.  Militant fighters are buried in various Donetsk cemeteries, but the largest grave site is near Mine No. 6 ‘Kapitalna’.  This has increased massively over the last 2 years for obvious reasons.

The large number of unidentified graves is linked with the fact that no DNA examinations are being carried out in Donetsk.  The journalists do, however, also point out that most of the unnamed graves are likely to be those of Russian nationals.  There were certainly some local people who joined the fighters – some genuinely supporting them, others when most factories, mines, etc. stopped functioning and people had no work.  It seems unlikely that many of these would have died without anybody trying to find them and enabling their identification.

More about the fighters who lie in these unnamed graves depends on which version you hear. 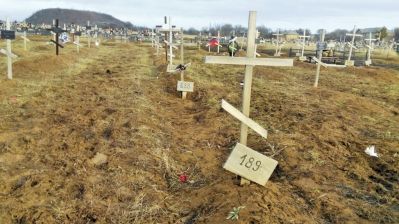 Russia has consistently denied any military involvement in Ukraine.  It has even claimed that the two military intelligence officers captured in the Luhansk oblast in May 2015 and now on trial in Kyiv had left the Russian military six months earlier.  This was long denied by the two men – Yevgeny Yerofeyev and Aleksandr Aleksandrov who confirmed in private conversations with members of the OSCE, Sergei Krivenko from the Russian Human Rights Council, a Novaya Gazeta journalist and many others that they were active GRU officers.  They changed their story only months later.

Western reports – including Russian Forces in Ukraine by Igor Sutyagin – have suggested as many as 10 thousand Russian military personnel involved in the conflict, with the arms, military equipment etc. also brought in from Russia.  The Buk missile used to down MH17 over militant-held territory came from Russia.

The Russian military prosecutor has also refused to investigate a sharp increase in the number of unexplained Russian soldiers’ deaths which coincides with the worst fighting in 2014.

Some of the deaths, like those of almost an entire paratrooper unit from Pskov were reported from late August 2014.  These were also officially denied.  There were also unofficial methods, including pressure on relatives who on one occasion even denied that a person had died, attacks, criminal proceedings or other punitive measures against those, like Lev Shlosberg, Ludmila Bogatenkova and Svetlana Davydova, who revealed and / or probed Russian military involvement in Ukraine.

Thus far Russian President Vladimir Putin’s May 2015 decree classifying as secret all Russian losses in something referred to as ‘special operations’ has not silenced all journalists, but it has probably deterred some.  There are still reports in some independent publications about soldiers jailed effectively for refusing to fight in Ukraine and other rights activists’ attempts to find out how soldiers died.

In fact, the involvement of fighters from Russia could never really be denied.  They were all, however, presented as ‘volunteers’ who, in Putin’s words, were driven “by a call of the heart”.

Nobody has explained why Russians can listen to this alleged “call of the heart”, but two Ukrainians – Stanislav Klykh and Mykola Karpyuk –  are on trial in Russia, accused of fighting as volunteers in Chechnya in 1994/95.   The provable fact that neither man had ever set foot in Chechnya has not stopped Russia from holding them in detention for almost 2 years.

What is, of course, never mentioned in the Russian and Kremlin-backed militant media is that a very large number of Russian nationals were or are in Ukraine as mercenaries.

In a recent Gazeta.ru article, men who had fought in Donbas and returned alive, some crippled, claimed motives similar to those asserted by Putin.

This is the line also taken by the Russian nationals who took part in razing the village of Kozhevnya to the ground in July 2014.  Alexander Zakharchenko, now leader of the so-called ‘Donetsk people’s republic’ recently admitted to this war crime, claiming that it had been necessary to save their lives and the lives “of our people”.

There have been numerous reports naming the amounts of money offered for fighting in Donbas.  The figures were generally large for anybody, and it is known that a significant number of fighters are from Russian republics like Dagestan where the standard of living is very low and unemployment high.

The contract soldiers who refused to go to Donbas were probably offered a smaller amount – 8 thousand roubles a day.

A ‘Union of Donbas Volunteers’ was recently formed in Moscow, headed by Alexander Borodai who, together with former Russian military intelligence officer Igor Girkin, was most active in the first months of the military conflict.  Among the demands put by the members of this union is for some kind of official status.

Sergei Krivenko, from the Russian Human Rights Council and one of the activists probing Russian soldiers’ deaths in Ukraine, dismisses such claims.  Russian nationals, he says, should not be given ‘status’, but tried for their part in military action on the territory of another country.  There is an article in Russia’s Criminal Code on acting as a mercenary, and he is blunt in calling such people criminals.

There is no such status, official or otherwise, as “participant in military action”.  Krivenko does, however, believe it possible that the Russian state will come up with some form of support.  There are, after all precedents, with the Soviet regime having just as illicitly fought in Ethiopia, Angola, etc.

That, however, is for the living.  The dead, and there are many, lie in unmarked graves in Donbas.