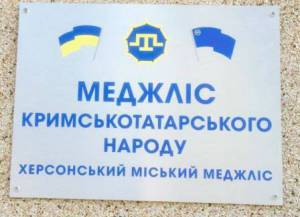 Local Crimean Tatar leaders believe that the grenade attack on Sunday morning is part of a general campaign by pro-Russian forces aimed at fermenting trouble in the region and points to similarities with events on the eve of Russia’s annexation of neighbouring Crimea.

The explosion between 2 and 3 a.m. on Sunday morning in the offices of the Crimean Tatar Mejlis, or representative body, in Kherson was probably caused by a grenade.  It blew out the door to the basement but thankfully nobody was injured. 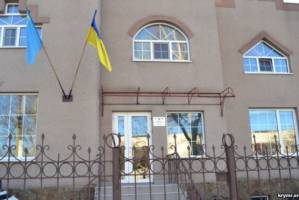 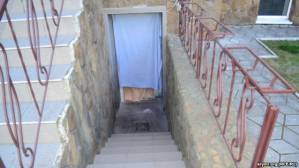 Ibrahim Suleymanov, Head of the Kherson Mejlis, calls the attack an attempt by pro-Russian forces to destabilize the situation in the region and intimidate Crimean Tatars.  The Kherson oblast borders on Crimea, and there have been many worrying developments, especially since the Crimea Blockade began on September 20 last year.

Suleymanov draws ominous links with methods used by the Russian security service in Crimea before Russia’s annexation of the peninsula.  He points to action then by the FSB aimed at inciting inter-ethnic enmity and frightening the local Crimean Tatar population.

The explosion comes just days after a meeting of representatives of different minorities in Kherson was held in the Mejlis office.  The meeting resulted in a joint letter of protest over inflammatory articles by Kherson journalists.  In it they asked the regional administration, the SBU [Ukrainian Security Service] and Ukrainian Journalists Union to react to such publications.  Suleymanov says that they suspect that Sunday’s terrorist act was in retaliation for that appeal.

It was Crimean Tatar leaders Mustafa Dzhemiliev and the Head of the Mejlis Refat Chubarov who first announced a civic blockade of Crimea.  They initially put very specific rights-related demands for ending the blockade of trucks with goods to Crimea.  These included the release of Crimean Tatar leader Akhtem Chiygoz, Oleg Sentsov, Oleksandr Kolchenko and all Crimean and other Ukrainian political prisoners held by Russia and an end to other forms of persecution by the Russian occupiers.

The situation has developed considerably since then and Russian President Vladimir Putin has now effectively doomed Crimea to be long without sufficient electricity and probably water for which the peninsula is dependent on Ukraine (see Putin’s Crimean Genocide).

Instead of meeting legitimate human rights demands, reiterated in a European Parliament resolution on the human rights situation in Crimea, in particular of the Crimean Tatars,   Russia has stepped up repressive measures, including armed searches, interrogations and arrests, not to mention the grotesque ‘arrest warrants’ on both Mustafa Dzhemiliev and Refat Chubarov.

As mentioned, there has been a surge of articles and posts in pro-Kremlin media and social networks which seem clearly aimed at stirring up inter-ethnic strife in the region.

There have also been other suspicious developments.  There was recently a startlingly well-organized demonstration in Kalanchak, near one of the border crossings between mainland Ukraine and Crimea.  The protesters demanded action from the Ukrainian authorities over criminal activities by men wearing balaclava camouflage gear with emblems from the Aidar Battalion.  The demonstrators accused these men of abducting people, armed robbery, theft and general intimidation, and link the increase in crimes with the beginning of the Crimea Blockade (more details here).

Not only was the demonstration extremely well-organized, but it prompted a speedy response from Igor Plotnitsky, leader of the so-called ‘Luhansk people’s republic’.  In his ominous ‘Appeal to Kherson oblast residents’, the Kremlin-installed militant leader claims that the events in the Kherson oblast are reminiscent of his version of events in Donbas in Spring 2014.  He hails the “future Kherson people’s republic”, and promises that if asked, they “will definitely work out how to help you”.

The Russian media has gone even further, eagerly reporting any protests, etc. in the Kherson oblast and often embellishing their story with anti-Crimean Tatar elements.