Only Torture Rules In Russia’s Trial of Klykh & KarpyukTorture, drugs & forced psychiatric treatment: Soviet-style abuse of Russia’s Ukrainian prisonersTortured for the Wrong Confessions: Russia’s ‘Ukrainian Nationalist’ Charges DemolishedMemorial exposes Russia’s cynical con in trial of ‘Ukrainian nationalists’Ukraine’s leaders can prove Russia’s Karpyuk - Klykh trial is farce - why don’t they?Russia’s ’Ukrainian Nationalist’ Show Trial: No Bodies, No Proof, but Good ’Confessions’Tourists Beware: Putin’s KGB-Kafkaesque Justice is for Foreigners Too24-year sentence in Russia’s ‘Ukrainian Chechnya fighter’ show trialThe Chilling side to Russia’s claims about Yatsenyuk as Chechnya fighterIn Putin’s next show trial, Ukrainians are cast as Chechnya separatist fightersWhere being Ukrainian is as good as being guiltyMoscow shouts ‘abduction’ yet holds Ukrainian hostages incommunicadoRussia holds 72-year-old Ukrainian hostage on absurd spying chargesRussian mother of 7 stands by her warning about Russian soldiers in UkraineRussian Mother of 7 accused of ‘treason’ released from custodyRussians call to release mother of 7 accused of revealing ’state secrets’Russian woman charged with ‘treason’ for reporting soldiers sent to UkraineRussian Newspeak: “Killed at exercises on the border with Ukraine”Russian soldiers’ deaths in Ukraine: A web of lies and fake social network pagesMore Russians aware that their sons are being sent to fight and die in Ukraine
• Topics / News from the CIS countries

Russia to try Ukrainians tortured for surreal confessions in their absence 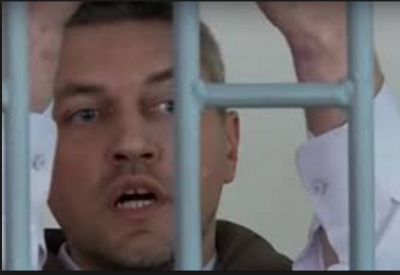 The trial of two Ukrainians whom Russia has accused of crimes which never took place seems set to continue without either defendant after Stanislav Klykh was removed from the court on Monday, Feb 8.  The men’s defender and Nadiya Savchenko’s sister, Vera, has already been removed for alleged ‘contempt of court’.  All that now remains is for the presiding judge to accuse the men’s lawyers of similar ‘contempt’, and the court will be free to ignore the men’s irrefutable alibis, the historical inaccuracies in the charges against the men, as well as the huge weight of evidence that both were subjected to torture.

Klykh and Karpyuk are among the “Ukrainians unjustly held in Russia and Russian-occupied Crimea” whose release was demanded last week by the US mission to the OSCE and is required by the Minsk Agreement.

The trial had been suspended on Jan 19, with the Supreme Court in Chechnya ordering that Klykh undergo a psychiatric assessment after his behaviour gave serious grounds for concern.   The Memorial Human Rights Centre, whose assessment of the charges and the trial itself has been damning, reported that at the first hearing scheduled after the New Year break on Jan 13, Klykh behaved very strangely.  “He shouted, stamped his feet, uttered incomprehensible and senseless phrases, shook the bars, knocked on them, and so forth.”  He could not be calmed down, and in the end an ambulance was called.   This was not the first sign of extremely disturbed behaviour.

Klykh has been in Russian detention since August 2014.  For the first 11 months, he was held totally incommunicado.  As soon as his lawyer, Marina Dubrovina, was taken on in July 2015, Klykh retracted all grotesque confessions and stated clearly and in detail what kind of torture had been used during the first two months to extract this ‘testimony’.

In his application to the European Court of Human Rights, he speaks of electric shocks, being asphyxiated, deprived of sleep and food, and also mentions that they filled him with large amounts of alcohol and psychotropic substances.  Karpyuk’s testimony for the Court in Strasbourg is similar, although drugs and alcohol are not mentioned.

Dubrovina had immense difficulty extracting any medical records about her client, but has tracked down enough to effectively confirm the torture, which Klykh still bears the scars from.  She is convinced that his disturbed state is linked with unlawful methods used by the investigators to beat out confessions, as well as ill-treatment from cellmates.

Psychiatrists provided by the State, however, concluded that Klykh was fit to stand trial.  According to a Kommersant report, he was even threatened with additional charges of ‘contempt of court’ because of his behaviour.

During the hearing on Monday, Klykh asked several questions of the person giving testimony which appeared aimed at finding out their political views.  Given the nature of this case, they were not irrelevant, but were rejected by the court.  Klykh then complained that pressure was being put on the jury, which is also a real possibility and not indication of paranoia.  He is reported to have ignored the judge’s remarks, and continued to walk around the cage he’s in shouting that he had never been in Chechnya.

This is demonstrably true, however the judge simply decided to have Klykh removed for ‘infringements of regulations’.  Klykh responded by saying “Thank God!”

Russia claims that Stanislav Klykh and Mykola Karpyuk took part in fighting in Chechnya 20 years ago and that during battles in Dec 1994 and Jan 1995 they killed a number of Russian soldiers.   The case provoked a stream of humorous Internet posts back in September 2015 after Alexander Bastrykin, head of Russia’s Investigative Committee, publicly asserted that the men had fought together with current Ukrainian Prime Minister Arseny Yatsenyuk and other prominent Ukrainians.  All were alleged to have committed terrible atrocities. The Photoshop images of Yatsenyuk as a Chechen fighter were often funny, but ignored the chilling fact that Bastrykin was basing his allegations on ‘confessions’ tortured out of Klykh and Karpyuk who had been held incommunicado and without proper lawyers throughout the so-called ‘investigation’.  .

Roman Oleksandruk, lawyer representing the two men’s interests from Ukraine, explained at a press conference on Feb 5 that Ukraine has sent documents to the Russian Investigative Committee.  These include documentary proof, as well as witness testimony, confirming that both men were in Ukraine at the time of the alleged offences.  As reported earlier, Karpyuk was known to have been looking after his dying mother, while Klykh was taking exams at university.

At  this point, of course, the trial should be stopped and the two men, held illegally in Russia for almost 2 years, returned home.  Unfortunately, Russia has already ignored Nadiya Savchenko’s unbreakable alibi for over 18 months, so optimism is difficult.  In Savchenko’s case, the court has simply refused to add vital material from Ukraine to the court material.

It seems worryingly likely that the ‘investigators’ seriously believed that ‘confessions’ were sufficient to obtain the required convictions and long sentences for two supposed Ukrainian ‘nationalists’.  They certainly failed to do even the most basic homework.

Of the 30 Russian soldiers whom Russia is claiming Karpyuk and Klykh killed, 18 died in another place altogether, and a further eleven were not killed by gunfire, as the prosecution claims.  These are just some of a whole series of fundamental inaccuracies pointed out by the authoritative Memorial Human Rights Centre.  Memorial has also accused the Russian investigators of cynical manipulation of the jury.  It notes that the two men have not been charged with horrific acts of torture and murder despite the fact that both men ‘confessed’ to these.  The confessions have, nonetheless, been included in the indictment.  Memorial is convinced that this is precisely so that they can be read out and influence the jury, while not being charges which the defence can disprove.  The human rights organization believes that the atrocities never took place, and adds this to the already considerable grounds for assuming that both Klykh and Karpyuk gave testimony under torture.

Karpyuk has been held in Russian captivity since March 2014 and only received access to a lawyer on the eve of the trial in September 2015.  Klykh was, as mentioned, held for 11 months before receiving a proper lawyer.  Both men have retracted all testimony and described in detail the torture they were subjected to, including in applications to the European Court of Human Rights.

The fact that both men confessed to horrific crimes that never took place will surely be assessed correctly by the Court in Strasbourg, but there is also other evidence.  Although the Russian forensic examinations have denied any evidence of the alleged torture, the men have noticeable scars on their bodies which were not recorded as present when they were first taken into custody.

In Klykh’s case, lawyers have unearthed medical records from 2014 confirming his torture allegations.

Russia has refused to investigate the allegations of torture which is in itself a violation of the European Convention.  Simple denial is scarcely enough when men have ‘confessed’ to heinous crimes in a part of the Russian Federation that neither had set foot in and retracted all evidence as soon as they received access to lawyers.