French filmmaker adopts Putin’s ’Ukrainian fascist hordes’ line for Canal Plus"US guilty of genocide": Kremlin supports anti-Maidan festival with links to the German far rightOdesa 2 May Suspect: We were financed by MoscowVital Probe of Odesa May 2 Tragedy stymied because of questions answered?Movement at last on Odesa 2 May investigationRussia Today, or why Odesa May 2 is different from BaltimoreOdesa May 2 Investigation: A Failed Test for Ukrainian JusticeMore Evidence against Incendiary Lies about Odesa 2 MayContinuing Obstruction of Odessa May 2 InvestigationPropaganda that KillsOdessa May 2 trial turns into farce as Russia continues ‘massacre’ propagandaBad Start to Crucial Odessa May 2 TrialsRussia’s New Odessa FileOdesa "Massacre" Propaganda vs. the FactsDangerous silence over police role in Odessa May 2 eventsWithout Double StandardsWhat Russian TV won’t show about the events in OdessaCVU: Pro-Russian activists sold information about pro-Ukrainian activists in OdessaUHHRU condemns police role in Odessa tragedyFrench court orders journalist to retract the truth about grossly misleading Moreira film on Ukraine
• Topics / Politics and human rights
• Topics / Freedom of expression 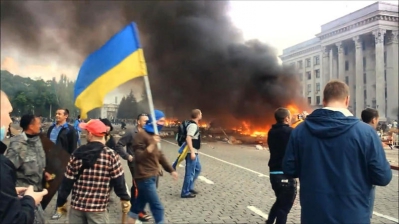 If Russian involvement in the making of French filmmaker Paul Moreira’s “Masks of the Revolution’ remains in question, there can be no doubt about the Russian propaganda drive now underway.  The undisputed coup comes in the ‘human rights award’ to the creators of this film about Euromaidan and other events in Ukraine over the last two years “for courage and professionalism”.

It was specifically the lack of professionalism in Moreira’s film that prompted Sébastien Gobert, a French journalist working in Ukraine, to slate the “compilation of factual mistakes, exaggerations and misleading set-ups” and write that he felt insulted as a French journalist.  He joined with 17 other French journalists in writing an open letter to Moreira criticizing the manipulation of facts, downright inaccuracies and unverified information in the film.  They cite a number of specific examples where the viewer was misled, such as the use of video footage of a neo-Nazi march presented in the film as from Euromaidan.  The film’s very slant is deceptive, aimed as it is at presenting Euromaidan as the work of paramilitary right-wing extremists.

Concern over the misleading nature of the film was expressed in articles in various French media, such as Le Monde, and in an open letter posted on Le Monde, from philosophers, journalists and one former ambassador to Ukraine, which called the Canal + film seeped in Kremlin propaganda against Ukraine.  Even Charlie Hebdo called Moreira the latest « useful idiot made in France » after Gerard Depardieu, Nadine Morano and Thierry Mariani.

None of this is noticed by Russian and pro-Russian media.  Sputnik Intl, for example, quotes *only “European Parliament Member Jean-Luc Schaffhauser” who believes that people are beginning “to see the true nature of the illegal formations supporting the regime in Kiev, and the nature of the coup orchestrated by the United States”.  He suggests the film could change France’s “anti-Russia stance”.  Schaffhauser is a right-wing politician linked with Marine Le Pen’s coalition, who was one of the ‘observers’ brought in to approve the so-called ‘referendum’ on May 11, 2015 in Donbas.  He was also involved in negotiating a large Russian loan for Le Pen who has been unfailing in her support for the Kremlin and criticism of sanctions against Russia.

Criticism, according to Sputnik, has only been expressed by Ukraine’s government, which “urged the French broadcaster to take the documentary off air. The film’s creator Moreira called it "denial, bordering on hysteria."

Better, undoubtedly, to quote “human rights activists”, and this the Russian media is now able to do.  On Feb 5, RIA Novosti cited Alexander Brod, head of the Moscow Bureau for Human Rights as saying that his organization and the Yalta club had decided to provide their award “for courage and professionalism" to the film ‘Masks of the Revolution’ because this film tells the bitter truth about what happened in Ukraine two years ago, and destroys anti-Russian propaganda stereotypes of the West, and encourages Russian-European relations to start on a clean slate”.

Brod broke with other human rights activists in Russia, including many who are, like him, on the President’s Human Rights Council, in March 2014 over his reaction to events in Ukraine.  He called the change in regime in Ukraine connected with Euromaidan as a “state coup by the opposition, radicals, neo-Nazis and criminals” and claimed that Russians were at threat of ‘genocide’ in Ukraine.

It is worth noting that Moreira’s film was criticized by the French journalists, among other things, for its primitive over-simplification of Russian-Ukrainian relations, language issues and stereotypes based on a binary ‘east-west’ divide.

It remains unclear what Moreira’s motives were, but the film he produced is profoundly and dangerously dishonest and one-sided, with viewers not given an opportunity to understand how Euromaidan came about, and why it was supported by people from all backgrounds, faiths and national minorities.

The presentation of Russia’s annexation of Crimea and of the Blockade is quite simply taken from the worst pro-Kremlin propaganda.  The overwhelming majority of Crimeans are said to have voted to join Russia.  If this were the case, Russia would not have had to send known pro-Kremlin ‘observers’ from neo-Nazi, far-right and neo-Stalinist political parties to give a stamp of approval.  Nor would the Human Rights Council have come up with entirely different results.

Most western viewers are at least aware of the gunning down of unarmed protesters on Maidan and the reason why Ukrainians came out in protest.  Their attitude to Crimea and continued sanctions is probably also unlikely to be altered by Moreira’s film.  The lies about the events in Odesa on May 2, 2014 in which 48 people lost their lives are toxic precisely because most people will not have any way of understanding how badly they are being deceived.

It is difficult to believe that Moreira acted in good faith.  He was aware of the 2 May Group which has subjected the events to exhaustive examination and even interviewed one member, Tatyana Gerasimova.  She was startled by the irrelevance of his questions and failure to ask about crucial findings, but says that she naively assumed that a French filmmaker producing a film for Canal + would wish to provide a truthful film.  She and other members of the Group are appalled by the lies they found.

It was clear by December 2015 that Moreira, for whatever reason, had ignored the findings of the 2 May Group (see their film in Russian,  English and in German) and the Council of Europe’s International Advisory Panel.  He was instead pushing the Russian propaganda narrative about an Odesa Massacre.  Like Russian propaganda, he manipulates video footage, and omits crucial information, such as the role of pro-Russian groups in provoking the disturbances and in the first deaths.  The viewer is unlikely to understand that experts have all agreed that there is no way of knowing whether the fire in the Trade Union Building was caused by a Molotov cocktail being thrown into the building by pro-Ukrainian activists or out of the building by the pro-Russian activists inside.  They will not realize that the deaths were caused by the failure of the fire services to appear, that a large number of pro-Ukrainian activists instead worked to save lives when they realized that people were trapped in the building and that this was a tragedy, but no massacre..

The only bitter truth that Moreira’s film and its ‘Russian human rights award’ have demonstrated is that those with an interest in spreading incendiary lies have no intention of giving up.  Canal + may have seen nothing wrong with showing Moreira’s film, but it has been asked by a French-based NGO Ukraine Active for the right to respond and there can be no justification in refusing.

As well as the links above, please also see:

More Evidence against Incendiary Lies about Odesa 2 May

Odesa ‘Massacre’: Propaganda vs. the Facts

‘Clear Signs of Sabotage’ in Odesa 2 May Investigation

*  The Sputnik address, if the hyperlink does not open:  #ixzz3zbYsktIy