Remember Ilovaisk and don’t trust Putin’s call for safe passage!Russia’s Ilovaisk TreacheryThe Russian Invasion and Deaths Putin didn’t mentionRussian NGO has list of 400 killed or wounded Russian soldiersIf Russia is not at war, then who is in those freshly-dug graves?Macabre Convoy: Cargo 200 from Ukraine to RussiaInvasion by any other nameHalf-empty or half-emptied?Poland knows about Russian ‘humanitarian convoys’. It didn’t let one in.Stand up to Putin: buy Polish apples!No Sanctions Game Changer?Will the West sleep through this final wake-up call?Russian LifeNews inadvertently told the truth about downed Malaysian airlineMilitants accused of deliberately shooting at Severodonetsk residential areaSent to be shotThe EU’s Opaque Dealings with UkraineWhose anti-Semitic and Homophobic Choice?What should they talk about, Mr Putin?The Peace that chokes RussiaEU’s Clear and Consistent Capitulation?
• Topics / Politics and human rights
• Topics / News from the CIS countries 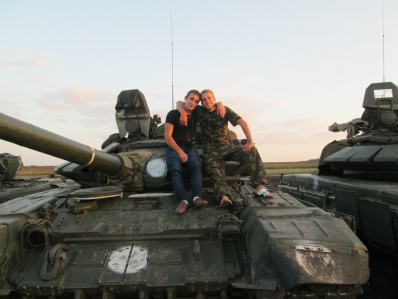 Ruslan Leviev, Russian blogger and head of the Conflict Intelligence Team (CIT), is convinced that the order for the offensive on Debaltseve in Donbas was issued by Russian President Vladimir Putin.

In their report, published in Russian and English, the group provides evidence that Russian Defence Minister Sergei Shoigu personally gave a watch to a Russian soldier being treated in a Moscow hospital for wounds received in the battle.

Russia has persistently denied any military engagement in Donbas.  These denials lack any credibility in the light of numerous reports of soldiers’ deaths, the sharp increase in the number of soldiers’ deaths during the period when Russian involvement was first reported,  the role played by the two military intelligence officers Yevgeny Yerofeyev and Alexander Aleksandrov,  reports from soldiers themselves., not to mention reports from NATO, the USA, Amnesty International, etc., all based on satellite observations.

Further evidence is often provided by soldiers themselves writing on social networks, and this was how CIT came upon Yevgeny Usov from the Sixth Separate Tank Brigade from Russia’s Nizhny Novgorod Oblast  (VK.com profile  Saved copy)

Their search is described in detail in the report.   They uncovered a blurred photograph seemingly of Usov in bed with Shoigu near him.  Another user Ivan Bandarin asks what the minister said, to which Usov replies that he didn’t say much, just that we would get well, and gave him a watch.  The next photo shows a souvenir Aviator Airacobra watch with the Russian Defence Ministry logo on the dial.

CIT believe that Shoigu’s attention indicates that Usov was involved in an important battle.  They therefore tried to establish, using geolocation, etc., when and where the photos were taken.

They explain how they concluded that the battle must have been that for Debaltseve “which became a bargaining chip in Putin’s talks with Ukraine’s president Poroshenko.”

Debaltseve is a strategic railway hub which was finally seized by Russian or Russian-armed troops on Feb 18, 2015, 6 days after Putin concluded the Minsk II agreement with the leaders of Ukraine, France and Germany.   That agreement involved a total ceasefire.

It is very much to be hoped that all of this is one day examined by the International Criminal Court in the Hague.

Whether this specific report provides sufficient proof can be questioned, but the arguments are compelling. There is also no question that the Kremlin’s proxies in the so-called ‘republics’ would have taken any decision not approved by the Kremlin.  Instead of seriously discussing withdrawal of sanctions at a time when the militants are threatening to execute prisoners and taking more hostages, EU officials should recall Putin at Minsk and the Battle of Debaltseve.