Donbas militants could sentence Ukrainian hostages to death for ’spying’ 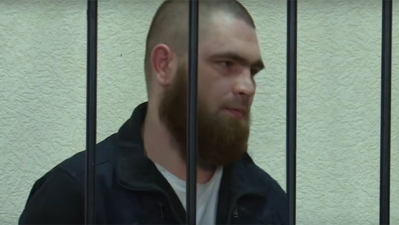 The first official ‘death penalty’ in the so-called ‘Donetsk people’s republic’ [‘DNR’]  was announced on Feb 12.  This follows new seizures of civilians, such as 60-year-old academic Ihor Kozlovsky and assertions that the Kremlin-backed militants are not holding hostages, only people accused of ‘crimes’ who could face the death penalty.  The information also comes 18 months after the first report that the militants had imposed the death penalty, numerous admissions of extrajudicial executions, as well as a video of the first ‘tribunal’ (by Luhansk militants) which passed such a death sentence’ through a show of hands.

Lyudmila Strateychuk, described as the acting head of the military tribunal and simultaneously judge of the ‘DNR Supreme Court’, reported the sentence at a press conference on Friday.  The sentence was passed on Anatoly Yakubenko in December 2015, but has not yet been carried out.  She says that he could be pardoned by the leader of DNR [Alexander Zakharchenko], while another Russian source quotes Edward Yakubovsky, described as the president of the DNR Supreme Court, as saying that Yakubenko has appealed against the sentence.

The man is accused of having been part of a gang within a Cossack union called “Oblast of Donetsk troops’.  Yakubenko is alleged to have shot dead 2 23-year-old women on March 8, 2015, after the women refused to have sex with him.

Yakubenko’s trial appears to have been fairly open and the charges against him are very serious.  The death penalty was abolished in Ukraine in 2000 after the Constitutional Court found it to be in breach of Ukraine’s Constitution, but this would not be the first time that the militants are demonstrating contempt for Ukrainian legislation.

Even more chilling is other information reported by Russian Interfax.  That quotes Strateychuk as saying that other cases are currently under consideration, and are over murders or ‘spying’.

In fact, the first question should really be: what is understood by ‘spying’?  Just days ago, Darya Morozova, the ‘DNR human rights ombudsperson’, was reported to have claimed that the militants are not holding any civilians nor anybody illegally.  She asserted that all those in custody are ‘under investigation’, and could be sentenced to death.

This could easily include volunteer coordinator Marina Cherenkova and Ihor Kozlovsky, a renowned religious specialist, both of whom were seized in late January this year.  Prominent DNR militant Alexander Khodokovsky is reported to have asserted that Kozlovsky, who is a much respected academic, could have been involved in “destabilizing the situation” and had “multiple contacts with various organizations in Ukraine engaged in destructive activities here”.

Morozova was commenting on the so-called 30-year ‘sentence’ passed on Yevhen Chudnetsov, a Ukrainian soldier from the Azov regiment who was captured in February 2015.  It is unclear when he was ‘sentenced’ and for what exactly, but there is a video which was widely shown on all Russian propaganda channels from soon after his capture, Chudnetsov has clearly been badly beaten.  Judging by the bizarre testimony and claims he makes, he has almost certainly also been subjected to torture and threatened.

DNR first announced the introduction of the death penalty (based on the 1961 Soviet criminal code) and a military tribunal back in August 2014.  More detail was provided of the so-called ‘military courts’ in November of that year.  There was a long list of offences to be tried, including insubordination, ‘state treason’, ‘spying’ and ‘desertion’, as well as looting, robbery, etc.

There was no information about the laws which were to apply and whether those administering them were in any way competent to do so.  Lack of confidence was justified given the ‘first people’s court of Novorossiya’ in October 2010, where an individual was sentenced to death on a show of hands after a woman claimed that the ‘defendant’ had raped her.

There were also strong grounds for believing that ‘desertion’, as well as what the militants deemed to be ‘spying’ or ‘state treason’ would be deemed capital offences.   Svitlana Matushko, for example,  recounted how she was held in a death row cell for seven days on the basis of an absurd denunciation and a search of her home which found Ukrainian flags and symbols.

Igor Girkin, the former Russian military intelligence officer, who held one of the main posts in DNR until shortly after the Malaysian airliner MH17 was brought down over militant-controlled territory, recently admitted to having carried out ‘executions’ while in control.  During the interview given to Komsomolskaya Pravda, Girkin admitted only to executing ‘looters’, however his senior aide Igor Druz had confirmed such executions to the BBC back in August 2014.  Druz then said that the militants had killed a number of people “to prevent chaos”.   Plenty of evidence was found in Sloviansk confirming that extrajudicial executions had taken place.

Gazeta.ru reports that its source within DNR says that “during the first months of the war in the republics up to 150 death sentences were carried out”.

The Minsk agreements to which Russia and the militants in Donbas are parties oblige both sides to exchange prisoners on an all for all basis.  Not only is this not happening, but new hostages have been seized.  There are currently at least 136 people held prisoner by the militants in both ‘republics’ with many of these civilians.  As well as Cherenkova and Kozlovsky, people who tried to visit relatives in Donetsk are reported to have been seized as ‘suspicious’.

It seems likely that they could be charged with ‘spying’.