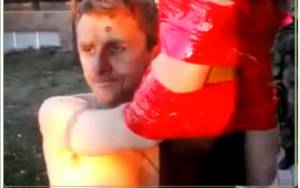 The man videoed being mercilessly tortured by a Russian militant has been recognized by local residents who confirm that the man was Alexei F., a resident of Komunar (on the outskirts of Makiyivka) who, ironically, had himself supported the Kremlin-backed rebels back in 2014.  The residents say that he vanished in October-November 2014 and it has now, unfortunately, become clear what happened to him.

The video* is harrowing to listen to, let alone to watch.  It appears to show a (masked) Russian national known as Olkhon lashing a man tied to a post whom the tormentor claims is a drug dealer.

As one blogger notes, in Ukraine a drug dealer would be sentenced at most to a few years imprisonment.

Here he is savagely lashed, with his tormentors yelling at him to answer more quickly.  Under such circumstances a person will confess to anything meaning that there is no evidence that the man had actually done anything at all.

Not for the first time, such crimes are being exposed as a result of brutal battles between different groups of militants.  In this case it is people from a band calling itself the Troy special purpose unit which came into bloody conflict with fighters loyal to Alexander Zakharchenko, leader of the self-proclaimed ‘Donetsk people’s republic’ [DNR] in January.  The website IV Vlada reports that as a result of this conflict, 94 fighters from the Troy unit are missing and were presumably killed.

The information in fact comes from an open letter to Zakharchenko from the ‘official representative of the NGO ‘Donetsk Republic’ in Russia, Yevgeny Shabaev. He writes that the Troy unit is mainly made up of Cossacks and ‘veterans of local conflicts’, and in the main Russian nationals.  The unit had received gratitude from DNR for its ‘service’ over 18 months, until “the outrageous instance of anti-constitutional actions” on Jan 29-30.

This began, Shabaev writes, with the commander of the Troy intelligence unit V. Novikov [Bely] being abducted and the two fighters with him shot in the back.  This was the beginning of an offensive against Troy fighters with the fate of 92 men unknown.

Shabaev does, however, note that fighters who managed to escape the siege reported that two trucks had taken away black bags probably containing the bodies of the missing militants.   He also demands to know the whereabouts of 24 others who were taken prisoner.

There have been many examples of brutal measures taken either against fighters seen as having got out of hand, or as presenting competition to the militants currently in control.  These are the leaders who are discussing ‘elections’ as part of the Minsk Agreement.  They have refused to allow Ukrainians from unoccupied territory to take part in the scheduled elections, and appear to prefer other methods, to the ballot box, for establishing who holds power.

Members of Troy have now posted the video about Olkhon who belongs to the ‘Novorossiya’ gang.  They say that the local resident was seized by Olkhon and his cronies, and that the man was eventually beaten to death.   They write on their VKontakte page that “all material concerning the illegal, criminal activities of the above-mentioned ‘FIGHTER FOR THE FREEDOM OF DONBAS’ will be handed with accompanying material to the military prosecutor of the Russian Federation (since he is a Russian national) for a decision to be taken regarding the war crime”.

There is considerable evidence that Ukrainians taken prisoner in Russia since the latter’s invasion of Crimea and undeclared war against Ukraine have also been subjected to torture in order to extract ‘confessions’.  The Russian prosecutor and other bodies have refused to investigate allegations, often backed by physical scars and injuries, from Crimean political prisoners Oleg Sentsov, Gennady Afanasyev; Oleksandr Kostenko; as well as those from Mykola Karpyuk, Stanislav Klykh and Serhiy Litvinov.

There is also ample evidence of war crimes committed by Russian Igor Girkin and his men, especially in Sloviansk, however all remain at liberty and Girkin is in fact a star on many pro-Kremlin media, such as Komsomolskaya Pravda’s radio service on which Girkin recently admitted to extrajudicial executions.

The only thing required for Russians fighting in Ukraine is that they do not admit to being there as mercenaries.

Otherwise all is well, with Russian President Vladimir Putin himself having effectively approved of so-called ‘volunteers’ who were allegedly driven “by a call of the heart”.

The men who razed the village of Kozhevnya to the ground in July 2014 also denied any mercenary motives, while  Zakharchenko, who recently admitted to this war crime, asserted that it had been necessary to save their lives and the lives “of our people”.

Presumably Olkhan, or whoever it was who tortured to death a Makiyivka resident in late 2014 was also impelled by Putin’s ‘call of the heart’. 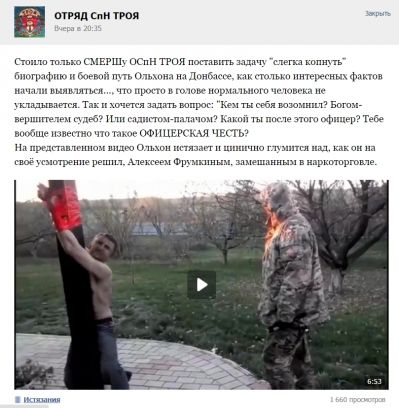