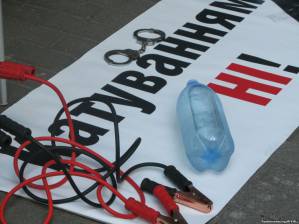 The European Court of Human Rights has ordered Ukraine to pay Svitlana Pomilyayko 20 thousand EUR in damages after accepting that she had been subjected to torture while in police custody, and that the authorities had failed to properly investigate her complaints.

Ms Pomilyayko had been assisted by the Kharkiv Human Rights Group both in fighting the prosecutor’s refusals to investigate  the case, and in lodging her application with the Court in Strasbourg.  This was back in 2012, with the events themselves dating from 2008, so it has taken a long time for the Kharkiv woman to get justice.

There were in fact two victims, however only Pomilyayko decided to make a formal complaint.  She and the other woman N.  had been taken in for questioning after two computers went missing from their work.

They were ‘questioned’ separately with the officers trying to get them to make ‘confessions’.   They refused and were finally released, but only after both signed statements that they had no criticism against the police. Both received documents from the hospital they went to confirming their account of the treatment they had received, however only Pomilyayko formally complained, and then went through a long to-and-fro process with a criminal investigation first initiated, then revoked, then initiated again, only to be terminated by a prosecutor’s office in Kharkiv.

The Government had nothing to say regarding Pomilyayko’s account of what had happened on Nov 8, 2008.

“9. At about 11.35 a.m. on 8 November 2008 a senior detective officer, T., accompanied the applicant to the fourth floor of the police station. He asked her to wait in the corridor and entered office no. 56. Five minutes later the applicant heard a woman’s scream emanating from that office. T. opened the door and directed an officer passing by to take the applicant to his office. She was made to wait there for about twenty minutes. Then T. took her to office no. 56. He pushed her inside, twisted her arms behind her back and handcuffed her, even though she had offered no resistance.

10. T. and his colleague, S., who was also in the office, intimidated the applicant with a view to making her confess to the investigated theft. They told her that her colleague, Ms L., had already started to “crack”. The applicant noticed Ms L.’s belongings on the floor. She concluded that it was her scream that she had heard.

11. Having failed to obtain a confession from the applicant, T. and S. made her sit on a chair, put a plastic bag over her head and started to strangle her. At the same time they struck her head, face and mouth so that she could not bite through the bag. The applicant fainted several times. When she told the officers she needed to use the toilet, S. hit her in the stomach and the head. She fainted once again and urinated involuntarily. Sometime later the applicant noticed the presence of another officer, P., in the office.

12. After several hours of ill-treatment, the applicant was taken to another office where she stayed for about twenty minutes. Thereafter she was brought before a female officer, who conducted her formal questioning.

13. At about 6 p.m. the applicant signed the official report of the questioning. She was then taken to the office of the head of the search unit, who stated that she was the main suspect in the theft case and that all her colleagues had indicated her as the likely thief. The applicant complained about her ill-treatment. Her complaint was ignored.

14. She was taken again to office no. 56, where the officers threatened her and tried to pressure her into confessing. She repeatedly refused to do so and professed her innocence. The applicant was forced to write a statement that she had no complaints about the way the police had treated her.

16. The applicant submitted to the Court five colour photographs of herself in which extensive bruising on her both arms and forearms is visible.”

The case was flagrant, so too were the attempts to terminate the investigation.  Fortunately the Government made no attempt to deny this, disputing as ‘exorbitant’ only Pomilyayko’s application for 70 thousand EUR in damages.  The Court awarded 20 thousand and expenses.