Russian crimes & religious persecution in Donbas that the Pope ignored 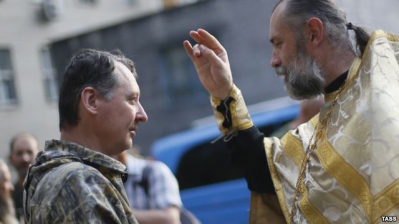 If it was bad for dialogue between Pope Francis and Patriarch Kirill to admit to Russia’s pivotal role in the war in Ukraine, they should have kept off the subject altogether in their Feb 12 Statement.  By muffling this, the document is offensively misleading  particularly given the evidence of systematic religious persecution by Russian & Russian-backed militants and the role played by many paramilitary groups under Russian Orthodox banners.  The "social solidarity" they speak of is not enhanced by open persecution of all faiths except the Orthodox Church under the Moscow Patriarchate, nor by the recent seizure of 60-year-old Ihor Kozlovsky, a religious specialist who had contributed enormously to inter-faith dialogue in his native Donetsk.

At least two of the ‘Cyborgs’ defending Donetsk Airport who were taken prisoner by Russian or pro-Russian fighters have said that their tormenters included a man wearing the clothes of an Orthodox priest, who used his cross as a means of torture.

Oleksandr Mashonkin spent 197 days imprisoned by fighters from the so-called ‘Donetsk people’s republic’ [DNR] before being freed on Aug 6, 2015.  During that period he was subjected to all kinds of torture, including a hot iron on his hands.  He  told Radio Svoboda that a “priest came, apparently from the Moscow Patriarchate, with a cross. He beat us with that cross around the head, perhaps he thought that would drive out our sins, he said we were monsters.”  When he broke the wooden cross on a prisoner’s head, he brought a metal one, and continued to hit them.

Mashonkin is a believer whose faith and the chapel he and other prisoners, including a military chaplain created in the corner of their cell, kept him going.  He says that he became calmer in spirt when he realized that their torturer was no priest, but a militant in priest’s clothes.  Yury Shkabura recalls that the man came to ‘Motorola’, one of the militant leaders, asking for “a couple of slaves”, and then “came up to us and began screaming that we’re traitors, Judases, and hit the guys with a cross around the head”.

Some of the men who survived have confirmed that it was Russian Motorola who killed another Cyborg Ihor Branovytsky.  His mother has demanded investigation of all cases where her son and other Ukrainian prisoners were tortured, including by the man in Orthodox priest clothes.

Torture of prisoners is an undoubted war crime whether committed by fighters, priests or people posing as such.

Radio Svoboda was assured by Yevhen Samoilenko from the Ukrainian Orthodox Church of the Moscow Patriarchate that no priests are taking part in torture.  He added that if such behaviour were proven, the person would be stripped of his right to serve.

Such firmness is welcome, however the denials of any involvement in the conflict from the Moscow Patriarchate are, like those from the Kremlin, irreconcilable with a massive weight of evidence.

The situation changed immediately and radically, first in Crimea and then in those areas of Donbas under Kremlin-backed militant control.  In both, all faiths except the Orthodox Church under the Moscow Patriarchate came under massive pressure and religious differences were certainly among the reasons why many people have left.  The believers who came every day to take part in the inter-faith prayer marathon in the centre of Donetsk were tolerated at first as long as there was no mention of Ukraine.  Later they began facing harassment, and a number of them were abducted and tortured.

The pressure – and abductions – abated during 2015, but it cannot be said that the situation has changed in any radical way.  This was demonstrated in the organized ‘demonstration’ outside the Ukrainian Greek-Catholic Church in Donetsk on Jan 29, 2016.  The participants were almost certainly public sector workers forced to appear at a demonstration calling on DNR leader Alexander Zakharchenko “to drive out sectarians”, who were alleged to be Western-paid or even linked with the CIA.

It remains unclear why Ihor Kozlovsky was seized on Jan 26 and remains in militant custody, but both his involvement with the Ukrainian Greek Catholic Church and his active part in Christian – Muslim dialogue were likely to be viewed with suspicion by the Kremlin’s proxies in Donetsk. 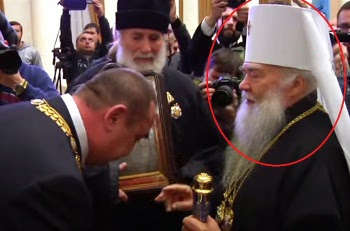 Metropolitan Ioanniky, until 2012 a member of the Holy Synod of the Ukrainian Orthodox Church (Moscow Patriarchate) at the ‘inauguration’ of Igor Plotnitsky, leader of the so-called ‘Luhansk people’s republic’

Professor Oleksandr Sahan, a specialist on the Orthodox Church in the world and relations between the state and different faiths, told Radio Svoboda that the Orthodox Church under the Moscow Patriarchate “remains a channel actively used for its own purposes by the aggressor state” [i.e. Russia].  “We are talking about a national centre which produces its own national ideology and effectively imposes it on its believers”.

In a 2015 study entitled ‘When God becomes the weapon’,   Ukraine’s Centre for Civil Liberties and International Partnership for Human Rights presented considerable evidence of religious persecution by militants in Donbas, and of  the role played by Russia and its armed criminal ‘crusaders’ in crimes against humanity in the region.

Whether or not the torturer in religious clothes had any connection with the Church, it is certainly true that religion has been a key motivating factor for many armed paramilitary groups fighting “under the banners of the Russian Orthodox Army and the Cossack Army”  Most worryingly, it has been cited as justification for many grave crimes committed in the so-called ‘Donetsk and Luhansk people’s republics’.

The authors point out that “open sources and witness testimony indicate that these armed groups also have local support from the clergy of UOC-MP and the Russian Orthodox Church”.  Examples are provided of some Moscow Patriarchate priests who “have, to varying degree,  supported these illegal paramilitary groups in their campaign against representatives of Protestant, Evangelical and Catholic Churches, and Orthodox believers who do not recognize the Moscow Patriarchate.”

Calls for all sides to lay down weapons, etc. cannot conceal the Moscow Patriarchate’s failure to react when crimes are being committed as though in its name.

While conflicts have arisen between differing armed formations, especially in ‘LNR’, the authors note that adherence to the Orthodox Church under the Moscow Patriarch and political ideas around the so-called ‘Russian world’ are largely shared by all pro-Russian militants.

Some of the Cossack ‘Russian world crusaders’ have also taken part in armed conflicts in the post-Soviet areas of Transdnistria, Abkhazia and Serbia.

For the sake of the four abducted and murdered members of a Sloviansk Evangelical Church, of 19-year-old student Yury Popravko savagely tortured to death by such ‘crusaders’, and very many other victims,  the Vatican really could have done its homework better.