Russian solo mother on trial for social network reposts in support of UkraineNew offensive against Russian poet convicted over poem in support of UkraineRussian poet sentenced over poem in support of UkraineWikipedia censors poet on trial for poem against Russian annexation of CrimeaPoet labelled ‘terrorist’, flung off Wikipedia for verse in support of UkraineRussian teacher on trial for poem against annexation of CrimeaKaliningrad ’flag prisoners’ charged with insulting the veterans Moscow rejects7 years for raising flag in protest at Russian invasion of CrimeaKaliningrad FSB finds ‘deep offence’ in a German flagRussia, the improbable human rights crusaderPutin’s selective terrorismPro-Russian thugs beat up Ukrainian unity demonstrators – except on Russian TVArmed men cut off Ukrainian channels in DonbasDonetsk television station seized to provide "correct" - Russian - coverageMoscow’s “Voice of the People” in SlovyanskMurdered in SlovyanskUS journalist released, others still held hostage in SlovyanskDonbas: abductions continue as Horlivka politician found murderedTwo journalists still held captive by Slovyansk militantsMore and more abductions in annexed Crimea
• Topics / News from the CIS countries 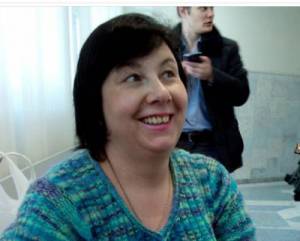 A court in Yekaterinburg has found 46-year-old Yekaterina Vologzheninova  guilty of ‘inciting enmity’ for reposting or ‘liking’ material critical of Russia’s annexation of Crimea and war in Donbas.  This is the latest of a number of prosecutions in Russia of people who have criticized Russia’s actions in Ukraine on social networks.  Those like fascist ideologue Alexander Dugin, who openly support the war in Donbas and who can be heard on a video recording calling for Ukrainians to be killed remain untouched.

The sentence could have been much worse, however like with other recent prosecutions, Judge Yelena Ivanova’s sentence of 320 hours of mandatory labour was harsher than that asked for by the prosecutor.  The verdict will, of course, be appealed.  Grani.ru reports that the judge also ordered that Vologzheninova’s laptop should be destroyed.  The hearing was attended by the French and German consuls in Yekaterinburg, and the sentence met with cries of ‘Shame!” from the courtroom.

The charges against Vologzheninova were under  Article 282 of the Russian Criminal Code - inciting ethnically motivated enmity (against Russians).  Enforcement officers turned up at her flat on Dec 12, 2014 and, after carrying out a search, took her away for interrogation.  Amnesty International reports that the investigators also questioned colleagues and acquaintances trying to prove that Vologzheninova had wanted to ‘incite enmity’.

It seems, however, that the judge had to content herself with a ‘psycho-linguistic’ assessment of the material on VKontakte which concluded that the illustrations and texts were aimed at inciting hatred and hostility towards Russians.  She chose also to be convinced that there had been ‘propaganda of inferiority’ in relation to a specific national group – Russians and residents of eastern Ukraine who did not support Kyiv’s political course.  The verdict states that there were also calls to violence against Russians, though it is entirely unclear where this was found.

One interesting moment, which may explain why the judge appeared an hour later than scheduled, was the removal of the charge pertaining to a caricature looking like Russian President Vladimir Putin.  This showed the Putin-look-alike with a knife in his hand which is raised over the map of Donbas

Ivanova stated that a cartoon looking like Putin cannot be grounds for criminal prosecution.  It seems rather more likely that Putin was removed because of the inevitable publicity over this case.  Certainly Ivanovna had no such concern about prosecution for criticism of the Kremlin’s actions in Donbas.

The material liked or reposted including content from Ukrainian sources.  She also reposted several poems and posts where Russians are described as ‘permanent slaves in body and soul”, and birdbrained.  She was accused of sharing links to documentaries and programmes about events in Ukraine, including ‘The Winter that changed us’ and the program ‘Brave Hearts’.

Vologzheninova’s lawyer Roman Kachanov has stressed that his client simply reposted material on the Internet without making any changes to them.

The message is chillingly clear: even reposts and ‘likes’ that go against Kremlin policy can get you into trouble.  The verdict was unfortunately expected.  Vologzheninova had already been added to Russia’s enormous ‘List of Terrorists and Extremists’ (no. 983 of a list currently containing 4, 431 names, including Ukrainian political prisoners Oleg Sentsov and others).   Her bank card has been blocked.

All of this is identical to the treatment of Russian poet and teacher Alexander Byvshev who in July this year was convicted of ‘inciting enmity’ and sentenced to 300 hours of community service.  He also had his computer confiscated, was labelled an ‘extremist or terrorist’ and was prohibited from working as a school teacher for two years.  In his case this was for the poem ‘To Ukrainian Patriots’ in which he expresses his opposition to Russia’s annexation of Crimea and suggests Ukrainians should ensure that not one inch of Crimea is handed “to Putin’s chekists” (see: Russian poet sentenced over poem in support of Ukraine).

The consequences can be much worse,

In June 2015, a Russian court sentenced 56-year-old Rafis Kashapov to three years imprisonment over social network posts criticizing Russia’s annexation of Crimea and aggression in eastern Ukraine.  These were deemed to have been ‘public calls to violate Russian territorial integrity’ and ‘hate speech’  They can be viewed here and should be shared widely as what can get a person three years imprisonment in Putin’s Russia.  Kashapov has been in prison since December 2014.  His case is now awaiting consideration by the European Court of Human Rights after the Russian Supreme Court upheld his sentence.

At the end of 2015, 35-year-old Vadim Tyumentsev from Tomsk (in Siberia) was sentenced to 5 years imprisonment for calls to peaceful protest and critical comments on the Internet regarding Russian military aggression in Ukraine and pro-Russian separatists.   Tyumentsov, who has been in detention since 28 April this year, was declared a political prisoner by the renowned Memorial Human Rights Centre in November.