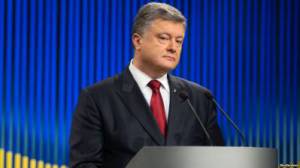 Ukraine’s parliament has adopted a law which could deprive believers of the right to alternative military service, a right enshrined in the Ukrainian Constitution.

Draft Law No. 4020 was put forward by President Petro Poroshenko on Feb. 4 and adopted in its first reading and in full on Feb. 18.  This, the Institute for Religious Freedom [IRF] points out, is in itself a breach of parliamentary regulations.

IRF had sounded the alarm about a fundamental flaw in the bill back on Feb 9, and, frustratingly, was ignored.  Law No. 4020 is on amendments to the Law on Military Service and makes a crucial – and unconstitutional – change to the present law.

Up till now the law stated that the call-up period was appointed by a Presidential decree.  This had to be published in the media no later than a month before the end of the year preceding the year in which the person was due to do military service.  That remains unchanged in normal circumstances, but not with respect to a decree on conscription “during a special period” (during mobilization).  In this case, the decree is published no later than a month before the call-up.

The fact that Ukraine has carried out and broadened mobilization without a formal declaration of war has already led to criticism from many commentators.  Volodymyr Yavorsky, board member of the Ukrainian Helsinki Human Rights Union, pointed out last year that the law on fighting terrorism does not envisage mobilization.  He considers that mobilization summonses can be challenged in court and that such cases have a good chance of succeeding at the European Court of Human Rights since the legal grounds for mobilization are at very least unclear and unforeseeable.

The problem with this new bill is that Article 9 of the Law on Alternative (Non-Military) Service requires the application to do such service to be submitted no later than 2 calendar months before the military service would begin.

IRF reports that the issue is not new and that Poroshenko’s decree for the call-up in 2015 was issued two and a half months after the term designated by the law.

Now the very law has been changed.   If Poroshenko signs it, and since he submitted it, this seems most likely, then believers could be prevented from applying for alternative service.

Ukraine’s Constitution is quite unequivocal.  Article 35 states that although nobody can refuse to do service altogether, “in the event that the performance of military duty is contrary to the religious beliefs of a citizen, the performance of this duty shall be replaced by alternative (non-military) service.”

The fact that Ukraine’s law does not allow for pacifism as grounds for alternative service is already a point of dispute.  Even people’s constitutional right to refuse to bear arms if this is against their religious beliefs has been ignored.