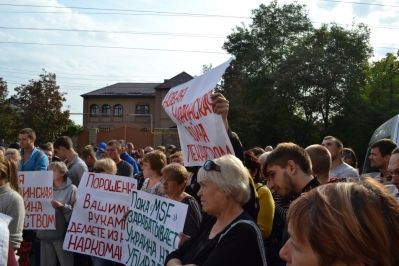 Marina Cherenkova has been released after nearly a month imprisoned and ’deported’ from the so-called &#146Donetsk people’s republic’ [DNR], with her vital ’Responsible Citizens NGO effectively accused of being a cover for western security services. There is no news about renowned religious specialist Ihor Kozlovsky taken prisoner a few days earlier

Enrique Menendes, one of Cherenkova’s colleagues, reports that she is well and that they have set off to meet her.

The militants had earlier announced their intention to ‘deport’ her.  Their version is that Cherenkova had been banned from entering DNR-controlled territory on Oct 7, 2015  “due to the unlawful activities of the NGO Responsible Citizens”.  She had  allegedly ignored this ban and continued her activities, for which she was “arrested” on Jan 29 to a 30-day period of administrative detention.

The militants claim that Cherenkova had long cooperated with NGOs in USA and the UK (USAID; NDI; NED; DFID; DRC and others).  They allege that she receives money from them and “carries out instructions, including those not linked with humanitarian activities”.

The report goes on to claim that the activities of a number of these organizations is only officially apolitical and that  western countries’ intelligence structures are active under the guise of humanitarian missions and social funds.  Their main tasks, the militants claim, are to gather information, exert influence on local officials “and as a result create zones of instability in various regions of the world.”

The same organizations are alleged to have taken part in the first Maidan, referred to as “disturbances” in 2004, “as well as the state coup in Kyiv in 2014”.

They assert that while on training courses in Europe, “western security services” established contact with Cherenkova.

The report does acknowledge that Responsible Citizens achieved some positive results and Cherenkova’s “good intentions”, but still claims that western security services had achieved a channel for getting intelligence about the situation in DNR.  This is supposedly confirmed by the immediate reaction to her ‘arrest’ by US representatives in Ukraine.

The militants claim that her release is “an act of good will” and confirmation of their commitment to peaceful resolution of the conflict.

To provide such ‘confirmation’, it would have been quite sufficient, together with the militants from Luhansk oblast, to release the hostages they have been holding for many months or longer.  Maria Varfolomeyeva, a Luhansk journalist, has now been held hostage for 13 months.  Instead, the militants seized new hostages, including Cherenkova and Kozlovsky.

The day after Cherenkova was taken away, four other members of Responsible Citizens were forced to leave Donetsk after 7 hours of interrogation.  Enrique Menendes, Dmytro and Yevhen Shibalov, and Olha Koss were also ‘accused’ of cooperating with international humanitarian organizations, including Médecins Sans Frontières (MSF) and Save the Children.

The militants allowed the four volunteers to take two of the six cars the initiative owned and personal items.  The other four cars, as well as a well-equipped office, have presumably been appropriated.

Cherenkova is the head of ‘Responsible Citizens’ which also cooperated with oligarch Rinat Akhmetov’s charity.  Ironically, the initiative was viewed by many of those who had been forced to leave Donbas as insufficiently critical of the militants.

60-year-old Ihor Kozlovsky had stayed in Donetsk to care for his paralyzed son.  Since his seizure roughly coincided with an offensive against the Ukrainian Greek-Catholic Church in Donetsk, it is possible that he was targeted because of his active involvement in interfaith dialogue.  Very worryingly, a DNR militant Alexander Khodakovsky recently claimed that Kozlovsky might have been involved in what he termed “destabilizing the situation” and had “multiple contacts with various organizations in Ukraine engaged in destructive activities here”.

Oleksy Matsuka, a prominent Donetsk journalist forced into exile, has reported other seizures and searches of Ukrainian teachers and members of Ukrainian NGOs over the last month and a half.  The increase in repressive measures, he believes, is linked with fear of social unrest with money from Russia rapidly running out, and disgruntlement growing.   The Russian-backed militants are also increasingly using anti-Western rhetoric and claiming that foreign structures and NGOs are present on DNR territory for ‘spying’ purposes.  This achieves what Russian occupiers are doing more openly in Crimea:  they drive out those who can provide information about rights abuses and express independent views.  They are also banishing those providing a truly vital lifeline in the midst of Kremlin-provoked humanitarian catastrophe in Donbas.