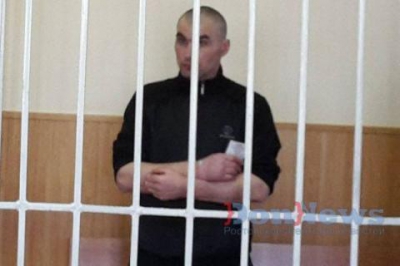 The trial has begun in Tarasovka, Russia of Serhiy Lytvynov on robbery charges which Russia’s Investigative Committee came up with after being forced to abandon a war crimes indictment based solely on lurid ’confessions’.  The fact that Lytvynov retracted them as soon as he was finally given a lawyer would almost certainly have been ignored, but some difficulties proved insurmountable even for Russia’s justice system.  The defence was able to prove that the ‘war crimes’ had never taken place and the alleged ‘victims’ and their addresses were fictitious.

In any real court the robbery charges would face the same fate.  The alleged victim is Roman Lysenko, a Russian national, who claims that he was beaten up and two cars stolen while in the Luhansk oblast of Ukraine.   The first problem is that Lysenko only reported this alleged crime a year after it was supposed to have taken place.  The second is even harder to combat, though Russia is trying very hard.  The alleged crime is supposed to have been carried out “on one of the days between 29 June and 2 July 2014 by Lytvynov together with an unidentified accomplice”.  The prosecution claims that, armed with a machine gun, they burst into a house, beat up Lysenko and stole two cars.

The Grani.ru journalist present at the court hearing on Feb 25 writes that Lytvynov asked several times to be released since he had not committed any crime.  He was held, as is always the case in Russia, in cage-like conditions and had a paper icon in his hand which he periodically kissed.  He had obviously been primed by Parshutkin and answered all questions from presiding judge Svetlana Shapavalova by saying that he supported his lawyer, and that it was for the latter to decide.

Lytvynov, a 33-year-old cowherd with learning difficulties, has been in Russian custody since Aug 22, 2014.  His village is close to the border which he crossed (as was once quite normal to do) in search of hospital treatment for an inflamed tooth.  He was seized and savagely tortured, until he confessed to multiple war crimes which he was supposed to have committed as a member of the Dnipro volunteer battalion.

The Investigative Committee’s announcement of the charges against Lytvynov, on Oct 1 2014 followed claims from the same IC that Ukraine was committing ‘genocide against the Russian-speaking population in Donbas”.  This was reiterated in the report on Lytvynov’s arrest, with Vladimir Markin claiming that Ukraine was trying to kill the population of Donbas, with the victims’ fault allegedly lying “merely in the fact that they spoke Russian and did not want to descend into nationalist hysteria and allow fascist ideology in their native land”.  “The character and style of the murders carried out by the National Guard and Right Sector resemble other similar crimes which the Dnipro Battalion Private Serhiy Lytvynov describes in detail in his testimony.”  In his public statement, Markov even claimed, again citing Lytvynov,  that the crimes had been carried out for money from the then Dnipropetrovsk governor Ihor Kolomoisky,

Lytvynov had ‘confessed’ under torture to personally carrying out murders of civilians, including women and children on the basis solely of anonymous denunciations.

The situation changed when Viktor Parshutkin was taken on as Lytvynov’s chosen, not state-appointed, lawyer.  His success in demonstrating that the impugned war crimes had never taken place and that the alleged ‘victims’ were pure fiction is probably the reason why the prosecution has been trying so hard to foist a state-provided lawyer onto the case.  This, however, went wrong and for a cheering reason.  At the hearing on Feb 4, the court ordered Oksana Kharchenko to take part against the wishes of both Lytvynov and Parshutkin.  Kharchenko herself tried to withdraw given that the client’s request for her to be withdrawn had been rejected.  The judge ordered her to take part, together with Parshutkin and a third lawyer, Viktor Vinogradov, whose participation is by agreement with the client.  She however informed the court that she had consulted with the Attorneys Chamber for the Rostov oblast and in accordance with their explanation, she could not take part in the trial and simply left.

The story and Kharchenko’s role is not at all clear, however she is said to have told  Lytvynov that she knows the supposed ‘victim’ Lysenko as a person who has long collaborated with the police.

As reported earlier, Lytvynov had applied for this supposed ‘robbery’ to also be tried as a war crime. This,   Parshutkin explained, would entitle him to trial by jury.  Since a jury will not simply dismiss proof of innocence as a normal court would, that would make it much easier to prove the lack of any substance to the charges.  This has been resisted by the judge, but Parshutkin is continuing to insist on his client’s right to such a trial.  He is also demanding that the fighters from the so-called ‘Luhansk people’s republic’ whose testimony against Litvinov is in the file be summoned for questioning.

It is now over 18 months since Litvinov was seized and tortured.  During that time he has not once seen his wife and teenage daughter.