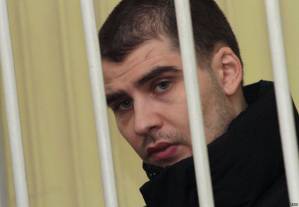 The Crimean Supreme Court has rejected Oleksandr Kostenko’s cassation appeal against a sentence which prompted the renowned Memorial Human Rights Centre to declare Kostenko a political prisoner.  The court did, however, edit one of the charges and reduced the sentence by five months.  Kostenko is in prison in Russia where his lawyer, Dmitry Sotnikov, reports, he is still being deprived of badly needed medical care.  There is one ray of hope, since a visit from the Ukrainian consul has been agreed.  This is important firstly because it confirms what Russia has tried to deny, namely that Kostenko remains a Ukrainian national. It will also give an opportunity to press for Kostenko to receive proper treatment for his arm which is atrophying through lack of treatment for the breakage caused – together with other injuries – after Kostenko was taken into custody.

Oleksandr Kostenko is an ex-Crimean police officer who took part in Euromaidan from December 2013.  He was initially sentenced by a Russian-occupied Crimean court to 4 years 2 months imprisonment over an alleged and unprovable offence in Kyiv, before Russia invaded and annexed Crimea.  He was supposed to have deliberately aimed a cobble stone at V. Poliyenko, an officer of the Crimean Berkut special force unit, with the latter having received a bruise on his shoulder as a result.  Kostenko was alleged to have been motivated by “a feeling of ideological hatred and enmity to law enforcement officers”.

It charged him with ‘”unlawfully obtaining, keeping or carrying the main parts of a firearm”.  The investigators claimed to have found a cut off rifle barrel when searching his home, although not one of the official witnesses of the search confirmed that weapons had been found in Kostenko’s flat.  The investigators claimed that Kostenko’s father, Fedir Kostenko had identified the gun barrel as belonging to his son.  They also claimed however, that it was Kostenko Senior who gave permission for the search.  Fedir Kostenko disappeared shortly after this in circumstances which also arouse concern.

Sotnikov explains that the Supreme Court removed such qualifying indicators as “bearing and purchasing the main parts of a weapon” in Article 222 of the Russian Criminal Code and therefore reducing the sentence by 5 months.

The court otherwise left the convictions on both of the above charges untouched.

The first court and now Russia’s Supreme Court ignored considerable evidence that his first ‘confession’ had been tortured out of him, and flagrant infringements of procedure from the moment of his arrest.

Kostenko was officially detained on Feb 6, 2015, but there are witnesses who can confirm his assertion that he was in fact seized by FSB [Russian Security Service[ officers in Simferopol a day earlier, on Feb 5.

Kostenko retracted all such ‘confessions’ as soon as he was able to see to a real lawyer.  This was ignored by Judge Mozhelyansky who took only the original ‘confession’ and first interrogation into account and found Kostenko guilty of both charges.  The court of appeal upheld the conviction, but reduced the sentence to 3 years and 11 months.  Now the Supreme Court has effectively rejected the cassation appeal but knocked another three months off the sentence.

Since the last legal remedy in Russia has now been exhausted, the next step will be the European Court of Human Rights.  The list of likely complaints is very long, but will surely include the legal absurdity of one of the charges; gross procedural irregularities;  the fact that, in the face of compelling physical evidence, Kostenko’s retraction of confessions as obtained through torture was ignored and no investigation carried out.