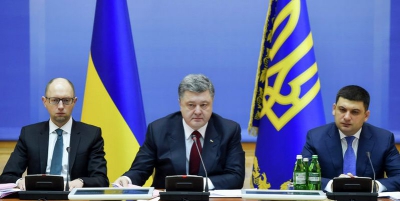 President Petro Poroshenko has ignored calls from Ukraine’s two election watchdogs and others, and signed into law a bill with grave consequences for electoral rights.  Described by the Committee of Voters of Ukraine [CVU] as “the law on party dictatorship”, Law No. 3700 allows for a candidate in a multi-mandate electoral district to be removed from the candidate list after the election results have been announced, if the decision is taken by a party congress.  The law would apply to the lists of parties that took part in the October 2014 parliamentary elections.

CVU warns that the law violates a fundamental civic right, enshrined in Ukraine’s Constitution, namely the right to elect and be elected.  A political party is able to exclude candidates from the list after the voters have indicated their choice, thus overriding the election result.

Both CVU and OPORA had called on the President to veto the law.  In a statement condemning the bill after it was passed by parliament, OPORA also pointed out that the bill had been adopted with serious infringements of procedure.  Most dangerously, it does not provide the grounds which would enable the removal of a candidate.  Nor does it outline procedure for the relevant decision at a party congress.

CVU in its turn called on international organizations to intervene, saying that « the elections are perhaps the only institution in Ukraine which, despite certain failings, work and enable Ukrainians to exercise their power.  The adoption of the Law ‘on party dictatorship’ does not only violate electoral rights, it also jeopardizes democratic processes in Ukraine”.  The bill, CVU Head Oleksy Koshel suggests, is an attempt to usurp power, and could lead the way to parties being able to bring in convenient, obedient MPs, or even businessmen, etc. for money.

Ihor Koliushko from the Centre for Political and Legal Reform says that the law is in breach of norms of the law and European principles of parliamentarianism.  Ukraine’s lawmakers have basically demonstrated that for the parties they represent, the voter’s choice is nothing and that the lists can be fiddled as suits the parties’ leaders. 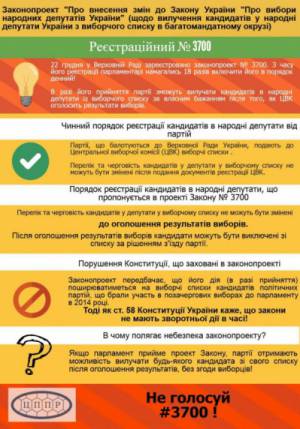 A warning leaflet on all the dangers of Law No. 3700 , calling on parliamentarians not to vote for it.  Ignored by parliament and by the President

Gallingly, the bill was tabled by the leaders of all the parties until recently in coalition.  During its registration on Dec 23, 2015, there were 18 attempts to get it put on the agenda.  Presumably efforts were underway to scratch up the needed votes and when they got them, the bill was rushed through, breaching parliamentary regulations, in its first reading and in full on Feb 16, .

CVU has called on the Human Rights Ombudsperson Valeria Lutkovska to use the right she has and to make a submission to the Constitutional Court asking for an opinion as to whether the bill complies with Ukraine’s Constitution.

Such encroachments on the rights of the voters have been made before, most notoriously in March – April 2010 when the newly elected President Viktor Yanukovych used a fiddle to ignore a Constitutional Court judgement and allow party turncoats to determine which party formed the government.  Huge amounts of money were widely believed to have changed hands as party affiliation suddenly proved extremely fluid.  The Constitutional Court then produced the first of a number of seriously disturbing judgements, overturning the same judges’ judgement of a mere 17 months earlier to find such a means of gaining control ‘constitutional’.

It is impossible that Poroshenko was not aware of the serious arguments against this new bill and the infringements in the adoption of the law.  Neither he, nor Ukraine’s lawmakers, can claim ignorance about the fundamental principle that laws are not retroactive, yet this law actually allows for changes to the candidate lists at the 2014 parliamentary elections.  This, according to many of the reports may in fact be the aim of the law.  It is suggested, for example, that the bill is needed to remove Andriy Bohdan who may otherwise take a seat in parliament.  Bohdan is currently the lawyer representing Hennady Korban, whose recent arrest and scandalous detention hearing are widely believed to be linked with Poroshenko’s battles with oligarch and Korban associate Ihor Kolomoisky.

The fact that Bohdan was next on the list of the Petro Poroshenko Bloc may well present difficulties for that party.  It does not justify a law which jeopardizes Ukrainian voters’ rights and casts a serious shadow over the country’s leaders’ commitment to democratic elections.