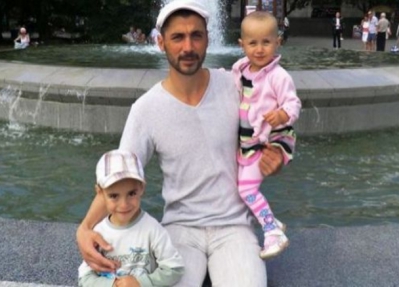 It is two years since 39-year-old Reshat Ametov came out in silent protest against the Russian soldiers who had seized control in his native Crimea.  The Crimean Tatar father of three was abducted by pro-Russian paramilitaries from outside the parliament buildings in Simferopol on March 3, 2014.  His body, beaten and hideously mutilated was found on March 15.  There were handcuffs nearby and Ametov’s head had been bound with tape.  The torturers had used something like a knife, and he died finally from brain damage after they gauged out his eyes.

Despite video footage clearly showing his abductors, no arrests were ever made and the investigation was terminated a year ago.

Zarina Ametova spoke recently with a QHA news agency journalist about the last time she saw her husband, about the ‘investigation’ into his killing and how she was under surveillance.

Back on March 3, 2014, she had no idea what her husband was planning.  She had recently given birth to their third child, Usnieshke, and says that, of course, if she had known, she would have tried to stop him.  He made sure that she wasn’t watching as he wrote on Facebook that he would be standing in protest outside the government buildings from 8 a.m. on Monday morning.

She learned later that he had gone out the previous evening to ask friends to join him in a silent protest.  He spoke with about 30 men who were guarding the village.  They were all afraid and advised him not to go either, reminding him that he had small children.

Ametov went alone, and had been standing for an hour and a half – two hours when he was seized.  It is clear from the video that he tried to resist, obviously understanding the danger, only when they forced him into a car.

The official pretext for suspending the investigation was that ‘the suspected killer’ was fighting in Donbas.  Ametov’s widow is scathing of such an excuse, pointing out that the video shows that there was not just one person responsible and you can see them on the video.

In the middle of February 2016, she was visited by an investigator who said that they would be continuing the investigation.  The point of this seems questionable, with the investigator claiming that you can’t see anything on the video, and instead questioning Ametov’s brother, Refat.

“How long can they go on constantly harassing us?  It’s terrible, frightening, how long can it continue?  You walk along and don’t know if you’ll get to your home. I feel all the time that I’m being followed, because they did follow me. There was a car, always one and the same – a black Opel, that followed me to the kindergarten, to the school. When I saw that car, I forgot everything, my hands shook.”  That was about a year after her husband was killed, and lasted around a month.

Her elder daughter was 3 when Ametov was killed.  She adored her father, was devastated at his disappearance and still seems to be waiting for him to return.  Her son does understand that his father was killed, but when they’re sitting together, eating, he tells his mother that there are not just four of them.  “Babashka [Papa] is sitting with us.  He’s always with us.”

Bariev calls Ametov the symbol of the struggle in 2014 for Ukrainian territorial integrity against Russian aggression.  He has been declared People’s Hero of Ukraine, but this is an informal title.  Bariev is surely right that Reshat Ametov, the first victim and a man who found in himself the courage to come out alone in defiance and protest, deserves to be posthumously awarded the title of Hero of Ukraine.

Together with our deep respect and remembrance.