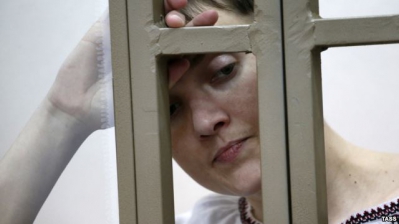 Update:  Update:  Nadiya Savchenko has issued a statement formally declaring a dry hunger strike from 04.03.2016 “until my return to Ukraine, alive or dead”.   This she states is in protest at the actions of the Russian authorities, security service, court and prosecutor’s office and at the fact that they are trying to hide their crimes.  She repeats that they are in breach of international law and guilty of abducting her, taking her by force to Russia and holding her in detention.

She prohibits any attempts to force her out of the hunger strike; to take any blood tests, etc. or to force her to take any medication.  She will not allow any Russian doctors or SIZO [prison] staff to touch her.  She will agree to be examined only by doctors from Ukraine or Europe. She insists that they must not move her from the cell or SIZO without explaining the reason and the destination.

“I will regard any use of physical force towards me as torture and will show resistance.

In the event of my death, I prohibit any autopsy and demand that my body is passed whole to my mother and sister. “  Her decision, she stresses, is final.

This statement, passed to her lawyers, is written in Russian.  A separate letter in Ukrainian is very brief.  She writes that “Freedom has no price.  I don’t believe anyone in Russia.  I am not afraid, and not asking for anything.  This is my final word.

With Ukraine in my heart, Nadiya Savchenko”

Where now, if Nadiya Savchenko refuses even water?

In protest over the sudden refusal to let her give her final statement, Nadiya Savchenko has announced that from Friday she will refuse even water. Her defiance is courageous as ever, her speech stirring, but the chilling fear remains that Russian President Vladimir Putin, who has no track record for respecting human life, will not budge.

The former military pilot was reacting to the sudden about-turn in court on Thursday and announcement that her final address to the court would be postponed until Feb 9.  If the delay was aimed at preventing the foreign journalists present reporting her powerful indictment of Russia’s treatment of her, it almost certainly backfired.  If Savchenko maintains her threat to go on a total hunger strike from Friday, then it is likely that by March 9, she will already be in a gravely weakened state.  She has not been taking food since mid-December and she will surely lose strength rapidly.

The postponement until March 9 was announced just after 16.00 and clearly came as a shock to the defence team.  Ilya Novikov tweeted that it could be to prevent her final address, or because something was wrong with the paperwork and they wanted to send the case back to the investigators.  The latter would seem incredible given the huge amount of elements in the prosecution’s case that do not add up.  The equally flawed case against Ukrainian filmmaker Oleg Sentsov did not stop a military court in August 2015 from passing a 20 year sentence, despite absolutely no grounds, and after one of the two other defendants had, at considerable risk to himself, retracted all testimony as given under torture.  All democratic countries and European structures have made their condemnation of the proceedings abundantly clear.

The address Nadiya Savchenko was planning to make is undoubtedly strong. She rejects all the charges and any verdict, and reiterates her earlier stance that she will not appeal a conviction.  She says that she wants the entire “civilized democratic world to see that Russia is a third-world country with a totalitarian regime ruled by a petty dictator, a country that spits on human rights and international law”. She refuses to have any part in an absurd trial where those who abduct and torture people then put them on trial.

As noted here, this position is of serious concern.  In fact, Nadiya Savchenko has taken part in the trial up till now, despite its absurdity and the obvious collaboration between the prosecution and court.  Even if she is returned to Ukraine, as is to be hoped, Russia abducted her and has held her in detention for nearly two years.  It would be a fatal mistake to reject the opportunity to take Russia to the European Court of Human Rights, yet the latter would be forced to reject any application if all possible appeals had not been lodged.  The Court will not make exceptions just because the outcome is known in advance.

In the written version of her address, posted by her sister Vera, Nadiya says that she will continue the present hunger strike for 10 days until the verdict, in the absence of appeal, comes into force.  She notes that this is regardless of how long it takes to get the Ukrainian translation, since she’s seen how they drag things out.

After that, she planned to warn, she would go on a total dry hunger strike.  She predicts that Russia would have around 10 days after which, if they had not returned her alive, they would be returning her body.  She warned that during those 10 days her sister would stand vigil outside the prison. If they imprisoned Vera Savchenko, then her elderly mother would stand in. If they dared arrest her, then there would be friends, and simply Ukrainians.  They couldn’t arrest them all.

If the court had seen the speech in advance, then this part of the text would have undoubtedly made them turn pale.  Nadiya Savchenko points out that there will be ordinary decent Russians who will come to the prison gates to provide hot tea and food for those standing vigil.  Each of them understands that their child could end up there also in that prison which is Russia.

This, she says is how Maidan begins – the mass protests that the Russian regime fears like fire.  The Kremlin would be better off returning her to Ukraine now and alive!

The speech is stirring, but the chilling fear remains that the Kremlin will not react.  Just over a year ago, Mustafa Dzhemiliev, the renowned Crimean Tatar leader and Ukrainian MP who himself spent 15 years in Soviet labour camps, called on Nadiya to stop her first hunger strike.  He used the same argument with which, when he was equally resolute in 1975, Andrei Sakharov had saved his life.   Mustafa Dzhemiliev had been allowed a visit from his mother and elder brother because his condition had become critical.  He explains that even then he was totally resolute.  Then his brother managed to slip him a card from Sakharov.  It read: “Mustafa, son, I’ve done everything I could and I now ask just one thing: enough of this hunger strike – your death will only bring joy to our enemies."

Nadiya Savchenko did not immediately heed that call, but did finally stop the hunger strike and has continued fighting through other means.  She can continue doing so now.  A total hunger strike, without even water, in a country whose leaders have so often demonstrated their total lack of respect for human life is a terrifying risk.

Details about the sentence demanded, international condemnation and the address to write to Nadiya here: Savchenko: You haven’t broken me & you won’t. I am no object for bargaining 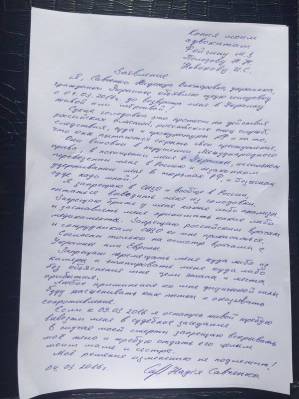 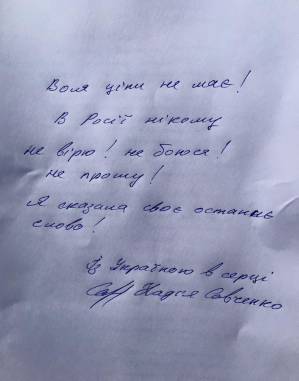