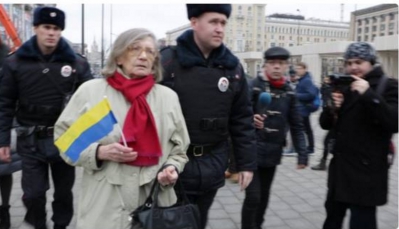 At least 39 people were detained in Moscow on 8 March, a large number of them women marking International Women’s Day by demanding the release of imprisoned Ukrainian Nadiya Savchenko.  The Russian enforcement officers, in turn, marked the occasion by carting them off to police stations. By late evening, some had been released, but 13 people were spending the night in cells.  They all appear to be accused under two notoriously over-used articles of the Code of Administrative Offences: disobeying the legitimate demands of a police officer and infringing the rules for holding a meeting.   Both under President Vladimir Putin are regularly used  to justify violations of the right to freedom of peaceful assembly affirmed in Russia’s Constitution. 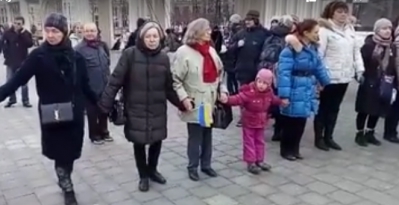 Two picketers were detained although single-person pickets are allowed without any form of permit.  The police apparently decided to consider that the distance between the two picketers was less than 50 metres, with this, oh horror, turning it into a meeting.

Protests have also been taking place in St Petersburg with the same repressive measures from the police.

More details of those detentions as they become available.

It should be stressed that even an administrative penalty in Putin’s Russia is no small matter.  Under draconian anti-protest laws, after three such penalties within 6 months, a person can face criminal charges.  Ildar Dadin has been sentenced to 3 years imprisonment for four totally peaceful protests, including a single-person picket.

The previous evening, four people stood with a Ukrainian flag, a sign calling for Nadiya Savchenko’s release and sang the Ukrainian anthem.  A voice can be heard telling the police (or internal forces) to let them finish the song – “it is an anthem, after all”.

Do please watch the video  https://youtube.com/watch?v=XtWF8DgB9NY

Back in August 1968, 8 Russians came out onto Red Square in protest at the Soviet invasion of Czechoslovakia.  They knew what to expect, and the arrests and persecution were indeed immediate.

Watch the faces, in 2016, of the people coming out of the metro station – they also clearly know what to expect.

One of the people explains why they are coming out onto Red Square.  In fact, they were stopped, by a police officer who recognized them, and went instead to Lubyanka Square outside the huge FSB and former KGB building.

They were demanding the release of Nadiya Savchenko “who is being killed by the Putin regime and, personally, by Comrade Putin”.

They demanded also the release of the four Crimeans – filmmaker Oleg Sentsov; Oleksandr Kolchenko; Gennady Afanasyev and Oleksy Chirniy – sentenced by Russia to monstrous terms of imprisonment on trumped-up charges because of their opposition to Russia’s occupation of Crimea.

And they called for an end to the persecution of the Crimean Tatars.

Glory to Independent Ukraine and Freedom for Nadiya Savchenko.

They were all forcibly detained and taken away.

Nadiya Savchenko began a dry hunger strike on Friday.  There have been calls from all over the world, from the EU, the USA, and a large number of Russian public figures for her release.