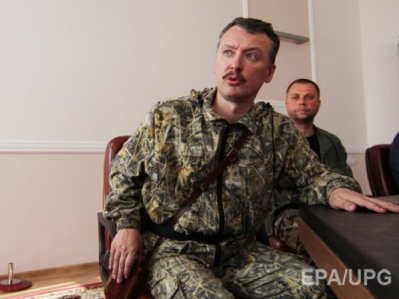 Following the public admission by Igor Girkin [Strelkov] that he ordered extrajudicial killings during his period as military leader of the Kremlin-backed militants in Donbas, a St Petersburg lawyer, Arkady Chaplygin has demanded that Russia initiates criminal proceedings against Girkin for committing what are undoubtedly war crimes in eastern Ukraine.

Interestingly, the interview which Girkin gave to the pro-Kremlin Komsomolskaya Pravda in 2016 has now been removed.  It was, however, widely reported, and there are undoubtedly plenty of copies around of Girkin’s admission to war crimes.

He was asked how they had fought looting, and answered “through executions.  Because during a war, especially in conditions of siege, all courts… “  He then claimed that they had a ‘military court’ and imposed the legislation introduced by Soviet dictator Joseph Stalin in 1941 (when Nazi Germany invaded the USSR).  “On the basis of that legislation, we carried out trials, executions.  In all four people were executed during my time in Sloviansk.”  One, he says, was “an ideological supporter” of the Ukrainian nationalist ‘Right Sector’.

This may have been the first time that Girkin admitted to the executions, but his aide, Igor Druz had informed the BBC of them back in August 2014.  While Girkin admitted only to killing ‘looters’, Druz was entirely open, saying that the militants had killed a number of people “to prevent chaos”.

Chaplygin has lodged a formal statement with the Russian Federation Central Investigative Department.  He writes that the crime is under the jurisdiction of Russia’s investigative bodies since it was carried out by a Russian national, and the foreign state (Ukraine) had not passed any sentences.  Chaplygin says that he will appeal against any refusal to initiate criminal proceedings, and that they will seek a proper investigation, collecting information for this.

There is, in fact, plenty of evidence, including ‘death sentences’ signed by Girkin himself, which were found by foreign journalists after the militants fled in early July 2014.

Girkin himself expresses confidence that he does not need to fear the International Criminal Court in the Hague “since this is an instrument in the hands of the victors”. He also suggests that he would never end up there since he knows too much.

He certainly knows too much for Russia to initiate criminal proceedings against him.  Girkin is believed to have been a GRU or Russian military intelligence officer until at least 2013.  He was heavily involved in Russia’s invasion of Crimea, before moving to Donbas where he led the heavily armed men who seized control of Sloviansk in April 2014.  He later acted as ‘defence minister’ of the so-called ‘Donetsk people’s republic’ [DNR].

He and Alexander Borodai, another Russian DNR leader, were removed in late summer when it became politically expedient for the Kremlin to install Ukrainian nationals in top posts.  In Girkin’s case, this had become particularly desirable after the downing of the Malaysian airliner MH17.   Although the claims that the reports on his social network page were fakes, there is ample evidence that the militants triumphantly reported downing a Ukrainian military transport plane.  The reports on Russian media about this showed footage from the MH17 disaster.  They were later removed, though not quickly enough for the Kremlin.

One of the most disturbing parts of the Komsomolskaya Pravda program was the way Girkin was introduced to the audience as “hero of the Russian Spring” who “defended Donbas” as the audience’s ancestors had once defended Russia.

It seems that KP or their masters in the Kremlin have understood that some ‘heroes’ need to be censored.

During the months that Sloviansk was under militant control, it was hard to keep up with the abductions and hostage-taking and there were a large number of cases of torture and killing as well as extrajudicial executions. At least one mass grave was found after the militants fled.

Girkin had his headquarters in the Sloviansk SBU [Security Service] building.  Hostages were held in the basement there, as well as in the central police building, and in both places were subjected to torture.  ‘Executions’ were carried out in the police investigators’ offices on the basis of the so-called ‘death sentences’.  The ‘military tribunal’ was made up of militants referred to as “Nos” [Nose], Sedoy [Grey-haired], etc.

Girkin was either lying about the ‘executions’ he reported, or only mentioning some.  31-year-old Oleksy Pichko  was ‘sentenced to death’ and shot by firing squad for stealing two shirts and a pair of trousers from a neighbour’s home.  Vitaly Solovyov was 36 when he was arrested in the home he shared with his elderly grandmother, accused of looting and sentenced to death by the same grotesque ‘tribunal’.  Another such ‘trial’ and execution order was of a 25-year-old student who had arrived in Donbas to defend his country.