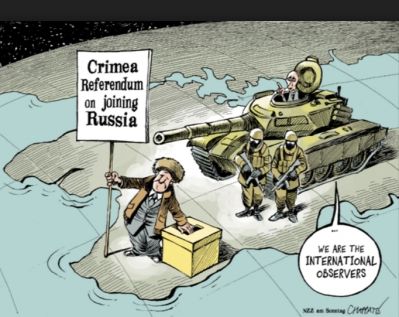 © Chappatte in NZZ am Sonntag, Zurich

It is exactly two years since the so-called ‘referendum’ in Crimea which Russia cites as justification of its annexation of sovereign Ukrainian territory. The anniversary comes as Russia looks set to criminalize the Crimean Tatar Mejlis or elected representative body of the main indigenous people of Crimea which in 2014 called on all Crimean Tatars and others to boycott the event. Since it also comes at a time when the West is pushing Ukraine to agree to ‘elections’ in the Kremlin-controlled areas of Donbas, it seems worth recalling that supposed ‘expression of the people’s will’ and the motley crowd of far-right, neo-Nazi or extreme left-wing politicians who were invited to oversee it.

There were two questions.  No. 1 asked:  Are you for the Crimea re-uniting with Russia, as a subject of the Russian Federation?  No. 2:  Are you for the reinstatement of the 1992 Constitution of the Republic of the Crimea and for the status of the Crimea as part of Ukraine?  Neither question allowed for Crimeans to opt for the status quo.  Since the second alternative required more knowledge of a largely theoretical constitution in force for only around 13 days in 1992, it was relatively unlikely that anybody would choose that option (more details here). 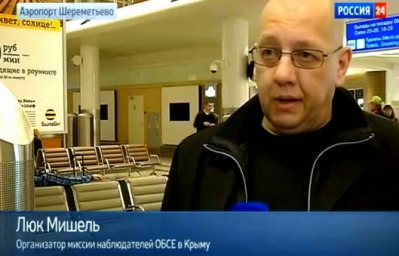 The event was in clear breach of Ukraine’s Constitution which stipulates that any decision changing Ukraine’s territory must be put to a nationwide vote.  It was declared illegitimate not only by the Crimean Tatar Mejlis, but by the USA, EU countries, the European Parliament, the OSCE and Ukraine’s two main election watchdogs - the Committee of Voters of Ukraine and OPORA.

The Kremlin therefore turned to its friends.  The team was led by Mateusz Piskorski. He once had links with the Polish far-right, but his main focus, and that of the new Zmiana Party which he headed early in 2015 seems to be an aggressively pro-Russian position on everything, including Ukraine.  Piskorski himself has for years now faithfully served as a mouthpiece in support of Vladimir Putin’s Russia, with this including rubber stamping Russia’s ‘electoral’ stunts in, for example St. Petersburg, Moldova, Crimea and Donbas.  He claims that he does not receive any funding from Moscow.

At least some of the Crimean ‘observers’ were financed by the Russian-based Eurasian Observatory for Democracy and Elections headed by Luc Michel and Jean-Pierre Vandersmissen, both supporters of the neo-Nazi Jean-François Thiriart and members of the extreme right Parti Communautaire National-Européen (PCN-NCP).  The list of supposedly 135 observers included representatives of the far-right parties Jobbik (Hungary); Ataka (Bulgaria); Vlaams Belang (Belgium); Freedom Party (Austria) and others. There were also members of neo-Stalinist or extreme left-wing parties, including Germany’s Die Linke.  Two Bundestag deputies from this German party have since twice visited militant-controlled Donbas, providing propaganda stunts for the so-called ‘Donetsk people’s republic’.

Anton Shekhovtsov reports that according to his sources, the ‘observers’ were paid USD 1600 for a 4-day trip to Crimea, as well as USD 250 per diem.  Whether the reason lay in remuneration or elsewhere, it is certainly clear that the observers were there to praise everything.  Some seemed in something of a hurry to demonstrate their willingness to serve.  In a report on March 15, over a day before the event, the Kremlin-funded Russia Today quoted “an American foreign affairs analyst of Serbian origin, Srdja Trifkovic” as describing it as “legal and legitimate, democratic and right”. Trifković, Shekhovtsov notes, was a member of Radovan Karadžić’s wartime Republika and spoke in his defence during the war crimes trial in the Hague.

All these guests were effusive in their admiration.  Far-right Catalonian politician Enrique Ravello called the event “an example for us all”.

It should be stressed that despite all of the Kremlin’s claims that it was ‘saving Crimea’ (and Donbas) from far-right anti-Semitic hordes, those invited to act as observers in Crimea – and militant-controlled Donbas, and to visit since have often been from notoriously anti-Semitic parties, such as the Hungarian far-right Jobbik Party.

The event was widely criticized and it is only Russia and the Kremlin’s friends who seriously call it a real referendum.  Even Putin’s own Human Rights Council confirmed, after a visit to Crimea, that the turnout had been much lower than reported, and the results far less overwhelmingly in favour of joining Russia.  The report found that while a large majority of residents of Sevastopol (where the Russian Black Sea Fleet was based) had voted for ‘joining Russia’ (turnout of 50-80%), the turnout for all of Crimea was from 30-50% and only 50-60% of those voted for joining Russia.

The authors also noted that Crimean residents had voted less for joining Russia, than for what they called an end to corrupt lawlessness and thieving rule of people brought in from Donetsk (where Viktor Yanukovych and most of his people were from).  It was only in Sevastopol, they say, that people genuinely voted for joining Russia.  The report was prepared by Council member Yevgeny Bobrov; together with prominent human rights defender Svetlana Gannushkina and lawyer Olga Tsetlina, following a visit to Simferopol and Sevastopol from April 15-18.

Retribution against Crimean Tatars who opposed annexation and refused to take part in the farcical referendum was swift.  It has since intensified, and the Mejlis’ leaders are now exiled or imprisoned. Those few still at liberty may not be for long if the Mejlis is outlawed.