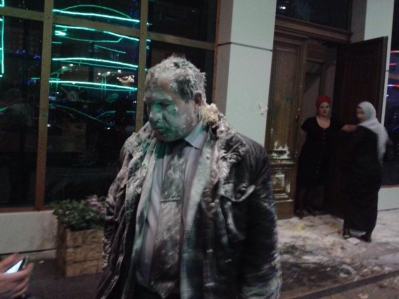 Igor Kalyapin, head of the Committee against Torture was attacked in Grozny on Wednesday evening, just one week after a savage attack on members of his committee, other rights activists and journalists driving into Chechnya from Ingushetia.  The attacks are a chilling indicator of the lawlessness under Ramzan Kadyrov, the Chechen leader installed by Russian President Vladimir Putin.

Kalyapin was supposed to be meeting with rights activists and journalists who had come to Grozny to cover the trial of two Ukrainian political prisoners Mykola Karpyuk and Stanislav Klykh.  The hearings were in any case adjourned, but these attacks will almost certainly deter journalists from attending a murky trial that urgently needs publicity.  Russia’s two-year imprisonment of Karpyuk and Klykh and their trial must be of particular interest to Kalyapin since there is compelling evidence to back the two men’s allegations of horrific torture while they were held incommunicado.

Kalyapin says that he checked into the Grozny City Hotel at around 18.00, and was visited around 40 minutes later by two journalists and a cameraman.  They were taking an interview when a man turned up and announced that he was the general director of the hotel. He was together with a security guard and one other man, and informed Kalyapin that since the latter criticizes Kadyrov and the Chechen police, he must leave the hotel.

Kalyapin called the actions illegal and asked for something in writing explaining that he had been removed because he doesn’t like Kadyrov.  This was ignored, and he was taken downstairs where he was ‘detained’ by a crowd of around 30 women who’d obviously be rounded up from the hotel staff and adjourning boutiques.  They all shouted that he must not dare to speak badly of Kadyrov, and prevented him from leaving the hotel.  Kalyapin understood that they were delaying him until thugs arrived, but says that he had nowhere to run anywhere.  He’d sent his colleagues off in the car while it was still light and it would have been unfair to ask them to drive to Grozny at that time.  It would have been desperately dangerous for him to have asked any Chechen acquaintances to put him up, and it was clear that no Grozny hotel would give him a room.  He got through to an investigator he’d once worked with.  The man did turn up, but only later, after the attack.

According to Anton Naumlyuk, a Radio Svoboda correspondent who witnessed the events, there were around 15 young masked assailants of strong build.  The police did not try to catch them, claiming that they didn’t know who they were and that it was impossible to identify them.

While this time the assailants only dealt a few punches, and mainly hurled eggs, flour, cake and zelyonka [brilliant green dye] at him, the attack was clearly coordinated with his removal for criticism of Kadyrov and a warning to him and other rights activists. 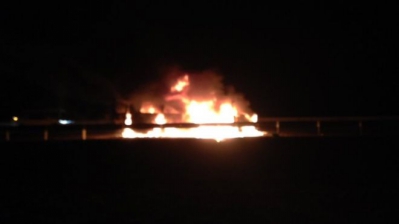 There have been international calls for a proper investigation into the March 9 attack in which the activists, including two foreign nationals, and journalists were pulled from their car and beaten up.  The car was set alight.  Kalyapin reported the attack as one against members of his Committee, and one of the lawyers apparently told the AFP news agency that the attack had probably been orchestrated by Chechens.

Over recent months, Kadyrov has made one inflammatory remark after another about the opposition, calling them, for example, “enemies and traitors of Russia” who must be ‘punished’.

At the beginning of February, Kadyrov posted a video on Instagram  (which Instagram itself later removed) showing opposition leader Mikhail Kasyanov directly under a sniper’s vision.  The chilling message reads: “Kasyanov has arrived in Strasbourg for money for the Russian opposition.  Who hasn’t understood, will understand”.

Putin has consistently defended Kadyrov.  On Jan 25, for example, he said that his is protégé works “effectively”.  In March 2015, Putin gave him a state honour just days after Kadyrov had defended one of the people named as a suspect in the gunning down outside the Kremlin of Putin’s fiercest critic Boris Nemtsov.

This week it was learned that the Russia FSB has refused to initiate criminal proceedings over Kadyrov’s overt threat against Kasyanov, finding “no illegal activities in them”.

This is at a time when several Russians have been convicted of or even received prison sentences, and been placed on Russia’s list of extremists and terrorists for critical comments on social networks about Russia’s invasion of Crimea or expressing support for Ukraine.

Ilya Yashin, Nemtsov’s friend and associate recently published a report directly calling Ramzan Kadyrov a threat to Russia’s national security.  Akhmed Zakayev, a Chechen separatist leader living in exile, believes that Kadyrov is now so powerful that the Kremlin might have trouble getting rid of him.

If one looks at the number of Kremlin critics killed, imprisoned or forced into exile over recent years, there seems little reason to believe that Kadyrov’s lawlessness is viewed as a problem at all.  Tragically, quite the contrary.