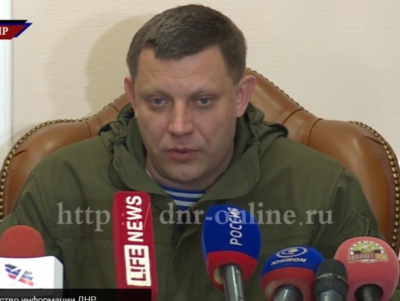 A key Kremlin-backed leader has stated that he has no intention of implementing the Minsk Agreement and holding elections according to Ukrainian legislation.  Western irritation with Ukraine’s supposed failure to come up with a ‘special’ law to enable such elections is therefore unfounded.

“We have insisted and continue to insist that elections in the Republic should be according to international OSCE standards. It suits us and Europe and generally the world community and absolutely comes under the understanding of democratic elections.  It is absolutely unrealistic to hold elections in accordance with Ukrainian legislation and I am categorically against it”.

The Minsk Agreement states clearly that the parties agree to “local elections in accordance with the Ukrainian legislation and the Law of Ukraine “On temporary Order of Local Self-Governance in Particular Districts of Donetsk and Luhansk Oblasts, ” and also about the future of these districts based on the above mentioned law.

It is not clear whether Dzherkalo Tyzhnya’s report last week of behind-the-scenes negotiations to install Donbas ‘republic’ leaders that both Moscow and Kyiv could live with seriously reflected current plans.  It is not, however, in dispute that Ukraine has long been under serious pressure to fulfil the so-called ‘political’ parts of the Minsk Agreement, including a law on local elections.

Before the March 4 ‘Normandy Four’ meeting, German Foreign Minister Frank-Walter Steinmeier and his new French counterpart Jean-Marc Ayrault were reported to be pushing Ukraine to agree to accelerate such elections. Vladimir Socor from the Jamestown Foundation was blunt about such negotiations in which Russia, Germany and France present a common front “from time to time cornering Ukraine”.  He believes that Germany’s Foreign Ministry “systematically avoids identifying Russia as a party to this conflict” and puts pressure on Ukraine to make “compromises”.

All of this suits Russia which has every interest in preventing implementation of the Minsk Agreement while trying to get sanctions removed by transferring the onus of responsibility on to Ukraine.  Russia’s Foreign Minister Sergei Lavrov was reported by the Kremlin-funded RT as being upbeat about consensus with France and Germany about “the sequence of steps that should be taken in order to reach a political settlement in Ukraine”.  He blames Kyiv for the lack of “direct dialogue between Kyiv and Ukraine’s eastern regions”.

It suits those in the EU who want sanctions against Russia lifted to lay the blame on Ukraine which is indeed insisting that Russia withdraw its forces and allow Ukraine to regain control of its side of the Ukrainian – Russian border before elections can be held.

There is also pressure on Ukraine to agree to a near total amnesty for the Kremlin-backed militants with this presented as a prerequisite to enable them to stand for election.  Zakharchenko is on record having admitted that his men razed a village to the ground, while Igor Plotnitsky, leader of the so-called ‘Luhansk people’s republic’ should at very least answer for his role in the abduction of Nadiya Savchenko.

These so-called ‘political decisions’ are, however, not the only impediments to real elections as Zakharchenko has made quite clear.

In January this year, Zakharchenko stated that Ukrainian parties would not be allowed to take part in their local elections.  Given renewed ‘arrests’ of people like 60-year-old academic Ihor Kozlovsky, aid worker Marina Cherenkova (later released and ‘expelled’ from DNR) and people who came to Donbas to help relatives, there would be little likelihood of Ukrainians forced to flee Donbas returning to vote even if they were allowed.

Elections according to Ukrainian legislation means that there must be no media censorship.  As soon as Russian/pro-Russian militants seized control of any area, they cut off all Ukrainian media.  By now the Donbas militants have forced the local Internet provider to block 39 websites, including the main media writing openly about Russian military involvement in the war in Donbas, opposition, etc.

There have also been attacks and harassment of members of the OSCE Monitoring Mission and most western aid organizations have been thrown out.

Strip the verbiage about ‘OSCE standards’ away, and what we have is a total refusal to hold free and fair elections.