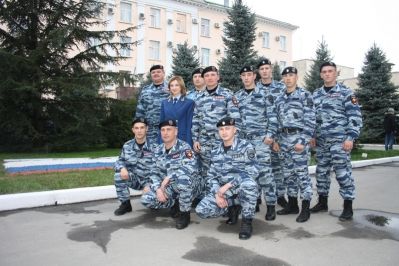 Natalya Poklonskaya, the de facto Crimean prosecutor facing sanctions for her part in Russia’s annexation of Crimea has promised to continue reprisals against Ukrainian nationals who took part in Euromaidan in Kyiv.  Poklonskaya was speaking to former Ukrainian Berkut special force officers who later actively helped Russia seize control of Crimea.  As reward for ignoring their oath to serve Ukraine and collaboration with an occupying nation, the former Berkut officers have been designated the role of ‘injured party’ in prosecutions over which Russian-occupied Crimea has absolutely no jurisdiction.

Poklonskaya was appointed as ‘prosecutor’ soon after Russian soldiers helped Sergei Aksyonov take control in Crimea.  She has taken a leading role in two prosecutions which flout all principles of law, since the defendants have been taken into custody and charged with alleged offences which took place before Russia’s annexation of Crimea with all parties Ukrainian nationals.

The official website has photos of Poklonskaya’s meeting on the eve of the second anniversary of Russian annexation of Crimea with Sergei Kolbin, Vladimir Krashevsky and other officers described as from the Sevastopol and Crimean units of the Berkut OMON [Russian riot police].  She noted the Berkut officers’ “role and significance” in what she terms the ‘Crimean Spring’ and then tells them about the prosecutions, including “the main case” in which 50 of these men are called ‘injured parties’.  She claims that “a number of investigative and operational measures” are underway.  Judging by the first two prosecutions, these ‘measures’ will depend largely on whether former Maidan activists are intrepid enough to appear anywhere on Russian territory.

On Jan 20, 2016, the same website reported that 23-year-old Andriy Kolomiyets had been arrested in Russia and was now charged with attempted murder of two people carrying out official duties, with this supposedly motivated by political or ideological hatred.  Kolomiyets is accused of being “a member of an extremist organization – the Ukrainian Insurgent Army [UPA]” and of making an attempt on the lives of the two Crimean Berkut officers by hurling Molotov cocktails at them.  The charges are likely to result in a long sentence despite their legal absurdity and the sheer impossibility of providing any credible proof (more details here).

Poklonskaya actually boasted of the one prosecution that has resulted in a conviction.  Oleksandr Kostenko is one of the ever-increasing number of Crimeans under Russian occupation whom the renowned Russian Memorial Human Rights Centre has recognized as a political prisoner.

Kostenko is an ex-Crimean police officer who took part in Euromaidan from December 2013.  He was initially arrested by a Russian-occupied Crimean court and charged with an entirely unprovable ‘offence’ in Kyiv on Feb 18, 2014, a month before Russia formally annexed Crimea.  He was supposed to have aimed a cobble stone at V. Poliyenko, an officer of the Crimean Berkut special force unit, with the latter having received a bruise on his shoulder as a result.  Kostenko was alleged to have been motivated by “a feeling of ideological hatred and enmity to law enforcement officers”.

Since the prosecution was unable to prove that the Crimean Berkut officer whom Kostenko was alleged to have slightly hurt had been a Russian national at the time of the supposed offence, it added the charge of ‘”unlawfully obtaining, keeping or carrying the main parts of a firearm” in order to keep Kostenko imprisoned.

The investigators claimed to have found a cut off rifle barrel when searching his home, although not one of the official witnesses of the search confirmed that weapons had been found in Kostenko’s flat.  The investigators alleged that Kostenko’s father, Fedir Kostenko had identified the gun barrel as belonging to his son.  They also claimed however, that it was Kostenko Senior who gave permission for the search.  Fedir Kostenko disappeared shortly after this and has not been seen since.

Kostenko was initially sentenced to 4 years 2 months imprisonment, as demanded by Poklonskaya who personally ran the prosecution’s case.

Two appeals have reduced the sentence to 3 years, 6 months, though the surreal charges have not been questioned.  There has been consistent refusal to investigate the very considerable evidence backing Kostenko’s allegations of torture, especially during the day which transpired between his actual detention and the day written on the official protocol.  This includes a broken arm and multiple other injuries. For more details and an address for writing to Oleksandr, see:  Torture and Legal Thuggery against Maidan Activist