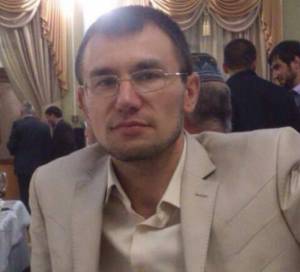 Eight Crimean Muslims, including a prominent human rights activist, are in detention in Russian-occupied Crimea and facing long prison sentences for fictitious ’terrorism’ based solely on claims that they are members of a peaceful organization which is banned in Russia, but not in Ukraine

Catching terrorists is normally a difficult, but vital task.  Except in Russia and, tragically, now Russian-occupied Crimea where a questionable Russian Supreme Court ruling and a secret ‘witness’ can get Muslims convicted of ‘terrorism’ and sentenced to 15 years or more.  No need to prove that a person did anything, or was even planning to carry out an act of terrorism.

Four Crimean Muslims are about to go on trial after a year in detention and four others, including a prominent human rights activist, are in detention.  All are charged under Russian law with ‘terrorism’, over alleged involvement in the Hizb ut-Tahrir pan-Islamic organization.

The four arrests this February were accompanied by armed searches of a large number of Muslim homes throughout Russian-occupied Crimea.  The searches, during which doors were broken down for no reason and children woke up to find men with machine guns over them, suggests that these prosecutions are part of the methods used to intimidate or drive away Muslims, most of whom are Crimean Tatars.

They are also, unfortunately, an ‘easy’ means to promotion or bonuses for those involved in the arrests and prosecution.  The organization Hizb ut-Tahrir is labelled ‘terrorist’ in Russia (and Russian-occupied Crimea), and that is considered enough.  There is no problem with proving involvement in the organization, since Russian legislation allows a secret witness to provide that by testifying that the defendant tried to recruit them into the organization.  Once a person has been arrested, the road to a long sentence is tragically unencumbered by any of the normal requirements of a justice system.  Given the lack of any justification provided, the Russian Memorial Human Rights Centre recognizes all those convicted of ‘terrorism’ for membership of Hizb ut-Tahrir to be political prisoners.

The organization is banned only in Russia, Uzbekistan and some Arab countries.  Memorial expert Vitaly Ponomaryov explains that in Russia, it was declared a ‘terrorist organization’ in a 2003 Supreme Court ruling.  The ruling was not made available for over a year making it impossible for Memorial to lodge an appeal.  No grounds were provided for the decision to criminalize the organization.  There is just a half a page in which the court writes that the organization calls for the creation of Khalifat, carries out active propaganda, and is banned in Uzbekistan and some Arab countries.   The mention here of Uzbekistan is no accident.  In another interview, Ponomaryov actually suggested that the organization might have been criminalized in order to make extradition to Uzbekistan easier.  The latter was hunting even moderate Muslims as enemies of the notorious Karimov regime, and the collaboration between Uzbek and Russian security services kept attracting unwanted publicity. The European Court of Human Rights has on many occasions applied Rule 39 stopping extradition to Uzbekistan because of the near certainty that the person will be subjected to torture and the very dubious grounds for prosecution..

There is not one case, Ponomaryov stresses, where any members of Hizb ut-Tahrir have been implicated in actual organization of terrorist acts.  Yet conviction and imprisonment is effectively guaranteed.  Legislation in 2012 increased the sentences which are now often over 15 years.  The scale of arrests is also greater, with there being a number of cases where 20-25 people have been arrested.

Hizb ut-Tahrir is not banned in Ukraine and the organization existed openly until Russia’s invasion of Crimea.  There was some degree of distrust of any transnational Islamic movement and conflict between different Muslim movements, but no more  Veteran Crimean Tatar leader Mustafa Dzhemiliev recently said that he doesn’t like Hizb-ut-Tahrir which he sees as dividing Muslims into the right and wrong kind, but that there is nothing ‘extremist’ or ‘terrorist’ about them.

There have been flagrant infringements of all the detained men’s rights, and efforts to prevent them having proper defence.  Emil Kurbedinov, for example, has twice now been permitted only to represent one of the defendants, and there have been overt attempts to intimidate anybody appearing at court detention hearings.  Four men are shortly to go on trial in the same Rostov military court which in August 2015 sentenced Crimean filmmaker and political prisoner Oleg Sentsov to 20 years imprisonment and civic activist Oleksandr Kolchenko to 10 years.  Both were accused of non-existent and unproven ‘terrorism’.

The Sentsov – Kolchenko trial was overtly political, but the lack of any evidence was at least demonstrated at each hearing.  Nuri Primov; Ferat Saifullayev; Rustem Vaitov; and Ruslan Zeitullayev are also political prisoners yet could be sentenced to long terms of imprisonment without having had any chance of consular support and sufficient defence.

Four other men are now in custody and complain of appalling conditions, with cockroaches and bedbugs in the overcrowded remand prison, and no contact with their families.

It is unfortunately likely that 27-year-old Vadim Siruk, a convert to Islam whose wife is expecting their second child, was arrested for the statistics.  He makes it possible for Russia, via the de facto prosecutor Natalya Poklonskaya, to claim, albeit with little credibility, that the arrests are not targeting Crimean Tatars.

Siruk was detained, together with Emir-Huseyn Kuku; Enver Bekirov and Muslim Aliev on Feb 11.  All four men are Muslims, but it is not at all clear that they belong to Hizb ut-Tahrir.

Emir-Huseyn Kuku is the son of a veteran of the Crimean Tatar national movement and a member of the Crimean Contact Group on Human Rights, monitoring the human rights situation in the Yalta region.  He has faced constant harassment since Russia’s annexation, though never over Hizb ut-Tahrir.   Kuku has two children – a son who is just 9, and a 4-year-old daughter.

Muslim Aliev has four children, two of them with heart conditions.  Aliev in fact became a practising Muslim when his daughter fell gravely ill.  He is the only breadwinner in the family, and has been working at several jobs to pay for the medical treatment needed.

Under Russian occupation, an arbitrary and unexplained Russian Supreme Court ruling is providing a fast-track means of getting easy ‘terrorism convictions’ and terrorising Muslims with chilling disregard for the lives being destroyed.