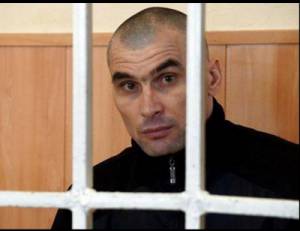 Another trial directly linked with Russia’s undeclared war against Ukraine is continuing just around the corner from Russian Donetsk, where the ‘trial’ of Nadiya Savchenko reached its predetermined end on March 22.  Serhiy Lytvynov has also been in Russian custody for almost two years and is now facing absurd charges.  So absurd that they could do with publicity, and the defendant with moral support.  At the moment, there is nobody, save his lawyer, Viktor Parshutkin.

The latest hearing took place on March 22 in Tarasovka, Russia on the robbery charges which Russia’s Investigative Committee came up with after being forced to abandon a war crimes indictment based solely on lurid ’confessions’.

Litvinov, a 33-year-old cowherd with learning difficulties, had the misfortune to cross the border into Russia in August 2014 over an inflamed tooth, and has been in custody ever since.  His village is close to the border and until 2014 it was entirely safe to seek hospital treatment in Russia.  This time, however, he was seized while recuperating and savagely tortured, until he confessed to multiple war crimes which he was supposed to have committed as a member of the Dnipro volunteer battalion.

The Investigative Committee’s announcement of the charges against Litvinov, on Oct 1 2014 followed claims from the same IC that Ukraine was committing ‘genocide against the Russian-speaking population in Donbas”.  This was reiterated in the report on Litvinov’s arrest, with Vladimir Markin claiming that Ukraine was trying to kill the population of Donbas, with the victims’ fault allegedly lying “merely in the fact that they spoke Russian and did not want to descend into nationalist hysteria and allow fascist ideology in their native land”.  “The character and style of the murders carried out by the National Guard and Right Sector resemble other similar crimes which the Dnipro Battalion Private Serhiy Litvinov describes in detail in his testimony.”  Litvinov had ‘confessed’ under torture to personally carrying out murders of civilians, including women and children on the basis solely of anonymous denunciations.

The lack of anything but ‘confessions’ has not hampered Russian courts in the cases of other Ukrainian hostages, including Stanislav Klykh and Mykola Karpyuk now on trial in Chechnya.  This time, however, his defence, Viktor Parshutkin, succeeded in proving that the alleged ‘war crimes’ had never taken place and the supposed ‘victims’ and their addresses were fictitious.

In any real court the robbery charges would face the same fate.  The alleged victim is Roman Lysenko, a Russian national, who claims that he was beaten up and two cars stolen while in the Luhansk oblast of Ukraine.   This alleged crime was only reported a full year after the supposed event.  It is claimed to have been carried out  “on one of the days between 29 June and 2 July 2014 by Lytvynov together with an unidentified accomplice”.  The prosecution claims that, armed with a machine gun, they burst into a house, beat up Lysenko and stole two cars.

Parshutkin writes that had Ukrainians been at the hearing on Tuesday, just a few kilometres from Savchenko’s trial, they would have learned all sorts of curious things.  The alleged ‘aggrieved party’ Lysenko was facing questioning.  He claimed that in Ukraine there is no such thing as a technical passport for cars.  Parshutkin’s understanding of the situation seems spot on: if Lysenko has no proof that he owned the car that he alleged, a year later, was stolen, then it’s because there are no such documents.

Lysenko, a Russian national, also claimed that only the Russian border guards had asked to see his passport, not the Ukrainian ones.  Asked by the defence why the latter had not, Lysenko claimed that they were all his friends, and just let him through.

The next hearing is due on March 23 and deserves attention.