Cynical Farce Though It Is, Nadiya Savchenko Must Appeal 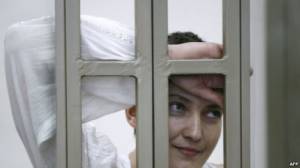 A legal trial that is run according to a prewritten script is no trial, and no justice. Nor can there be any real appeal against the 22-year sentence passed on Ukrainian former military pilot and MP Nadiya Savchenko on March 22. But by rejecting the appeal procedure, Savchenko is making a grave mistake because it removes the possibility of applying to the European Court of Human Rights, which requires that all legal remedies be tried, however doomed.

The appeal will be rejected as insultingly quickly as that lodged by Crimean political prisoners Oleg Sentsov and Oleksandr Kolchenko who were sentenced to 20 and 10 years, respectively, on charges of non-existent ‘terrorism’. Their trials were condemned as ‘Stalinist’ as ‘ideological terror’ and the men’s release has been repeatedly demanded by the same democratic countries and international structures who have already on countless occasions demanded Savchenko’s release.

Sentsov and Kolchenko remain imprisoned, together with two other opponents of Russia’s annexation arrested in May 2014 - Gennady Afanasyev and Oleksy Chirniy.

None of them expected justice from a Russian court, and they were not wrong.  Sentsov and Kolchenko can almost be considered ‘luckier’ since at least their release continues to be demanded and their treatment closely observed. 73-year-old Ukrainian pensioner Yury Soloshenko, Valentin Vyhivsky and Viktor Shur are all serving absurd sentences, victims of Russia’s hybrid war against Ukraine, and they are almost forgotten. Three others held in Russia  – Stanislav Klykh and Mykola Karpyuk in one case,  and Serhiy Lytvynov in another, are still on trial.

The situation with political prisoners from Crimea – both those already convicted and those facing long sentences – is even worse. Russia’s effective information blockade, and probably western reluctance to do more than simply register deep concern, mean that at the very least 14 Ukrainian nationals, most of them Crimean Tatars, are facing long sentences on legally grotesque or simply trumped up charges. These include:

Nadiya Savchenko’s case has been in the limelight. Russia can feed lies to the majority of its population who receive their information via state-controlled media that she was responsible for the death of two Russian journalists.

The Parliamentary Assembly of the Council of Europe, the European Parliament, EU, OSCE and all democratic countries, all human rights organizations and the international media know that she is a political prisoner.

It is no small thing to gain international attention and Nadiya should not stop now.

She should not stop for her own sake, since she is needed to Ukraine alive, and it is senseless to expect either justice or mercy from the Kremlin’s leaders. She has said that she will begin a dry hunger strike once the sentence comes into force (within 10 days if she does not appeal).

She should not stop for the sake of all those Ukrainians in Russian detention or held in Russian-occupied Crimea. Her case has made the-farce-which-is-Russian-justice clear to the world and the appeal can only help to keep this in the public eye.