Ukraine’s Prosecutor General shelves vital Odesa 2 May investigation‘Clear Signs of Sabotage’ in Odesa 2 May Investigation"US guilty of genocide": Kremlin supports anti-Maidan festival with links to the German far rightOdesa 2 May Suspect: We were financed by MoscowVital Probe of Odesa May 2 Tragedy stymied because of questions answered?Movement at last on Odesa 2 May investigationRussia Today, or why Odesa May 2 is different from BaltimoreOdesa May 2 Investigation: A Failed Test for Ukrainian JusticeMore Evidence against Incendiary Lies about Odesa 2 MayContinuing Obstruction of Odessa May 2 InvestigationPropaganda that KillsOdessa May 2 trial turns into farce as Russia continues ‘massacre’ propagandaBad Start to Crucial Odessa May 2 TrialsRussia’s New Odessa FileOdesa "Massacre" Propaganda vs. the FactsDangerous silence over police role in Odessa May 2 eventsWithout Double StandardsWhat Russian TV won’t show about the events in OdessaCVU: Pro-Russian activists sold information about pro-Ukrainian activists in OdessaUHHRU condemns police role in Odessa tragedy
• Topics / The right to life

Sabotage or Corruption? Crucial suspect in Odesa May 2 tragedy allowed to escape 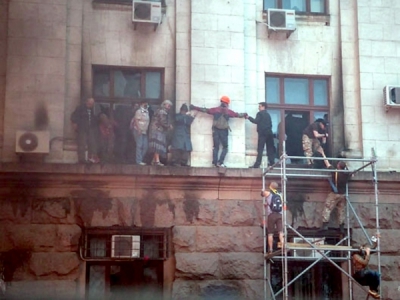 Volodymyr Bodelan, head of the emergency services during the disturbances and tragic fire in Odesa on May 2, 2014, is facing charges over the fatal role he played that day. Any impulse to celebrate a long-overdue breakthrough should be curbed, however, since Bodelan needs to be found first.  An inquiry is also needed into how this happened since there was no reason for not arresting him at the same time as three of his former subordinates.  Quite the contrary since it was Bodelan who issued the order stopping fire engines from being sent.

The moves with respect to the emergency services officials come as the second anniversary approaches of the May 2 disturbances and fire in which 48 people were killed.  Ukraine’s authorities have demonstrated an almost total failure to carry out an effective investigation, and the fact that Bodelan has fled is profoundly frustrating.

Bodelan’s role has long been established, and is outlined in the Council of Europe’s International Advisory Panel report together with the assertions he make to explain his behaviour and their rejection by the 2 May Group, a civic initiative which has investigated the events.

6 people were killed by gunshot fire during disturbances in the centre of Odesa on May 2, 2014.  The disturbances arose from a deliberate attack by a large crowd of pro-Russian activists from the Odesskaya Druzhyna, however weapons were later used by both sides.  42 people, all pro-Russian activists died as the result of a fire in the Trade Union Building on Kulikovo Pole.

Russia and its supporters have consistently distorted the events that day and pushed a false narrative about a supposed ‘massacre’ by ‘Ukrainian radicals’.  The selective and manipulative use of video footage used in all Kremlin-funded propaganda was unfortunately repeated recently in a film by French film director Paul Moreira ‘Masks of the Revolution’, broadcast on Canal +.

Moreira, like Russian and pro-Russian media ignored all the findings from the 2 May Group (see their video ) and the International Advisory Panel.  These are highly critical of the inept investigation, but also totally debunk the propaganda narrative which claims that the pro-Russian activists were driven into the building which was then set alight.

The expert investigations have all confirmed that there is no knowing whether the fire was caused by a Molotov cocktail thrown into the building by pro-unity activists, or thrown from inside by the pro-Russian side (see More Evidence against Incendiary Lies about Odesa 2 May.

It is quite clear that there would have been far fewer deaths had firefighters not taken over 40 minutes to arrive despite numerous calls.  The International Advisory Panel’s report in November 2015 was damning on this subject, calling the failure to properly investigate how this had happened “the most striking example of a lack of diligence”.  The fact that the investigation had been left to the Interior Ministry was particularly criticized given the structural links between it and the emergency services.”.

Three emergency services officials were charged at the end of February 2016 under Article 135 § 3 of the Criminal Code (leaving people in danger).  The charges carry a sentence of between 3 and 8 years.  Viktor Hubai, deputy head of the Emergency Services Regional Department was remanded in custody, while the head of the shift Yury Shvydenko and assistant Svitlana Koyeva were placed under house arrest.  It is Koyeva’s voice that can be heard on the tape ignoring the calls for help.

He has repeatedly claimed that a fire crew was sent but that it was obstructed by aggressive protestors and that time was lost in negotiations to agree a safe corridor.  The 2 May Group has found no evidence to confirm this, and the video footage shows a very different picture. In fact, even his former subordinates have now given testimony which totally refutes that version.

The 2 May Group reported, on Bodelan’s first return to the country that he appeared to have his reasons for believing himself to be immune from prosecution.  It was totally predictable that he would leave the country again once his ex-subordinates were arrested.  An enquiry into who helped him to flee the country is vital, both because of the importance of the investigation itself, and because of the dangerous lies Bodelan is once again spreading to try to justify his failure to send fire engines when people’s lives were in danger.