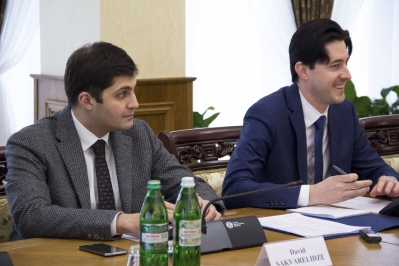 Relief that Viktor Shokin has finally been removed from his post as Prosecutor General was tempered on Tuesday by a final blow against the reform camp through the dismissal of David Sakvarelidze and criminal charges against his former colleague Vitaly Kasko, with concern mounting that Shokin’s successor may only differ in passport details

The crucial and long-overdue vote in parliament came just hours after Shokin dismissed Sakvarelidze, the last remaining reform-minded Deputy Prosecutor General.  And a day after fellow reformer Vitaly Kasko’s flat in Kyiv was frozen as part of criminal proceedings initiated just before Kasko resigned from his analogous post in February.  It was also announced on Tuesday that one of the prosecutors whom Sakvarelidze appointed in Odesa, Aleksandr Modebadze had been arrested and charged over alleged bribe-taking.

President Petro Poroshenko was reported to have specially asked for a meeting with Sakvarelidze and told him that the dismissal had not been agreed in advance with him.  Sakvarelidze himself says that Poroshenko had just a few days ago asked him if he would like to resign, making it difficult to believe that the President was unaware of Shokin’s plans.

Sakvarelidze has played a major role in corruption cases, including that of the so-called ‘diamond prosecutors’, Volodymyr Shapakin and Shokin’s friend Oleksandr Korniyets.   He has come into conflict both with Shokin, and with Yury Sevruk, current acting Prosecutor General and Yury Stolyarchuk, another deputy.  Both men are seen as close to Shokin, and both are being discussed as likely candidates for the main post.

Vitaly Shabunin, head of the Anti-Corruption Action Centre [AntAC] which has frequently criticized both Sevruk and Stolyarchuk, believes that President Petro Poroshenko is currently considering two options.  One would be to leave Sevruk as indefinitely acting Prosecutor General.  The other would be to make Stolyarchuk the head, and Sevruk his first deputy.  That, he says, would be “a reincarnation of Shokin with other faces”.

As reported, the Prosecutor General’s Office last week obtained two court orders allowing them to remove documents and other items from AntAC, and to demand access to confidential information from the NGO’s bank.  The claim was that this was part of an investigation into the disappearance of money given by the USA for reform of the prosecutor’s office.  Shabunin condemned the move as overt pressure on the NGO which had never had any contact with that money, as Shokin knew very well.  They had, however  strongly criticised the work of both Sevruk and Stolyarchuk.

It was Vladislav Kutsenko from the PGO who first reported the investigation into the missing funds which for some reason targeted an anti-corruption NGO, though the claim to fame here lies with Stolyarchuk who told Ukrainska Pravda that he could not exclude the possibility that the US Ambassador Geoffrey Pyatt would be summoned for questioning.

Kutsenko was not to be outshone.  On Tuesday he announced that Modebadze had been detained, allegedly while receiving a bribe.  Just to raise public confidence that this had nothing to do with Sakvarelidze’s dismissal, Kutsenko added that “this is the daily work of the prosecutor’s office, the military prosecutor, the Prosecutor General’s Office. And it’s not one “diamond prosecutors” came which is all unfortunately that David can boast of talking about how he’s working for new Ukraine”.

The order dismissing Sakvarelidze speaks of “flagrant infringement of prosecutor ethics” which was presumably linked with his involvement in a protest outside the Prosecutor General’s Office and had supposedly breached ethical principles.

It also mentions several collective MPs’ appeals and a court suit brought by an MP.  It does not mention another suit brought by Korniyets, one of the two ‘diamond prosecutors’.

It is their prosecution which Sakvarelidze has repeatedly alleged was being blocked. One letter from Odesa MPs has been reported.  The signatories include Serhiy Kivalov, who played an active role in the worst judicial distortions under Viktor Yanukovych and  others who, according to MP and investigative journalist Serhiy Leschchenko, should themselves “be Prosecutor General’s Office clients”.

A criminal investigation against Kasko was initiated on Feb 12, 2016, three days before Kasko resigned from his post as Deputy Prosecutor General saying that he did not wish to be part of a body where “total lawlessness is tolerated”.   Under the present leadership of the Prosecutor General’s Office, he added, he saw no possibility, of creating a European-style prosecutor’s office able and willing to effectively investigate corruption and other cases.

Kasko was viewed, like Sakvarelidze, as a key reformer and his resignation was widely regretted and only fuelled calls for Shokin’s removal.

On March 28, a flat in Kyiv which is the subject of the criminal investigation was frozen.  Kasko writes that he learned of this from the media and he directly accuses Shokin of carrying out a reprisal attack on him.   Perhaps coincidentally, the court order was issued on exactly the same day and by the same Pechersk Court as those allowing the search and removal of material from the Anti-Corruption Action Centre.

The watchdog Nashi Hroshi [Our Money] has outlined the property relations in question here. It also points to the counter-accusations of corruption made by Kasko.

In a blog on Tuesday, Kasko rejects the charges and points out that he underwent a lustration check in 2015 which included a check on whether property had been lawfully obtained.  This, he says, was signed by Shokin who has now personally dealt with the writ on the flat.  Kasko names a whole range of actions linked to this which he says shows that this is an act of revenge.

It is not our place to judge the merits of any charges.  It is, however, true that both Kasko and Sakvarelidze were widely seen as promoting vitally needed reforms in the prosecutor’s office and were constantly under fire for this.  Civic activists have called for public discussion of the choice for a new Prosecutor General.  They fear, and with reason, that without open competition, the fourth prosecutor general since EuroMaidan will prove as unwilling to carry out reform and as short on any progress as his or her predecessors.