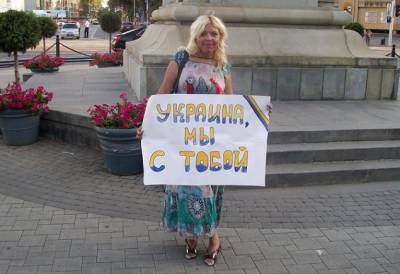 The placard reads "Ukraine, we’re with you"

While Ramzan Kadyrov’s open threats against peaceful opponents of the Kremlin get him Putin’s approval and continued leadership of Chechnya, Darya Polyudova is to serve 2 years for criticism of Russia’s war against Ukraine and an attempt to hold a peaceful ‘federalization march’

A Krasnodar court has upheld the 2-year sentence against civic activist Darya Polyudova over supposed ‘calls to extremism and separatism’.   Polyudova has been active in her opposition to Russia’s undeclared war against Ukraine and in support of Oleg Sentsov, Oleksandr Kolchenko and Russia’s other Ukrainian political prisoners.  The prison sentence is, however, the final repressive consequence of civic attempts to hold peaceful ‘federalization marches’ in Russia.  They coincided with Russia’s arming and manning a supposed separatist uprising in Ukraine and aggressive demands for Ukrainian federalization.

26-year-old Darya Polyudova was convicted on Dec 21, 2015 of ‘public calls to extremism and separatism, including via the Internet’.  She was sentenced to 2 years minimum security prison colony and also banned from teaching or work in the media.

Polyudova was arrested on Aug 15, 2014, two days before the banned march was supposed to have taken place.  She had been approached by an obvious provocateur, then jailed for 14 days for what the court decided to consider ‘petty hooliganism’.  She was never released even though criminal proceedings were only initiated on Sept 15.  These, it transpired, were for no less than alleged public calls to actions aimed at violating Russia’s territorial integrity (Article 280.1 of the Criminal Code).  She was released from custody after 6 months, purely because of a legal requirement in the Criminal Procedure Code.

Polyudova was recognized as a political prisoner by the Memorial Human Rights Centre back in October 2014.

After her release, she told Radio Svoboda that the investigators had not been able to find anything to lay on her in the material prepared about the march, so they came up with three ‘episodes’ (or possibly more, since reports vary as to the charges).

Polyudova was deemed to have made ‘public calls to separatism or extremism’ [Article 280 § 1 of the Criminal Code] in connection with the banner she held up during a single-person picket on April 4, 2014.  This read “No war against Ukraine, but revolution in Russia! No war, but revolution”!  She then circulated a picture of herself with the banner on VKontakte.  .

The investigators decided that comments in which Polyudova laid responsibility for all terrorist acts and misfortunes on Putin, and asked why if Maidan could get rid of Yanukovych, they couldn’t come out onto the streets and overthrow the regime were ‘extremist’.

There was never any suggestion of violent overthrowing of the regime, etc.  The same accusations against Putin were made by Alexander Litvinenko, the former FSB agent who was murdered with radioactive polonium in November 2006 in London.  A UK inquiry found in January 2016 that the head of the FSB and Putin had almost certainly been involved in this murder.  They were also made by Boris Nemtsov, gunned down near the Kremlin in February 2015 and very many others.

Although a number of Russians have received prison sentences for blogs and posts on social networks, in Polyudova’s case, they do appear to have been prompted by her attempts to hold the ‘federalization march’.  This is demonstrated in the fact that she and two other Krasnodar activists involved in the march were soon afterwards placed on Russia’s Federal List of Terrorists and Extremists.  The other two fled to Ukraine to escape persecution (see: Federalization as a Terrorist Act) .

Worth recalling that the leader of Chechnya Ramzan Kadyrov has not just contented himself over recent months with threats in the media that those he calls “enemies and traitors of Russia” will be punished.  He even posted an Intstagram photo showing opposition politician and Kremlin critic Mikhail Kasyanov under a sniper’s vision.  The video was removed by Instagram, not the Kremlin, and Putin last week again confirmed Kadyrov’s continued leadership of the Russian Federation republic.