Ukrainian Library director could get 10 years on new Russian charges 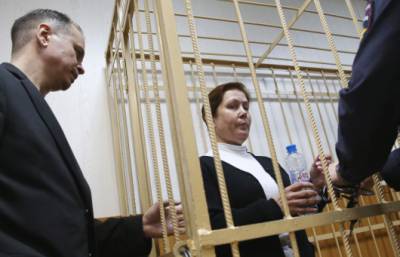 With the original ‘extremism’ and ‘incitement’ charges against Natalya Sharina, Director of the Ukrainian Literature Library in Moscow, proving just too sloppy and absurd, Russian investigators have come up with a new indictment.  As her lawyer Ivan Pavlov puts it, once they’ve grabbed a person, a pretext will be found.  One, unfortunately, that could bring a 10-year prison sentence.

Sharina’s lawyers have been called to the Investigative Committee on April 5, and expect charges to be laid on two counts of alleged ‘appropriation or squandering’ under Article 160 (§ 3 & 4) of the Russian criminal code. Typically, the pro-Kremlin TV channel LifeNews has already reported details of these new charges.  Citing the investigators, the channel says that there are two episodes involving Sharina’s alleged “unwarranted payment of lawyers’ services from state funds and fictitious employment of two legal consultants.”  It is claimed that from 2011 to 2013 this involved the spending of over 1 million 400 thousand roubles.

For the director of a library, the charges and the amount named are mind-boggling,  but then, so were the previous ones.  Pavlov says that the position taken by the investigators is familiar.  The original charges are clearly falling apart at the seams, and they need to come up with something urgently.  Or drop the whole shameful prosecution, but that, unfortunately, is not something Russia’s very politicized Investigative Committee does as the case of Ukrainian Serhiy Lytvynov has demonstrated.

Natalya Sharina has been under house arrest since late October 2015.  It was thanks to her lawyers Pavlov and Yevgeny Smirnov that the original attempts to hold her in detention were unsuccessful.

The following day Russia’s Investigative Committee reported that the 58-year-old librarian was accused of ‘inciting national enmity or hatred, and also denigrating human dignity” (Article 282 § 2b of the Russian Criminal Code) with those charges carrying up to 5 years.  The Investigative Committee asserted that from 2011-2015, Sharina, as Director of the Ukrainian Literature Library, “circulated among visitors books by Dmytro Korchynsky designated by the court as extremist material and prohibited for use”.

In its statement declaring Sharina a political prisoner, the Memorial Human Rights Centre pointed out that Korchynsky himself had on many occasions addressed a pro-Kremlin youth camp in the Moscow region during the 2000s.  He and his ‘Bratstvo’ organization are fairly notorious in Ukraine as provocateurs, and are suspected, with cause, of having been used to provoke police backlash in the recent past.

Only one book by Korchynsky is on Russia’s substantial list of ‘extremist’ materials, so the Investigative Committee’s mention of ‘books’ is already manipulative.

“The criminal proceedings against Natalya Sharina have taken place against the background of the anti-Ukrainian campaign continuing since Spring 2014 in the state-run media and in utterances made by public officials holding high posts in the Russian Federation’s leadership.  One of the parts of this campaign is to initiate criminal cases against citizens publicly expressing a position on what is happening in Ukraine that differs from the official position or in any way linked with Ukraine. In our opinion, it is specifically in the light of this anti-Ukrainian campaign that the case of Natalya Sharina should be viewed, ” Memorial said.

It called criminal prosecution of the director of a library over material (allegedly) held in the library and deemed extremist as new repressive practice.

Memorial and all other human rights groups will surely be just as unconvinced by these new charges.