Not jailed for ripping up portrait of Poroshenko! 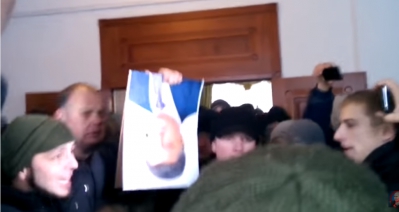 Carl Bildt recently compared reaction to the Panama Papers in Ukraine and Russia, calling it the difference between an open and a controlled society.  Ukraine is certainly open. So much so that the most incredible nonsense can be reported and taken seriously.  26-year-old Yury Pavlenko [‘Khort’] was indeed sentenced by the Vinnytsa City Court to 4.5 years in prison on April 2, 2016, but not because he ripped up a portrait of Ukrainian President Petro Poroshenko.

The fact that he, his lawyer and other supporters from various far-right groups all shouted in chorus that he was being persecuted for the portrait did not make it true.

The very fact that it was mainly the pro-Kremlin media who were circulating the information could have aroused some suspicion.

One would forlornly hope that the lack of any concern expressed by Ukrainian human rights organizations might also have suggested an alternative point of view.

Pavlenko is the far-right leader of an organization called ‘People’s Tribunal’ and took an active part in the events on Dec 6, 2014, when around 200 people stormed the Vinnytsa city administration.

The apparent reason was a plan by most of the regional council’s deputies to dismiss the head of the council, Serhiy Svitko, who had been installed by the local Maidan in February that year.  Although the majority in the council was held by members of the former ruling party, it seems that representatives of other parties also wanted him out.

A few hundred people came out in opposition to this, with the protest probably initiated by the far-right VO Svoboda party and Lyashko’s Radical party.  Some of the people present, prompted by, among others, Pavlenko, broke through a police cordon and burst into the building, and some of the offices.

The first problem with the narrative about a political prisoner jailed for ripping up a portrait of the President is that Pavlenko was not the only person to have destroyed such a portrait.  See, for example, around 0.48 in the video here.  The video with Pavlenko in the Governor’s office is much better quality and possibly came from Russian journalists present.  It was certainly shown widely in Russia which is hardly surprising since Pavlenko does not just rip up the portrait (from about 0.50), but also prompts the others to chant that Poroshenko is a ‘dickhead’.  This was perfect for the pro-Kremlin media as an antidote to similar chants often heard about Russian President Vladimir Putin.

Investigative journalist Anton Bulgakov suggests that it wasn’t the ripped portrait of Poroshenko that prompted the attempts to turn an ordinary hooligan into a political prisoner, but the fact that the Russian media were there to film it all and decided to cast him in persecuted hero mould.

The police made two arrests – of Pavlenko and of an activist from Yulia Tymoshenko’s Batkivshchyna Party, Yanuariy Shostak.  The latter was apparently wrenched from police custody by some supporters, and then went into hiding.  Bulgakov is rather sceptical about the degree to which Shostak is genuinely in hiding, but in one way or another he has thus far escaped prosecution.

The police responded to the claims that Pavlenko had been arrested for the portrait on Dec 10.  They stated that the charges were of hooliganism, seizure of a state or public building and threats or violence against a police officer.  They stressed that there was no question of any penalty for the damaging of the portrait and stated that such speculation was being used to avoid liability for hooligan behaviour.  They have repeatedly pointed out that there is no such thing as desecration of the portrait of the President since the latter is not a state symbol.

In the end Pavlenko was convicted of hooliganism with the use of weapons (a gas canister, a baton seized from the police and some explosive substances).

Whether or not the charges were proven in court is not for us to decide.  It is certainly a steep sentence when there does not appear to be direct evidence that he himself hurt anybody.. According to the official report, 8 police officers were injured, and 5 activists, and the videos available, both of the events outside the administration and in the building, do seem to demonstrate a dangerous level of violence.  In the video here, for example, Shostak and another person can be seen throwing a smoke flare at police officers.  Here Shostak sprays a gas canister at police officers’ faces.  Pavlenko can be seen throughout (here, for example) taking a prominent role in the proceedings.  There may well also be  other video footage which was available to the court..

Others were not prosecuted, and that does force greater scrutiny.  Bulgakov dismisses the suggestion that it was all linked with the portrait and believes that Pavlenko was in fact set up by his comrades who first made him the scapegoat, and then turned him into a political prisoner.

Whether the evidence warranted the conviction - and the harsh sentence - will shortly be considered by the court of appeal, and closely followed.  .

Pavlenko was also a very well-known figure in Vinnytsa and beyond for his neo-Nazi,  anti-Semitic and xenophobic views.  He had received a three-year suspended restricted liberty sentence in Dec 2013 on a charge of inciting enmity during a protest raid he lead against foreign students.  That sentence was revoked in March 2014 with the Vinnytsa Court of Appeal rather curiously choosing to believe that Pavlenko had not known one of the offensive terms he used, and that another was acceptable since Taras Shevchenko (who died over 150 years ago) had used it.

According to Bulgakov, Pavlenko remained in custody largely because of the quality of his ‘lawyers’, who are comrades in arms.  He comments that with lawyers like that, a prosecutor is not needed.

It is possible that Pavlenko liked the role of hero and political prisoner.  There was discussion soon after his arrest about “whether he is a hero or a provocateur”.   Certainly in this situation, he and his supposed patriot comrades have done Ukraine only a disservice, chanting in unison with the Russian media what Bulgakov refers to as “an insane mantra” about a prison term for destroying a portrait of the President.