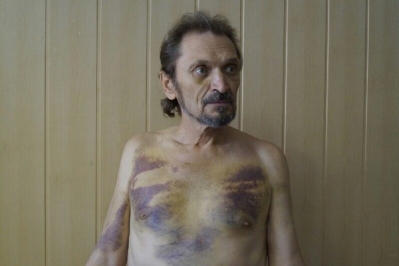 Father Aleksander was one of the active members of the Donetsk prayer marathon in 2014 during which believers of all faiths gathered in the centre of Donetsk to pray for Ukraine and for peace. The marathon continued for 158 days, although it became more and more dangerous with each day.  Pastor Aleksander was not the only participant to be abducted, nor the only representative of different faiths in Donbas to be tortured or murdered.  Then and now it is only Orthodox churches under the Moscow Patriarchate that have remained free of persecution since the beginning of the Kremlin-funded and manned conflict in Donbas.

Aleksander Khomchenko is one of three Ukrainians who took part in a conference on April 5 at the European Parliament in Brussels.  The conference presented a Polish report entitled ‘Russian war crimes in Eastern Ukraine in 2014’ and a report by Ukrainian rights activists ’28 Hostages of the Kremlin’.

Yury Yatsenko, and his friend Bohdan Yarichevsky are the only two Ukrainians taken prisoner in Russia during 2014 who have been released (details here).  The shocking treatment of Iryna Dovhan is more widely known because of the photos of her, wrapped in a Ukrainian flag with a sign ‘she kills our children’, being attacked by militant supporters at a Donetsk intersection.

Aleksander Khomchenko’s abduction was reported at the time, but the problem was always in obtaining information, unfortunately even after people were released.  In an interview given to the newspaper Fakty, Khomchenko himself says that he doesn’t understand why a Polish investigative team (of former policemen) took such interest in clear evidence of torture and other war crimes, while the Ukrainian Security Service confined themselves to obtaining details about the names or nicknames of his torturers.  The Polish report is intended to provide vital evidence of war crimes for the International Criminal Court in the Hague.

Khomchenko was Pastor at the ‘Word of Life’ Church in Donetsk, and many of his parishioners took part in the Prayer Marathon on Constitution Square.  Members of all faiths gathered each evening for a joint service, with only priests from the Moscow Patriarchate not taking part. .

At the beginning there were as many as 300 people, but the number of armed militants in the city was rising all the time, the prayer tent had been attacked four times, and people were understandably afraid.  A number of priests and pastors were abducted during those months, and Father Aleksander says that you could get killed just for wearing a ribbon in the colours of the Ukrainian flag on your clothes.

During the day, Khomchenko and other pastors like Sergey Kosyak helped evacuate families with small or unwell children.  He was seized by militants from the so-called ‘Donetsk people’s republic’ [DNR] on August 4, 2014. 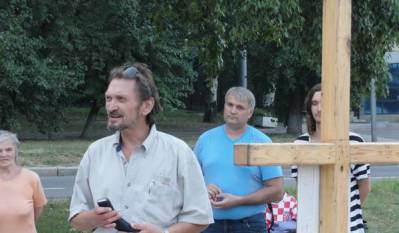 He had bought flowers and chocolates for two of his parishioners who had birthdays that day.  “You understand, at that time in Donetsk I lived each day as that it was my last, and rejoiced in anything good that was happening. We prayed, while tanks and armoured vehicles drove past us …

Yakubenko was released 24 hours later, but Khomchenko was held and tortured for four days.  He recalls that the building in Makiyivka where he and Yakubenko were taken to had a sign put up by the militants that said it all: “NKVD”.  In one of these ‘NKVD’ rooms he saw a whole array of instruments of torture which reminded him of what he’d read about the Inquisition.

“I was then taken to the Donetsk regional police department.  The bandit who tortured me said that he had come from Belgorod to fight fascism.  Yet again I was bemused: a person nicknamed ‘Bes’ [demon’] is fighting for Orthodoxy, while some ‘Abwehr/ is fighting fascism.  It’s all got mixed up for them.”

They staged fake firing squads three times in the four days he was held prison.  The first time, he says, they put him against a wall and then fired from machine guns over his head.  He thought they would kill him.  “During the first day of my captivity, I saw and heard how they killed Ukrainians.  They shot one from a machine gun, with another they tried out a grenade thrower.  One person was forced onto his knees and shot dead with a pistol.  “

There was a burst of machine gun fire, but the militants had not aimed at him. He can’t say for certain why they didn’t kill him.  “God intervened”.  He knows that the head militant said that they mustn’t hurt the pastor and suspects that they were worried about the publicity since his parishioners had arrived outside this 21st century ‘NKVD’ and began praying loudly.  It was after this that they released him.

The militants were totally drunk all the time.  People who remained in Donetsk say that none of those who tortured him is still alive.

Aleksander Khomchenko is no longer in Donetsk where he knows himself to be on the militants’ execution lists.  Said Ismagilov, Mufti of the Spiritual Directorate of Muslims of Ukraine, commented on Facebook that every word spoken by Father Aleksander was the truth.  “Only in the interview, he didn’t mention that after the terrorists freed him, he came to me in the mosque to tell me I must leave Donetsk immediately.  When he finished his warning, I had no idea that this was no longer the Father Aleksander with whom I had stood at the Prayer Marathon, but a man who had been taken to be shot three times and mercilessly tortured.”