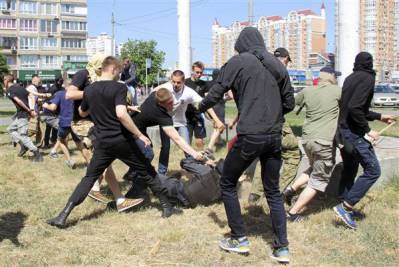 Nine months after an Equality March in Kyiv was attacked by right-wing homophobic thugs, four men have received 2-year suspended sentences.  No hate crime component was taken into account and the defendants were deemed to deserve a milder sentence for their ‘sincere remorse’.   Ukraine’s Gay Alliance points out that the men had consistently denied any guilt, and that even after agreeing to cooperate with the prosecutor and admit guilt, the four men openly demonstrated their intention to continue combating what they call ‘homopropaganda’.

It would be particularly baffling if these are the only cases that are to reach the court since this was an unprovoked attack on peaceful demonstrators with at least five police officers injured during the march and about 10 participants who were set upon after they dispersed. One officer could have died of his injury.

The Obolon District Court on April 8 found Oleksiy Protokovilo (aged 26); Danylo Dashevsky (41); Kyrill Vilyamovsky (21); and Vitaly Kyrylchuk (38) guilty of group hooliganism involving resistance to representatives of the authorities carrying out their duties.  The charge under Article 296 § 3 of the Criminal Code carries a sentence of between 2 and 5 years.  In this case, the defence asked for a suspended sentence, asserting that the men had all admitted guilt and were ‘repentant’.  The court agreed that these were extenuating circumstances and gave 2-year suspended sentences.  It seems unlikely that this ruling will be appealed.

It is easy to understand the Gay Alliance observers’ frustration.  It is not clear what, if anything, has happened to more serious charges pertaining to the events on June 6, 2015.

Two days after the events, TSN reported that one person – Dmytro Sen – had been remanded in custody for 2 months.  He denied attacking police officers.  Seven people altogether were detained over the attacks.  .  Seven people had been detained and were all reported to be charged with ‘hooliganism’, though with a possible sentence of from 3 to 7 years.

If any of the other cases are still continuing, then they appear to be far from reaching the courts.

The four defendants are all members of the Ukrainian ultra-nationalist Right Sector party and until their sudden ‘attack of remorse’ had behaved in a very different fashion during the court hearings.  They had backing from other Right Sector members outside the court.

Cheeringly, President Petro Poroshenko publicly stated that Ukrainians were demonstrating their constitutional rights by taking part in the march.  This probably prevented any court ban as was unfortunately applied for and obtained in Odesa a few months later.

Some 1500 police and National Guard soldiers were deployed to protect the participants (around 200) of the actual march, and it is indicative that it was police officers who were the victims of the homophobic thugs during the march.  The assailants were reported to have used tear gas, smoke bombs, at least some fire crackers spiked to cause real injuries, and also to have hurled abuse.  One of the officers who formed a cordon between the participants and their attackers suffered a severed artery and for some time was in a grave condition.  Anton Gerashchenko, adviser to the Interior Minister reported that the injury had been caused by an exploding fire cracker, spiked with glass and other items clearly aimed at causing maximum injury.

In short, a number of those who had openly issued homophobic threats carried them through.  Although many of the thugs were detained, not one person was charged either with incitement to enmity and violence, or with hate-related violence.  Four men have appeared in court, and received a lenient sentence on the basis of ‘sincere remorse’ that they scarcely bothered to simulate.