Arrested in Ukraine for being Russian? 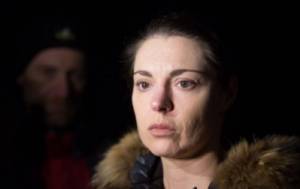 4 months have passed since Anastasia Leonova was arrested in Kyiv and concern is mounting that the 33-year-old Kremlin critic is in detention because Ukraine’s SBU [Security Service] needed a Russian.  Not just one, with the grounds for detaining two other Russians - Olga Shevelyova and Pavel Pyatakov – seeming questionable.

Leonova is from Moscow where she is reported to have taken part in various demonstrations against the Vladimir Putin regime, and in support of Ukraine.  She came to Ukraine in April 2015 and worked on a voluntary basis, teaching first aid skills, to Ukrainian volunteers, first in a Right Sector training camp outside Kharkiv, then later in an Azov Civic Corps training camp.  Her mother says that she became disillusioned towards the end of the summer and moved to Kyiv where she found work as a wine steward.

Leonova’s phone number was found on the mobile phone of Oleh Muzhchil [known as Lesnik] who was killed during a shootout with SBU Alpha special unit officers on Dec 9, 2015, a few hours before 7 people including Leonova were arrested.

If the SBU has any evidence unrelated to Muzhchil against Leonova, they have successfully concealed this from her and her lawyer.  On those grounds alone it would be important to understand who Muzhchil was, however there are other more disturbing reasons as well. 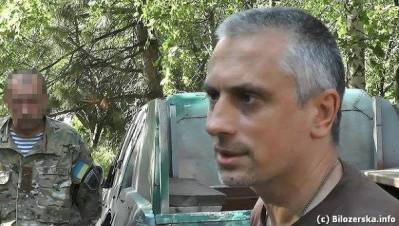 The 50-year-old Ukrainian from Donetsk was a charismatic figure with a curious background which included co-founding the far-right Ukrainian nationalist organization Tryzub; forming the first Buddhist organization in Ukraine and fighting against Russian forces in Chechnya.  He was apparently involved in protests against the regime of Viktor Yanukovych in Donetsk, before joining the Euromaidan protests and then taking part in the ‘Anti-Terrorist Operation’, i.e. the fighting in Donbas against Russian and pro-Russian militants. He did intelligence work for the Right Sector volunteer corps.

Muzhchil had left Right Sector at the end of August 2015.  He had long been in conflict with Dmytro Yarosh, the ex-leader of Right Sector and Ukrainian MP who  Muzhchil considered too willing to cooperate with the Ukrainian government.  Muzhchil was increasingly critical of Ukraine’s leaders and believed the country to be under the control of oligarchs.  After the shootout on Dec 9, Yarosh claimed that Muzhchil had wanted to turn the Right Sector volunteer corps away from fighting an external enemy in Donbas “to terrorist and sabotage activities against the current government”.

The SBU has an entirely different version.  SBU spokesperson Olena Hitlyanska announced shortly after the shootout that a special operation had been carried out during the night of 9-10 December in various cities, during which Muzhchil was killed, and seven people, including Russian nationals, had been arrested.  The latter were supposedly providing “incriminating testimony”.  Preliminary information, she said, was that a sabotage group headed by Muzhchil had been liquidated.  Yury Tandit, advisor to the head of the SBU, called the seven people detained “saboteurs”, and asserted that it had been “established that they were planning terrorist acts in several cities, including an explosion in a Kharkiv court.

The fact that Muzhchil had used fake passports in trips to Russia, the last being in September- October, was allegedly “additional confirmation”.

Right Sector members dismissed this ‘proof’, pointing out that Muzhchil worked in intelligence, and had needed both the passports and the trips which, they say, helped him to expose several Russian cells within Ukraine.  They also note that Muzhchil had cooperated closely with the SBU and Ukrainian military intelligence.  Even Yarosh has said that the SBU must provide evidence that Muzhchil was working against Ukraine.

This is the crucial point.  The reports that large arsenals of weapons were found during the operation are correct, however they were found in only two flats - Muzhchil’s in Kyiv and in a flat occupied by one of the Ukrainians detained in Kharkiv.

Muzhchil is known to have supported ‘radical’ measures against the Ukrainian authorities whose direction he opposed.  No proof of his working for the Russian FSB has been provided.

The arrest of three Russian nationals would not under any circumstances prove a Russian link.  Closer scrutiny of those arrests is of greater concern since it is hard to find any real evidence to even indicate what they are suspected of..

This is most striking with Anastasia Leonova.  She did not know Muzhchil well and the fact that she had ‘liked’ some of his posts on social networks is hardly incriminating.

The charges are of participating in a terrorist group or helping the activities of such a group (Article 285-3 § 1) and of an incomplete attempt to commit a terrorist act leading to significant damage and other serious consequences (Article 15 § 3 and Article 285 § 2).   If convicted, she could face a long sentence, yet the SBU have not provided any specific details of what the ‘participation’ and ‘plans’ are supposed to have entailed.

This did not stop her being remanded in custody.  When on March 5 a court correctly decided that there were no grounds for extending the detention and ordered her release, the SBU challenged this.  On March 15, she was back in detention.

There is disturbingly little to add.  Leonova’s lawyer Viktor Hubsky has already completed an application to the European Court of Human Rights over his client’s unwarranted detention and serious procedural infringements during her arrest and later.   There appears to be just as much justification for challenging the ongoing detention of Shevelyova and Pyatakov.

Over the last 2 years Russia has arrested and tried a number of Ukrainians, as part of its warmongering anti-Ukrainian propaganda.  Almost all of them, including Nadiya Savchenko and Crimean filmmaker Oleg Sentsov remain in prison.

Ukraine must not follow this road, and if the SBU has evidence and specific allegations to substantiate vague claims of ‘participation in a terrorist plot’, it should demonstrate them now.