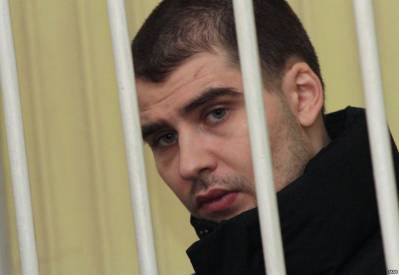 While Russian-occupied Crimea is looking set to convict another former Euromaidan activist of invented crimes over which it has no jurisdiction, efforts are continuing to secure the early release of Oleksandr Kostenko, the Ukrainian now serving a politically-motivated sentence in Russia.

Ukraine’s Embassy in Russia has sent a formal note over the recent refusal to grant Kostenko parole.  The Embassy points to clear flaws in the April 13 ruling, Kostenko’s health problems and family circumstances, and asks that the appeal be given due consideration.   The court rejected the parole application citing Kostenko’s denial of legally absurd charges and the fact that he had been placed in a punishment cell.  It did not take into account the flimsy pretext for a severe punishment (Kostenko was alleged to have not greeted a prison official).  The court also noted in its decision that Kostenko had been placed on a ‘prophylactic register as a person studying, propagating, preaching or spreading extremist literature’.  This was despite the fact that during the court hearing, a prison official had been unable to give any sensible reason for Kostenko being on this list.

The official could hardly admit that nationality and / or political motivation were involved.  At least one other Ukrainian political prisoner (Oleksandr Kolchenko) has also been registered as potentially ‘extremist’.  When Kolchenko tried to find out what this ‘extremist ideology’ was, a prison guard mentioned showing dissatisfaction with the current regime.

The refusal to release Kostenko, a recognized political prisoner, was not unexpected, however the grounds given have been rejected by Russia’s own Supreme Court which will also be pointed out in the appeal.  The court ignored the fact that Kostenko has a small child, and that his mother has suffered two heart attacks since her son was arrested.

Kostenko’s lawyer Dmitry Sotnikov sees both the refusal to grant parole, and the fact that his client has been put in a punishment cell as political.  He writes  that Oleksandr Kostenko, like Russia’s other Ukrainian prisoners, is a victim of Russia’s war against Ukraine.  All of the Ukrainian political prisoners and Crimean prisoners who were illegally ‘retried’ according to Russian law are prisoners of war.  He believes that they will either all be released, in accordance with a political decision, or none.

Sotnikov has lodged a cassation appeal with Russia’s Supreme Court and is continuing the battle against the stubborn refusal to investigate the considerable evidence that Kostenko was badly tortured still in Simferopol.

Oleksandr Kostenko is a Ukrainian citizen sentenced by a Russian-occupied Crimean court to 4 years imprisonment over an alleged offence in Kyiv, before Russia invaded and annexed Crimea.  The court ignored the evidence that his first ‘confession’ had been tortured out of him, and flagrant infringements of procedure from the moment of his arrest.  Subsequent appeals have slightly reduced the sentence which now stands at 3 and a half years.  He has been in custody since Feb 5, 2015.

The Ukrainian Euromaidan activist was convicted of slightly injuring a Ukrainian Berkut riot police office in Kyiv on Feb 18, 2014.  Even if Russian-occupied Crimea had had the jurisdiction to carry out such a prosecution, the charges were also entirely unprovable.   He was, nonetheless, found to have deliberately aimed a cobble stone at the Berkut officer who had suffered a bruise on his left shoulder as a consequence.  Kostenko was supposed to have been motivated by “a feeling of ideological hatred and enmity to law enforcement officers”.

Kostenko retracted all such ‘confessions’ as soon as he was able to see to a real lawyer, and Sotnikov is, as mentioned, still challenging the refusal to initiate criminal proceedings over his client’s torture.