Selective prosecutions as weapon in Prosecutor’s war against reform? 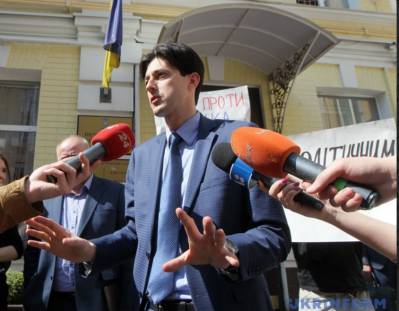 Kasko greeted by supporters outside the court.  The banners bluntly called his prosecution ’reprisals’

The good news that ex-Deputy Prosecutor General Vitaly Kasko has not been remanded in custody cannot remove the deep concern that an attempt was made to jail an outspoken critic of corruption and stalled reforms.

Even if there prove to be grounds for the criminal charges, which Kasko categorically rejects, there could be none for seeking his detention.  Thankfully, this was recognized by the Pechersk District Court in Kyiv, with presiding judge Oleh Bilotserkivets refusing to either remand Kasko in custody or to impose bail.  Kasko was ordered to give a personal undertaking not to leave the city, which his defence lawyer has said that they will appeal.   The prosecutor had asked for either detention or bail of 1.8 million UAH.

The lack of any grounds for the arrest bid still further raises the concern over this entire case.  This was expressed on April 12 in a statement from the Advocacy Advisory Panel, a civic initiative of Euromaidan victims’ lawyers who are strong advocates of real law enforcement and judicial reform.

“The entire prosecutor system is showing incredible resistance to any attempts to reform it, and do not balk in this at using even manifestly unlawful methods.

The use of criminal procedures for the purpose of political persecution and to discredit people who have spoken out against corruption and gone against the customary lifestyle in the Prosecutor General’s Office ]PGO] has become common practice.

An obvious example of selective criminal prosecution is the investigation into the ‘apartment case’ against former Deputy Prosecutor General Vitaly Kasko.

An indication of the PGO leadership’s real wish to establish the truth in cases involving the allocation of official accommodation for prosecutor’s office employees would be a total check of the circumstances behind the allocation to all members of the Prosecutor General’s Office and regional prosecutors.

Furthermore, in order to avoid a conflict of interests and elements of bias, such an investigation should clearly be carried out by another investigative body.

Any demonstrations of selective criminal prosecution are unacceptable in a law-based country. “

Similar concerns have been expressed by Khatia Dekanoidze, Head of Ukraine’s National Police, the Legal Aid Coordination Centre and many others.

Kasko is now accused of receiving the right to a former Prosecutor General’s Office flat through deceit and abuse of trust (Article 190 § 4 and 358 § 4 of the Criminal Code).   The original investigation is reported to have been initiated by the National Anti-Corruption Bureau in late January 2016, with the formal criminal investigation begun on Feb 12.   This was three days before Kasko resigned from his post as Deputy Prosecutor General saying that he did not wish to be part of a body where “total lawlessness is tolerated”.

Together with David Sakvarelidze, whom Shokin dismissed hours before his own removal, Kasko was viewed as a key reformer and his resignation was widely regretted and only fuelled calls for Shokin’s removal.

In an earlier blog,  Kasko pointed out that he had undergone a lustration check in 2015 which included a check on whether property had been lawfully obtained.

Kasko has also put forward his explanation of the flat allocations.  He says that during a first period when invited to work for the PGO in 2002, he was allocated a flat sized 19 square metres for himself and his mother.  This was later privatized by his mother.

The second time he returned in 2007 and in 2008 the PGO organized allocation of a three-room flat.  He asserts that this was the first and only official apartment that he ever received, and that he gave correct information about the size of his family etc.

The latter information was needed since, in the same manner that was seen under the Viktor Yanukovych regime, and earlier, the Prosecutor General’s Office has been making all kinds of allegations to the media.  Kasko accuses employees of the PGO of deliberate manipulation, with some documents being divulged, others concealed.

Kasko calls such manipulation part of the style of work of the Prosecutor General’s Office under its head until recently Viktor Shokin.

It is unfortunately a style that was much cultivated during the regime of Viktor Yanukovych.  His Prosecutor General Viktor Pshonka openly stated that he would do whatever Yanukovych wanted.  They in turn were following a pattern seen much earlier.

Since Yury Lutsenko, a victim of selective prosecution under Yanukovych, has now expressed ‘willingness’ to become Prosecutor General, it is worth recalling that in 2008, as Interior Minister, he was also implicated in criminal investigations initiated for political pressure and / or revenge.

As the Advocacy Advisory Panel suggests, a probe into the allocation of prosecutor’s office flats would almost certainly uncover a large number of such cases.

There are no attempts to do so.  The investigation against Kasko began days before he resigned in February in protest at stalled reforms.  He had been vocal in his criticism of Shokin and of a system where the Prosecutor General spends so much time in the President’s Administration.  He was also known for his efforts to fight corruption within the system.

This background must raise questions, and the concerns can only be heightened by the unlawful damage caused to Kasko’s car prior to an attempt to read out criminal charges late on Sunday evening in a Kyiv street, and the entirely gratuitous attempt to jail him.