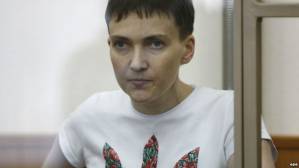 Nadiya Savchenko, former Ukrainian military pilot, current MP and delegate to the Parliamentary Assembly of the Council of Europe, has been on dry hunger strike for 9 days.  She is receiving intravenous injections, but her lawyer Nikolai Polozov wrote on Thursday that she will be refusing to accept these from Friday.

Polozov was forced to wait 5 hours before being allowed to see Savchenko on Thursday, and her sister Vera was not admitted.  His Facebook post has been translated by Voices of Ukraine.

British journalist Sarah Rainsford reports that during his yearly televised interview, she asked Russian President Vladimir Putin whether he would free or swap Savchenko.  He responded that Moscow and Kyiv are in touch regarding her fate, but that we can’t ’jump the gun’.

You couldn’t get much more inappropriate.  The demands from the international community for Savchenko’s release have been coming since soon after she was abducted to Russia and placed in Russian detention.

This is just the latest, sent by 47 European Parliament deputies, and cheeringly blunt.

We, members of the European Parliament, address you in order to express our strong protest concerning the "trial" of Nadiya Savchenko, a Ukrainian citizen, military pilot and member of the Verkhovna Rada of Ukraine and the Ukrainian delegation to the Parliamentary Assembly of the Council of Europe. We want to convey to you that we will never recognise the verdict against Nadiya Savchenko, which we regard as illegal and fabricated. We strongly criticise this politically-orchestrated shameful decision of the Russian court and we call on the Russian Federation to stop violating the international humanitarian law and, in particular, the Third Geneva Convention relative to the Treatment of Prisoners of War of 12 August 1949. We also wish to remind you that under the Minsk Agreements the Russian Federation has agreed to the exchange of all hostages and illegally detained people on the basis of the all-to-all principle and call for its full implementation. We remain very much concerned about an extremely fragile state of health of Nadiya Savchenko, particularly when she has decided to renew a dry hunger strike, and demand her immediate release. We emphasize our determination to continue raising public attention to the case and draw your attention to the strong interest that a larger public has taken in the case of Nadiya Savchenko in the EU and beyond as well as the degree to which the unfair and illegal process against her has harmed the image of the Russian government abroad. Mr President, We point out that this is you who will be personally and directly responsible for not preventing a tragic outcome before it becomes too late. We urge you to show due respect to your own commitments and obligations and immediately and unconditionally release Nadiya Savchenko, as well as Oleg Sentsov, Olexandr Kolchenko and other citizens of Ukraine illegally prisoned in Russia.