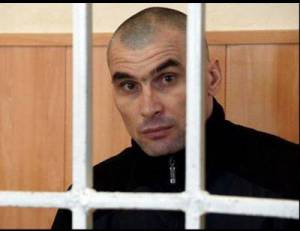 A Russian court is likely on April 20 to sentence Ukrainian Serhiy Lytvynov to anything up to the 9 years in a maximum security prison demanded by the prosecutor.  For being Ukrainian, effectively, since he committed no crime.  The politics in this case, and there is little else, lies in Lytvynov’s nationality and Russia’s undeclared war against Ukraine.  Russia’s Investigative Committee had wanted a high-profile war crimes trial but was defeated by an honest lawyer and the facts.  They came up with an equally sloppy and absurd robbery charge, and it is that trial for which a verdict is awaited. .

Lytvynov is a 33-year-old cowherd from a village in the Luhansk oblast. In August 2014, he had an inflamed tooth that badly needed treatment, and the clinics he would otherwise have gone to in Ukraine were under Kremlin-backed militant control.  He was advised to try a hospital across the border in the Rostov region in Russia, where he was placed in a Russian ward with militants fighting in Donbas.  He was seized from there and savagely tortured, until he signed ‘confessions’ to multiple war crimes which he was supposed to have committed as a member of the Dnipro volunteer battalion.

Judging by the Investigative Committee’s  of the charges against Lytvynov on Oct 1 2014, his trial was supposed to be used as ‘proof’ of Ukraine’s “‘genocide against the Russian-speaking population in Donbas”.

Lytvynov was accused of having personally carried out murders of civilians, including women and children.  The Investigative Committee had even demonstrated a video with Lytvynov ‘confessing’.  It is worth also noting recently, and his lawyer’s comments about Lytvynov, who is not just uneducated, but clearly has learning difficulties.  Lytvynov says himself that he was simply handed pieces of paper to sign.

Lytvynov was immensely fortunate that Viktor Parshutkin agreed to represent him.  Parshutkin succeeded in proving that the impugned war crimes had never taken place and could not have since neither the alleged victims, nor their addresses, actually existed.

The Ukrainian had already been in Russian detention for over a year by that stage and the original charges had been much trumpeted in the pro-Kremlin media, so the investigators decided to find something else to pin on Lytvynov.

The problems are legion:

There is no record of Lysenko having entered Ukraine via a part of the border still under Ukrainian control.

Nor is there anything to indicate that Lysenko owned the two cars, in fact, quite the contrary.  Information from the Ukrainian Prosecutor General’s Office, the Traffic Police and border guard service indicated that the Opel Frontera had belonged to somebody else until 1997 when it was taken off the register.  Its registration number, however, was held by a Zhiguli which the police are searching for.  The other car was registered under a different name altogether (more details here).

Parshutkin tried to get these charges classified as ‘war crimes’ so that they could apply for trial by jury.  Jury members are far more likely to balk at passing an obviously unjust verdict.  The application was unfortunately rejected.

Lytvynov is no political prisoner in any normal sense of the word and would scarcely be able to explain what is happening in the country.  He can, however, and has vividly described the torture he was subjected to.  He is equally adamant that he had never set eyes on Lysenko or set foot in the place where this ‘robbery’ is alleged to have taken place.

The robbery of cars which did not belong to Lysenko and which he only decided to report over a year later, after the previous charges against Lysenko had been proven to be pure fiction.